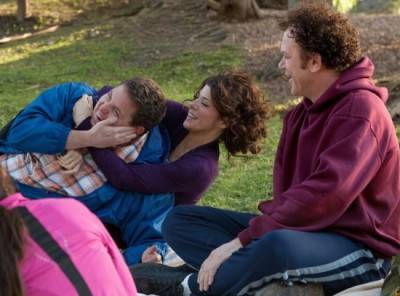 Attention readers: this is a review of the Duplass brothers’ new flick Cyrus, not an Internet rant about how Miley Cyrus is basically taking over the world. If you are interested in All Things Miley, please move along. Otherwise, pull up a chair and stay awhile.

In 2009, Jay and Mark Duplass made a splash at Sundance with their film Humpday, a film which brought greater recognition to the new-ish indie film genre known as mumblecore. Cyrus screened at Sundance this year to generally positive reviews – a fact that is a little bit baffling.

Don’t get me wrong, this film has a certain kind of charm. The cast is pretty great, for one thing. John C. Reilly plays John, a man who, seven years after the break-up of his marriage, still can’t seem to get his shiznit together. Luckily his ex-wife Jamie (Catherine Keener) is a patient soul who forces him to leave the house to go to a party one evening, where in spite of his drunken ridiculousness, he meets a gal named Molly (Marisa Tomei, who practically sparkles in her role – in a non-vampire way, of course). Molly turns out to be a kind-hearted sex goddess, who brings new life to John’s life. Of course, there is a catch: Molly’s 21-year-old creeptastic son, Cyrus, played by Jonah Hill (who really needs to lose some weight, lest he go the way of those other chubby comedian dudes). 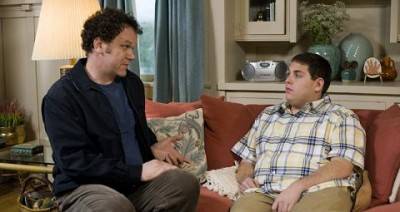 To summarize thus far: this film has fabulous actors in fairly interesting roles, all brought to life by a clearly talented writing-directing duo who are making a noble effort to bring honesty and realism to the romantic comedy formula. Yet, something is still missing.

Take the party scene, for example. John’s not quite cool enough to be there, and he knows it. And given that this film is part of the mumblecore genre, naturally he goes around the party verbally expressing his feelings of inadequacy to anyone (well, anyone female) who will listen. On one level, the dialogue is refreshingly raw and honest – a fact that Molly actually comments on later on in the scene, when she expresses admiration for John’s willingness to put himself out there. On another level, it’s so honest it unintentionally comes across as a bit fake and/or try-hard. After all, in real life, even if one has had an excessive amount of booze, one does not generally start telling random girls at parties how lonely they are. Or maybe that’s just me.

I know film is film and no one should expect it to reflect Real Reality. However, fiction should still ring true to life. Indeed, the overly self-conscious level of honesty throughout the film almost slaps you in the face – so much so that it’s hard to concentrate on anything else. It is possible that this is deliberate, since John as a character seems overly genuine and authentic when we first meet him, and he turns out to be… well, something else entirely. Still, there’s no real excuse for forgoing true character development in a film that is ostensibly all about the characters and their feelings.

In the end, we don’t really get much information regarding the characters’ underlying motivations, especially John. True, we can understand the general, obvious reasons behind their actions, but that is as far as it goes. In this sense, Cyrus sticks to the surface the same way most mainstream romantic comedies do.

If there were more real laughs in the film, all might be forgiven. And while there are certainly chuckle-worthy moments, they tend to be too far apart and counteracted by the borderline creepy undertone of the film.

The main strength of Cyrus is that it’s different in many ways from what we are used to seeing in a romantic comedy – yet it still falls a bit short of its potential. It’s worth a look-see, but be sure to keep any high expectations in check. 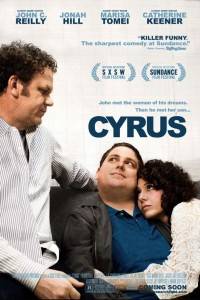