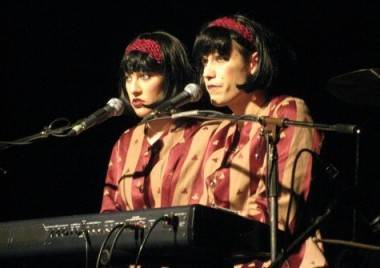 Review and photos -Â Evelyn Evelyn at Venue, Vancouver, May 17 2010

It seems that everyone has a gimmick these days. I remember being in the third grade when rumors were flying around that Bone Thugs N Harmony had sold their souls to the devil to pen “Crossroads”. Who could forget Ozzy’s insatiable appetite for flying furry creatures? Don’t get me started on Lady Gaga prancing around in chicken wire and leather muzzles. I thought I’d seen and heard it all until Amanda Palmer (of the Dresden Dolls) and Justin Webley scurried onto the stage of Venue, under the guise of Eva and Lyn Neville, conjoined twins and musical savants.

After being introduced by their ringmaster, the duo, known as Evelyn Evelyn, descended onto the stage in a candy-cane striped frock with matching severe bobs and pale, frightened looks on their faces. Looking like they were plucked straight out of The Cabinet of Dr. Caligari, they moved into a set of jaunty, vaudeville-style numbers that captured the macabre humor of an earlier time.

The twins each had a hand in playing “Evelyn Evelyn” on the keyboards, while singing about the sorrows of their forced co-dependence. The dreamy, whimsical melody brought to mind Tears for Fears’ “Mad World”, but with a Gothic Rock Opera twist.Â  After readjusting themselves on their bench and wiping down their microphones and instruments in hypochondriac fashion, they regaled their fans with “Have You Seen My Sister Evelyn”, a ragtime tune that displayed the seamless harmonies of the sisters.

The lights dimmed for a moment to cue the story time portion of the performance. With the ringmaster using shadow puppets to illustrate the twins’ tragic entrance into this world, Evelyn Evelyn narrated the tale of their unexpected birth and the death of their parents which led to them being adopted by a vile chicken farmer.

They then strapped on an accordion and began banging angrily on a snare drum and cymbal, for “Chicken Man”, a song dedicated to their abusive guardian. The twins sang more lovingly about their conjoined elephant friends in “Elephant Elephant”.Â  The entire crowd was completely captivated by the pair, appreciating their eccentric slapstick humor.

Palmer and Webley’s improvisational skills were tested as the ringmaster brought the Chalice of Knowledge to the stage, which contained questions from the audience. The twins literally completed each other’s sentences as they tried to formulate answers to pressing quandaries such as “How do you get pandas to hum?”

The pair could not maintain their stone-faced expressions any longer and held their heads low to recompose themselves before responding, “Training pandas to do human things is dumb and stupid”.Â  On that philosophical note, they moved onto the country-and-Western-inspired “You Only Want Me Cause you Want my Sister” and a gospel rendition of “Lean on Me”.

Utilizing digi-drums and synthesizers to match the technological theme of the song, they ended their set with “I Just Want Myspace” before returning for an encore of Joy Division’s “Love Will Tear Us Part”. This concluded one of the most memorable and unique experiences of my life.Â  Here’s hoping their circus caravan returns next year.