Everything you really need to know about Exit Through the Gift Shop can be summed up by the title itself: it is both a literal statement about the way in which the people are directed to exit an art museum or gallery (i.e. you have to run the gauntlet of the gift shop to get out), and a metaphor for the role of Art in our modern, consumer-driven world. Indeed, everything about this film is both straightforward, yet at the same time not quite what it seems on the surface.

At first glance this film is a documentary. However, since the “director” (if you can even call him that) is the notorious street artist known as Banksy, a shadowy figure who has become (in)famous by doing things like sneaking into the world’s most prestigious art museums to hang his own controversial yet brilliant pieces, it behooves us to be a little bit cautious when it comes to deciding where fact ends and fiction (or art) begins.

The narrator (Rhys Ifans) tells us that this is a story about a man named Thierry Guetta, a quirky French fellow who clearly has some type of obsessive disorder because he cannot seem to put down his film camera. Like, ever. Luckily for Thierry’s friends and family, who are understandably sick of him filming their every waking moment, he is introduced, via an LA-based cousin, to a burgeoning underground art movement called “street art”. Thierry’s cousin is known in the street art world as Space Invader, so named for the space invader-style art pieces he plasters onto public buildings. Space Invader takes Thierry along for the ride during his mostly-illegal art adventures, and in the process Thierry gets hooked on the adrenaline rush, all the while obsessively filming everything that happens. 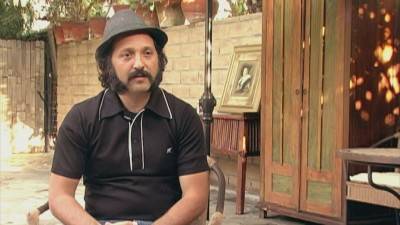 Thierry Guetta in Exit Through the Gift Shop.

Through his cousin, Thierry gets to meet, film and provide look-out services for some of the stars of the street art scene, including folks like Shepard Fairey, who was later made famous by his iconic “Hope” poster of US President Obama. At a certain point, these street artists get curious about what, exactly, Thierry is planning on doing with his reams of footage. Naturally, Thierry tells them he plans on making a film about street art. It’s at this point that we wonder if Thierry’s film about street art is actually this film about street art. No matter, Banksy periodically appears on-screen, albeit cloaked in darkness and with his voice altered, to guide us through the story. 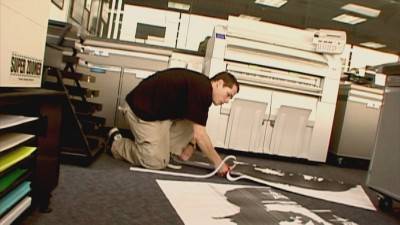 Shepard Fairey in 2000 (from Exit Through the Gift Shop)

Not that we can take everything Banksy tells us at face value. He claims, for example, that he believed Thierry was the real deal, as far as film-making was concerned, and that’s why he let Thierry tag along during his own exploits. That’s a little bit hard to swallow, though, given that it doesn’t take a genius to see that Thierry is not exactly the sharpest knife in the drawer. Indeed, there is evidence to suggest that Banksy is using Thierry’s innocence/ignorance of “real” art to call into question the very nature of art itself, which is the subtext of most of Banksy’s work, and the point underlying most street art in general. Or maybe Thierry isn’t exactly what he seems, either – maybe he is really a plant who is in on Banksy’s artistic “joke”? It’s enough to make one paranoid.

The fact that Thierry is often behind the camera when he is ostensibly the subject of the documentary must be noted here. Banksy states at the beginning that the film started out being about him, but ended up being about Thierry because Thierry is “more interesting”. But who could be more interesting than a mysterious man like Banksy, who runs all over the world under cover of darkness, provoking outrage and discussion amongst the general public and the elite of the art world alike? A lovable but dim-witted French guy who likes to film stuff? I fear Banksy doth protest too much. 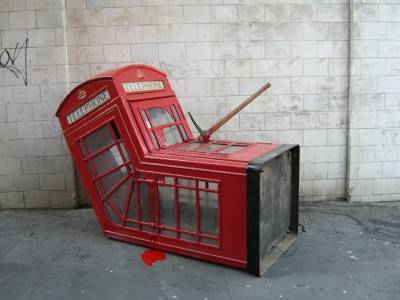 The scene that goes to the heart of these questions involves Thierry filming Banksy as he sifts through what looks like boxes full of English pound notes. The notes look very authentic, save one detail: instead of a portrait of the Queen, it is Princess Diana’s mug that graces the front of the notes. Banksy explains to Thierry that he made the almost one million pounds worth of bank notes with no real idea of what he was going to actually do with them. Eventually, he decided to hand them out to the crowd at a music festival. Of course, the grubby kids he gave them to failed to notice the subtle picture change, and used them as actual currency to buy beer, etc, mostly because the vendors at the concert didn’t notice, either.

At this point, Banksy maintains that he doesn’t know what the heck to do with the “money”, because it’s not really functioning as art – now it’s just counterfeit currency, and he can’t get involved in counterfeiting because, as he says with some irony, that is illegal. Thierry, not surprisingly, doesn’t seem to really get what the issue is. After all, what is the real difference between a cleverly subversive bank note that is ultimately worth money as art, or a fake note that is so artful that it passes for real cash? Where is the line between fake and real anyway? And while we are asking these questions, isn’t it true that art and commerce are uneasy but necessary bedfellows in our world today? 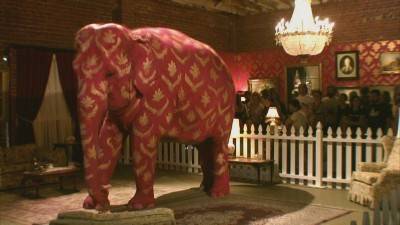 It’s perhaps not too shocking that, by the end of the film, Banksy and his street art comrades patently refuse to give us any definitive answers to these sorts of questions. We leave the theatre feeling somewhat duped yet enlightened, and maybe if the theatre is lucky, we’ll have bought the big bag of popcorn at some point during the show.

One response to “Exit Through the Gift Shop”