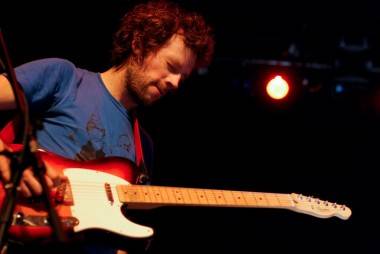 Plants and Animals have a new album, La La Land. The Montreal trio, composed of two Haligonians and one bona fide (albeit, Quebecois) Frenchman have been riding the wave, as they say, since the release of Parc Avenue, their 2008, which helped land them a Juno Award (Best New Band) and a spot on the Polaris Prize shortlist.

We caught up with guitarist Nic Basque in the lobby of a Holiday Inn in Winnipeg, where the indie-band was scheduled to play a show as part of a current tour in support of La La Land (and which brings Plants and Animals to the Commodore, along with Vancouver band Said the Whale, May 5).

Shawn Conner: So you arrived in Winnipeg when?

Nic Basque: We arrived last night, and we had kind of a night off. We tried for an hour to find a restaurant open at 10 o’clock, and ended up in a kind of Irish medieval pub and had a few pints and a dinner of fish and chips. That was our night in Winnipeg.

SC: You recorded part of this record in France. Is that because you’re French?

NB: No no we ended up in Paris because there’s this friend of ours, connected to the label, who recorded there in a studio, it’s not really in Paris but a 20-minute drive from Paris, in a suburb. The guy who owns it lives in Montreal too, his wife is a Canadian, so he travels back and forth between Paris and Montreal.

He saw one of shows in Montreal and really wanted us to come to the studio. He’s kind of like this old dandy type of guy, who’s really into music and has tons of gear. It was fun to go there, it’s kind of a beat-up mansion, not precious, with a lot of good vibes. A really inspiring place to record.

SC: But the songs were written before you arrived in France.

NB: We tracked half of the record in Montreal and half there. Some songs we tracked in Montreal we re-did in Paris. There were two songs that came on the spot there and one song that was in the works but not totally finished.

SC: I was checking out those promo clips [of an unidentified man, whom I took to be one of Plants and Animals, engages in various activities with a pickle] on the Plants and Animals website. Where did the ideas for those come from?

NB: We sat down with the actor in it, Joe Cobden, a friend of mine, and jammed around ideas with pickles and shot the videos in Montreal. Then Joey, he liked doing them so much, when he went for auditions with them in L.A. and he shot more ads on his own and sent them and we’re like that’s amazing. We kind of just bought a couple of pickles and wrote some ideas down and went and did them.

SC: So, why pickles?

NB: Why not? I think Warren [Spicer, P & A vocalist/guitarist] bought this really weird Saran-wrapped pickle,I thinkÂ  in Texas. We found that idea funny and it just went from there, we got stuck with it. We couldn’t leave it. Maybe there’s a mystical reason.

SC: Has the actor got work out of those pickle videos?

NB: [tongue-in-cheek] Oh yeah yeah. He’s making tons of money because of the pickle campaign. It was a gold mine for him. 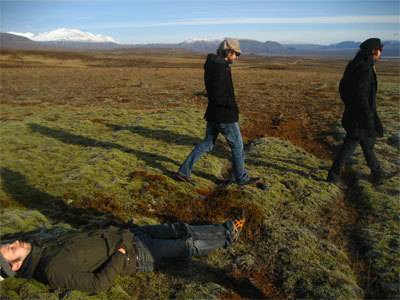 Plants and Animals outside Rejkavik for Iceland Airwaves 2008.

SC: You guys played the Virgin Festival last summer in Vancouver, mais non? Did you play any others?

NB: Yeah, in Toronto and Halifax as well.

SC: From what I saw it looked a little underpopulated.

And Halifax was really well populated because the festival was free because the Tragically Hip couldn’t come because some family member was sick, and they were the headliners. So they [the organizers] made the festival free. But Vancouver, yeah, was really empty. The Roots were supposed to play, but there was a lightning storm so they canceled.

SC: Okay well, I haven’t heard the whole album but we should talk about La La Land a little more… Tell me about one of the songs I have heard, “The Mama Papa”. That’s a fun, dance-y pop number.

NB: That was a hard song to do. We did three versions of it; the first in Montreal, where we were really into a Quincy Jones type of production, even before Michael Jackson died, that kind of percussion and weird production stuff, and we added distorted guitar.

We got really excited about it and about a week later decided it didn’t really work. So we tried again in France, this time with an open drum and big guitar sound. Again, we realized, coming back home after mixing it, it was kind of garage-like. We wanted something that was really groovy and moving forward.

At the end of the mixing process we re-tracked just that song, Warren played bass instead of guitar, I played guitar again, with kind of a Television sound, we pumped up the beat, like Outkast, and we had a good time with it, we tracked some of the vocals live. We did it really quick but with that kind of spirit. We probably had four different versions. It seemed the live energy didn’t translate, it lacked some depth or something to make it less normal.

I don’t know where the lyrics came from, I might have heard him [Warren] say it came from a type of song he learned when he was a kid. And when we were touring in Europe our driver was a 40-year-old anarchist punk from Amsterdam living in a squat in Edinburgh, and he took us there and we’re like, “We’re Plants and Animals”, and they like [bands with names like] Cannibal Killer.

We ended up having a really good night with those guys – there was a lot of beer and good laughs and we played darts. But they won. Next time we’ll beat them. But I think that experience is in the lyrics as well.