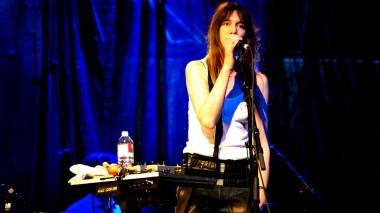 – text and photos by Emmanuelle Prompt

Charlotte Gainsbourg emerged onstage looking all the celebrity she is. This is saying something, given that she is essentially French royalty. (She’s the descendant of Serge Gainsbourg and British actress/vixen Jane Birkin, as well as being a serious actress in her in own right.)

Supermodel-lithe, she wore glitter-striped jeans decorated with patches of black leather and wide belt. She combined this with a white wife-beater (the French probably have a better name for this garment), as well as a black bowtie. The bowtie hung undone around her neck. Her boyish frame was juxtaposed by a very feminine mane of dark hair cascading around her fragile features and down her back. She walked to centre-stage, with her five-piece band behind her. She stood for a moment in what seemed like an awkward stage stance, her shoulders stooped photogenically. She might have been posing for Vogue or Elle.

This was the first stop on Gainsbourg’s first North American tour (I was told by a quasi-reliable source it is her first tour ever). Unfortunately she had some real indie competition that night. The competition came from Spoon, playing around the corner at the Orpheum, and Passion Pit up the street at the Commodore Ballroom–and from her own band.

She was here to promote her third album, IRM. The French acronym for “MRI”, the title is an homage to the sounds that inspired it – after a water-skiing accident, Gainsbourg found herself fascinated with the computational sounds of the medical equipment. Beyond this, she found inspiration in Beck’s music, whose arm she twisted to produce the album and who collaborated on much of the content. His sound is unmistakable (in a good way) on her single, a Starbucks iTunes pick of the week, “Heaven Can Wait”.

Back to the show, and the moment of truth. The French singer-actress-beauty reached for the microphone and, without addressing the audience, opened with a song off IRM. With eyes fixed on the floor, she moved self consciously to a forgettable rhythm. After a few songs, which had her swaying stiffly, it became clear she was musically overpowered by the band and unsympathetic sound mix. Her voice, whispery soft and gentle as Bambi’s eyelashes, was only evident when the musicians, including some of Beck’s sidemen, didn’t overpower her.

A quick caveat: I left the show early for personal reasons. But, I can’t say I was feeling overly compelled to stay. Charlotte Gainsbourg, who seems as lovely as she looks, with her demure grace and her flittings of “thank you” to the audience, is not as edgy as she might have been given that her first foray into the spotlight at 13 had her singing a duet with her father called “Lemon Incest” (a French play on words).

Then there was the boldness she displayed in her role in Lars Von Triers‘ Antichrist, which won her Best Actress at Cannes last year. Instead, she came across on Sunday as fragile, self-conscious and sincere. Unfortunately, I needed a little more drama onstage to forget my own.