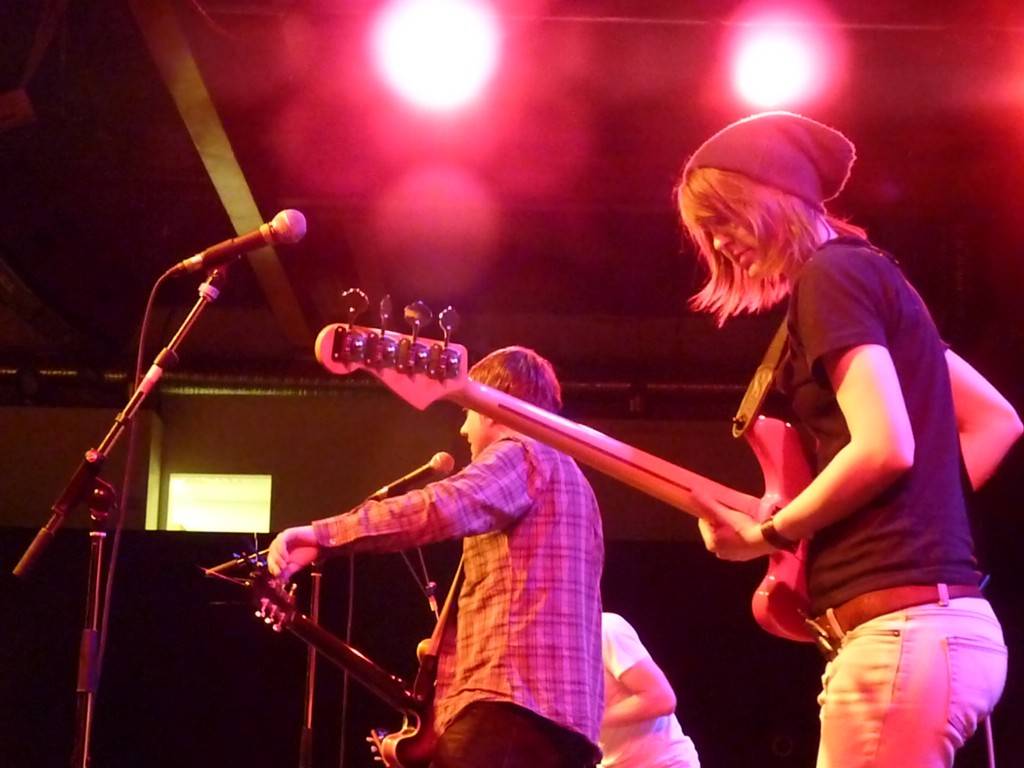 “Alright who wants to get their crunk on?” inquired lead vocalist and guitarist Chris Connelly. “Three people… cool.”

Hot Panda started off the Cultural Olympiad portion of the Paralympic Games with a modestly short set at Hive 3, an experimental theatre showcase. The quirky Edmonton quartet, which used to rehearse in a coffin factory and tour in a ’77 ambulance, is in town recording the follow-up to 2009’s Volcano… Bloody Volcano before heading off to SXSW.

Fake trees mounted on green platforms with white paper flowers and dainty Xmas lights strung through their bows created a decidedly intimate and whimsical atmosphere. Coupled with the tea lights on tables, the space at the Great Northern Way Campus seemed much warmer than it had been during the Belle Orchestre show.

The extremely eclectic foursome, whose music pays tribute to the more experimental and lo-fi end of Brit-pop, was full of energy, stomping around the stage vibrantly. Connelly’s gritty yowl combined with drummer Maghan Campbell’s driving beat and guitarist/accordion/keyboardist Heath Parsons’ almost alien effects as the crowd clapped and swayed along, the braver among them moving closer to the stage to dance.

It was a night of firsts for Hot Panda, as bassist Catherine Hiltz explained. “I even had the opportunity to try live squid today,” she grimaced. “I didn’t, but that was a first. Eww…”

The band opted to play very little from their back catalogue, instead taking the opportunity to “road-test” songs from their upcoming effort. The newer tracks were a little more rocksteady than the more experimental direction of their previous work. But it was still upbeat and intense, the strains of the last track bringing the band to its collective knees.

The new album should be one to mark your calendar for.

One response to “Hot Panda at Great Northern Way Campus”