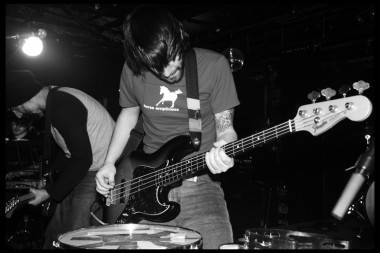 Review and photos–Appleseed Cast at the Biltmore Cabaret, Vancouver March 9 2010

Nothing spectacular happened on stage, and this lack of showmanship emphasizedÂ the Appleseed Cast’s outstanding musicality and poetic lyrics. Whether members of the audience were familiar with the band’s music or not, it was evident they were enjoying the set, with most people bobbing their heads along with the tenacious drumming or raising their hands to affirm their approval.

The Appleseed Cast’s music has the feeling of a quilt: the listener is immersed in the different textures of the grand, symphonic pieces,Â  all while experiencing the very human warmth and intimacy in songs like “Bird of Paradise” or “Steps and Numbers”.