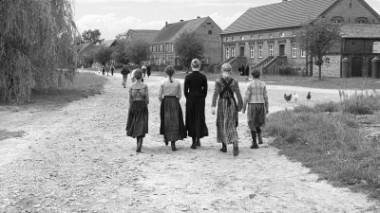 “Was this your first… Haneke?”

So asked a friend after I revealed that having screened the film hours earlier, I was still feeling lusty and ravenous; an odd (but not entirely atypical) reaction, rooted in my own weird pathology. Movies that explore and peel away the many layers presented by “The German Problem” – especially German-language productions – do tend to get me a little hot. Throw in a colourless palette, historical accuracy, a smattering of rigid, repressive role-playing and I’ll breathily ask you to kindly light my cigarette when the credits roll.

Michael Haneke’s The White Ribbon won the Palme D’or at last year’s Cannes Film Festival, won best foreign-language at last week’s Golden Globes, and is nominated in the same category at this year’s Academy Awards. It would be remiss to deem it anything less than wholly deserving of such accolades. This film is cold, dark, complicated and almost entirely devoid of any warmth at all – in spite of its banal delivery I found myself subconsciously engaging with the subjects and the many implications days later. This is, by no means, a “light” film. 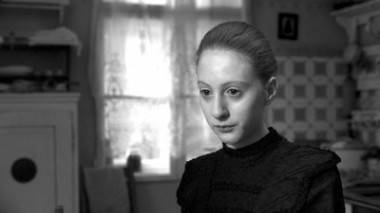 Anna (Roxane Duran), the doctor's daughter, in a scene from Michael Haneke's The White Ribbon.

Set in a small village in Northern Germany, the story is recounted from the memory of the local schoolteacher who bore witness to a series of strange events on the eve of the First World War. The increasingly bizarre and disturbing nature of the happenings are so unusual as to initially suggest a kind of supernatural element, as everything about the people and their society seems nestled in a kind of placid utopia. The mystery grows and the incidents continue, cutting through the very fabric of the town and its people. As The White Ribbon‘s threads unravel so to do the closed-door intimacies of those whose lives are so intricately woven together, and it is through the frayed layers that the truth is revealed.

History’s revisionist eye sees The Fatherland’s ‘tween years through a lens filled with numerous superficial scratches that, in the decades to come, would ultimately crack and break into an infinite number of the most deadly of shards. Focusing on the perceived stability of the pre-war era for possible clues or to that society’s unimaginable upheaval is not unique, though doing so would be myopic. By utilizing a narrative witness to events – in this case, the schoolteacher is revealed as something of an outsider – Haneke is able to project a reflective experience, one in which the audience is positioned to experience and understand the ever-increasing, foreboding nature of the events as they are revealed in the context of the story which deftly creates an intimate portrait of individuals and numerous relationship dynamics. 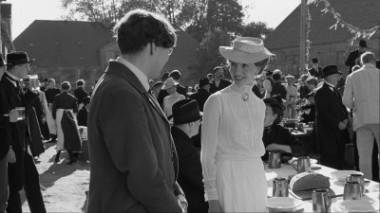 The Baroness (Ursula Landi) from Michael Haneke's The White Ribbon.

It is impossible to watch The White Ribbon and not view it through the prism of “The German Problem” and what we know of the ensuing decades. The impression of (ruptured) Prussian particularism is a critical component of the story, and offers a ready backdrop for the structured social dynamic and interpersonal relationships that make up of several of the more memorable characters – the unnervingly strict and emotionally abusive village minister whose own paternal duties include doling out humiliating punishment to his children, an aristocratic wife desperate to abandon the dysfunction of the town and her marriage, an angry farmer looking to avenge what he feels is a wrongful death, a gang of rebellious children with their own agenda, subculture, and semiotics.

Haneke builds his characters and their stories before ripping them apart, and what is left in the rubble is a jagged, abstract truth less concentrated on a particular time and place and frighteningly universal in its foundation. Much like the way Lars von Trier’s Dogville was not contingent upon its being set in a town in Colorado, The White Ribbon‘s underlying story is not dependent upon its setting, though the town does provide a fitting backdrop. Those looking for the impossible – answers, or clues to the Third Reich – will be disappointed. 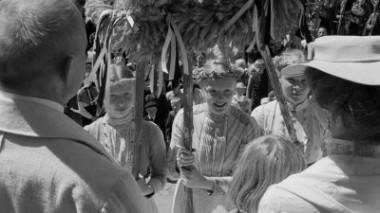 Pinpointing one of (if not the) the most remarkably profound social failures of the 20th century to some specific moment or cause is a fanciful, if not misdirected, pursuit and those who are looking for answers here are better off reading Thomas Mann’s multi-generational epic Buddenbrooks. Avoiding the conventional tone of magic-realism that commonly envelopes films of this ilk (The Tin Drum, Europa, Europa) in favour of stark truths results in a film that is far more revealing, frightening, honest, and brave yet thrilling, satisfying, and exhausting.

I’ll have that cigarette now, thanks.