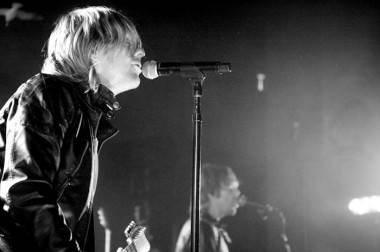 Switchfoot at the Commodore Ballroom, Jan 13 2010

The California alternative rock group Switchfoot drew an outstandingly surprising turnout to Vancouver’s Commodore Ballroom on Jan. 13, for what was an apparently soldout show. From the balcony, there didn’t appear to be an empty space on the floor, or an empty chair–even at the very back of the bar we were pressed up against the walls. The place was filled with long-time Switchfoot fans of every age, who knew the words to every song.

It had been ages since I’d last heard anything about the band, so I jumped at the chance to review last night’s show. The endearing Christian rockers quickly had me reminiscent of my days at Cedar Park Church youth group. I remember borrowing their A New Way to Be Human album from my youth pastor and listened to the title track on repeat. I accidentally forgot to ever return that album–might have to dig it up for a listen for old times’ sake, or possibly return it at some point.

The five-man band doesn’t really market themselves as a Christian band, and if you don’t listen carefully to the subtly spiritual lyrics, the fact that in more than half the songs the guys are singing about God, rather than a girl, is easily overlooked–which is oddly refreshing.

Lead vocalist/guitarist Jon Foreman, the epitome of a stereotypical tanned, blonde, Californian surfer, had the audience entranced throughout the two-hour set with the help of Drew Shirley on guitar alongside Jerome Fontamillas on guitar/keys as well as Tim Foreman on bass and Chad Butler on the drums. The band created an incredibly loud and fabulous sound.

It may have been my six years of Christian schooling but, something inside me feel guilty when my friend offered me shot of tequila during “Let That Be Enough”, one of the band’s best-written acoustic ballads, with very powerful lyrics:

Apparently I wasn’t the only one feeling guilty–the back bar had only sold $300 worth by the end of the show, probably some sort of record for the Commodore. During “Only Hope” the crowd barely moved and stood mesmerized, and rightfully so. With the lyrics as heartfelt as those, it would have been slightly out of the ordinary in the moment to do anything but give the band your full attention.

And the audience seemed to love the new songs. Switchfoot’s seventh album, Hello Hurricane, released in November of last year, has a calmer sound than the band’s previous work. But “Mess of Me” was as well-received as older classics like “Meant to Live”, “This is Home”, and the beautiful acoustic ballad “You”, the signature song from the heartbreaking movie, A Walk to Remember, for which Switchfoot did nearly the entire soundtrack.

At one point, though, a girl nearby shouted toward the dance floor, “Look at these people, they could be at a funeral and they wouldn’t know the difference.” She was somewhat accurate in her statement, as it was a very calm crowd, but they were just sort of there really listen and enjoy the music, rather than the usual drunk and rowdy Commodore crowd.

And Foreman did create some excitement when, at one point, he left the stage to walk through the crowd to sing an entire song on top of an amp in the left side of the room. He grabbed the fans’ hands throughout, and had everyone clapping along, waving their arms and dancing a little by the end of the night.

Finally, for the encore, Switchfoot played a version of it’s best known song,“Dare You To Move”, that was amazing.

I haven’t one complaint about the entire show–the band was flawless. Switchfoot is back, without a doubt, and with a fresh start and arguably one of its best records yet. This could most definitely be somewhat of a new beginning for the band.

I think I just might go back to church this Sunday.

4 responses to “Switchfoot at the Commodore Ballroom”