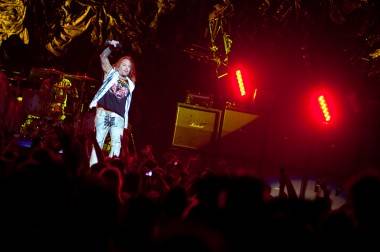 Out of consideration for Snipe readers and persuaded by its editor, an effort was made to catch (most of) the Joe Perry Project, the openers for MÃ¶tley CrÃ¼e.

Joe Perry Project –Â I can’t say that my expectation of the eponymous outfit was shattered by the experience of seeing them live. Of course, Joe Perry is a certified Rock God and I can’t deny a quiver of excitement coursed through me just from being in the same space of him as he performed. Overall the set and their sound was predictably bland, playing like rock and roll bÃ©chamel that was just missing… something (like, say, Steven Tyler and the rest of Aerosmith).

As Perry wails away, a man in his mid-50s sporting a David Crosby coif, aviators, and a black sweatshirt emblazoned with “Guinness” stumbles down the stairs to my left and lands on the young girls in front of me. He’s apologetic and I’m impressed that he didn’t spill his beer, which he clearly shouldn’t be drinking as it appears he’s in his third trimester. Watching the man make his way down the stairs, I think about Richard Linklater’s Dazed and Confused, and wonder if Pink Floyd and his crew would have driven overnight to get tickets to see Perry, or if they’d still care.

The music itself is honest-to-goodness background “rock” music. It is short on melody and long on extended solo noise, clichÃ©d in a way that would best be suited for inoffensive inclusion on a soundtrack to some ’80s flashback scene in a Lifetime movie-of-the-week that calls for “generic ambient rock.” The songs are all structured around tiresome guitar solos, and I can’t imagine getting any of these songs stuck in my head. I am not engaged for the same reason that I’m not likely to ever find myself at a Joe Satriani concert: it’s just not my thing.

The lead singer (whose name I am unable to locate on Google), however, does manage to engage the interest of both me and my guest, Mikala. He is very stiff yet his movements are perfectly postured. He is not front-and-center, like most lead singers, because after all this is the Joe Perry Project. A glorified back-up singer singing the sweetest karaoke gig ever, his tight black pants (stitching up the sides!), pointy black shoes (is that a Cuban heel?), and mildly bedazzled shirt completes an ensemble that is, sadly, perfect. The awkwardness is made more fantastic when he turns around, his back to the crowd as he pumps his extended jazz hand into the air and deftly plays his invisible air guitar beside Perry. The irony is not lost on Mikala and I.

Bass player Dave Hall launches into a really long solo, pounding his enormous guitar with such fervor that by the time he is done there’s a huge wet spot on the stage and I am concerned the singer may slip (heels!) and fall. Perry finally defribilates the waning crowd with an electric charge of “Walk This Way” and I have to say, it was kinda cool (yet kinda not) to hear live. With our collective pulse revived by the anthemic Aerosmith classic, Perry takes the moment to ensure we recognize his status by reminding us just who he is, by ending the set with a fist-pumpingly awesome and potentially dangerous manouevre I haven’t seen in a while, the veritable Iron Lotus of Rock Guitar God moves – playing behind his head.

MÃ¶tley CrÃ¼e –Â When presented with the opportunity to see MÃ¶tley CrÃ¼e in concert my immediately positive reaction was driven more by a desire to partake of an experience – the crowd-watching, the churros, the pyrotechnics, potential band antics – than the music itself.

The band is a product of a bygone era whose musical contributions onstage have surely been eclipsed by the members’ offstage reputations, which have been shamelessly (some may say bravely) acknowledged in their best-selling catalogue of bad-boy behavior and the uglier pitfalls of the rock-star lifestyle, The Dirt: Confessions of the World’s Most Notorious Rock Band (2001).

Though MÃ¶tley CrÃ¼e has never appeared as more than a background blip on my own personal musical radar, they do encompass an era of myÂ  youth that I have some vague memory of, one I was too young to really participate in but recall regardless. Besides, my inner-ten-year-old was excited at the prospect of actually hearing them play “Unskinny Bop”. 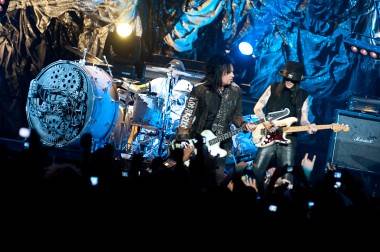 Half the fun of seeing a post-prime band like the CrÃ¼e in concert lies in crowd-watching, and this was no exception. Not surprisingly, the predictable sausage-fest was littered with a smattering of fishnets, animal print, silicone, and inappropriate footwear. It was hard to tell the difference between those who’ve chosen to celebrate the night by dressing up (mullet wigs, bandanas, acid-wash denim jackets with the arms cut off) with those whose ensembles are inherent rather than ironic (that ain’t no wig). In the interim between the Joe Perry Experience and the headliners, several men were escorted by security from the floor and a fascinating anthropological display that I can only describe as a “boob off” ensued, wherein several women from the center of the floor section, spurred on by the testerical crowd, flashed their tits for all to see. Stay classy, Vancouver.

As the lights dimmed to AC/DC’s “Highway to Hell”,and the Ramones’ “I Wanna Be Sedated” slowed to an ugly stop, interrupted by the siren-like wail of Mick Mars’ guitar, GM Place was instantly transported back in time to the tune of “Kickstart My Heart“. The curtain dropped, Tommy Lee started crashing on the drums and the pyrotechnics punctuated every utterance of Vince Neil’s nasally “Whoa, yeahs!” The CrÃ¼e’s high-energy set came on crazy, fast, and hard, remaining pretty solid for the rest of the show and healthily delivering what was expected.

“Kickstart” was followed by two of their biggest hits, “Wildside”and “Shout at the Devil”, a wise choice which proved to invigorate and hold the audience’s attention. Wearing tight white pants enhanced by a black lace-up crotch, Neil skipped around the stage at full-speed, encouraging and interacting with the crowd like any ringmaster. If he hadn’t grown up to be the lead singer of MÃ¶tley CrÃ¼e, he would have found great success as either an aerobics instructor or as the guy who runs rides like The Avalanche at carnivals, asking in pitch-perfect-screech if they want to go “FAAAAAAASTER” or “BAAAAAAACKWARDS.”

By the fourth song, which Neil introduces as “something from the new record” (MÃ¶tley CrÃ¼e has a new record?), my ability to hear has been compromised and though he did say the name of it, judging by the mini-Exodus it may as well have been called “Beer Run”, which was too bad because it was followed by a stellar guitar solo from Mars. Bathed in a purple haze of residual pyro smoke and mosh-pit marijuana, Mars entranced with a section of exquisite musicality that showcased authentic prowess. As he moved deftly between Jimi Hendrix and what sounded like a selection from Beethoven, I am awe-struck by the sheer artistry of the moment. At 65, Mars assured that rock is definitely not, to quote the sneeringly cynical Vancouver Sun, “a young man’s game.” (Anyone who authors such a statement is, in my humble opinion, in possession of a polluted soul and has no business covering anything.)

The rest of the show is predictably on-point, and not in a bad way. Neil straps on a guitar and starts to strum acoustically and my inner 10-year-old gets excited because I used to love “Every Rose Has its Thorn” [Poison. -Ed.] but haven’t heard it for ages (I’m wrong, it was “Don’t Go Away Mad (Just Go Away)”). Tommy Lee steps out from behind the drum kit with a bottle of JÃ¤germeister in hand, praises “B.C. bud” and is rewarded with numerous joints and lighters thrown his way. He sends the bottle into the crowd and encourages them to “pass it back,” and I shudder, thinking about the cooties. If the Centers for Disease Control note an unusual spike in strains of herpes simplex not seen since the 1980s, I’d advise them to look no further than Tommy Lee (perhaps not for the first time).

He then crouches down and asks for a moment of silence for Haiti, and the crowd does go quiet. It was an odd moment that I hadn’t anticipated and I wonder about his motivation before hating myself (a little) for being so cynical. Lee then rises and picks up the joints, gratefully thanking the anonymous benefactors, saying “Somebody’s getting fucked up tonight!” which may have been true given the rather sedate and seemingly sluggish state of the mosh pit.

By the time “Girls, Girls, Girls” rolls around I’ve had lots of fun and have forgiven them for not playing “18 and Life” [Skid Row. -Ed.]. For the encore a piano is brought out and Tommy Lee plays a few notes of “Home Sweet Home”, but something goes technically wrong and it doesn’t go off quite as planned. Vince Neil, wearing a Team Canada hockey jersey, sits down beside him on the bench, offering a conciliatory hug while the band plays on, Lee visibly disappointed in not being able to play it as intended. It’s a nice and oddly sweet moment, a glimpse into the dynamics of a band that will be celebrating 30 years together next year.

The crowd cheers after their sole power ballad, but not before Lee runs back behind the drum kit and starts pounding away at what some consider MÃ¶tley CrÃ¼e’s swan song, “Dr. Feelgood”. The attack on the collective aural conscious is undeniable, with Lee taking out his frustrations on the drum kit. His extended arm-span is impressive and I distinctly detect cowbell, but in the flurry of his constant pounding I can’t see him hitting one, and wonder whether he’s been endowed with some sort of third arm…

All in all I had a great time, and walked away impressed. I don’t see the CrÃ¼e popping up on my iPod playlists anytime soon, but I can’t deny that they put on a totally satisfying show, best enjoyed as an experience where they belong – in an arena, not my headphones.