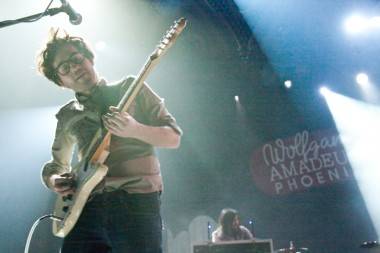 Phoenix with the Cultural Olympiad, Jan 22 2010

As I entered the Orpheum last night, it became instantly clear that something special was about to take place.

The air was crackling with excitement as I weaved my way through a sea of oh-my-gods and dude-I’m-so-stokeds to check my jacket. The feverish anticipation that hung heavy was epitomized perfectly by the gentleman in front of me who stated that he had dipped into his rent money to buy an exorbitantly expensive ticket off Craigslist. The Phoenix hype machine was in full effect well before the French quartet played its first note.

Touring their highly publicized fourth album Wolfgang Amadeus Phoenix, the boys from Versailles quietly converged upon their instruments with little introduction. None was needed as they delved immediately into “Liztomania”, a punchy little dance number driven by sparkly keyboard rifts spread thinly over a solitary bass line. Lead singer Thomas Mars playfully cooed his way throughout the night eliciting screams and dance parties with his laid back- almost nonchalant attitude.

This is akin to Phoenix’s massive appeal as their “Frenchiness” allows them to be mildly pompous at times – in fact it’s almost expected. It allows for the seven-and-half-minute “Love like a Sunset”, an instrumentally complex suite, to seem perfectly acceptable. Not to mention the blatant piece of soft-rock homage “Fences”, which could no doubt chart on any adult contemporary listing.

With no boundaries to confine their creativity, every song comes across so wonderfully playful that you can’t help but stand up and dance while grinning immensely. “Rome”, a personal highlight, saw dueling guitarists Christian Mazzalai and Laurent Brancowitz, draped in deep purple backlighting, playing jittery figures that mimic sequenced synthesizers. Matched with Mars’ graceful vocal delivery, it’s a brilliant piece of rhythmic trickery that shows the band’s high attention to detail.

Mars’ brooding solo opening of the encore was the most melancholy point of the evening and even that came across as sounding jubilant. It’s as if Mars’ personal expression seems naturally suited to happy pop music. At this point the audience’s infectious love for the band boiled over as the stage filled with adoring fans.

Completely surrounded by pure gratitude, the now invisible band played “1901”, an ode to early century Paris that incited a near riot amongst the swaying bodies on stage. It was evident as the theatre emptied that Phoenix was successful in their French revolution on pop-rock music. I left wanting to go smoke cigarettes and paint by the river, complemented with some wine and cheese – The Parisian Dream.

One response to “Phoenix at the Orpheum Theatre”