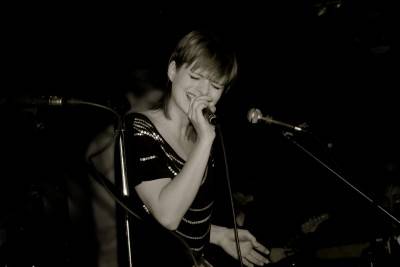 – by Shawn Conner/photos by Emmanuelle Prompt

Laura Smith first came to our attention through a set of photos from this past New Year’s Eve at the Media Club. And since we already had the photos we thought, why not do an interview as well?

It turns out the gamine-like singer/keyboardist had recently come back from tour with Dan Mangan while the Vancouver singer/songwriter’s career experienced a sudden rise. We talked to Smith, about seeing that phenomenon firsthand, writing songs for her next record and how her New Year’s Eve was. 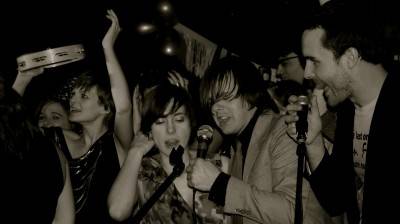 Shawn Conner: So you’re working on your next album. Is it nearly finished?

Laura Smith: No. I’m writing it with Andrew Braun. We’re writing every single day for a couple of hours to have 50 songs together. We have 15 and two more that we’re almost finished.

SC: Whose idea was it to write every day?

LS: It was a twist on a suggestion to write a song a day for 30 days. We went, oh that’s a good idea but really crazy! We want them to be good songs. And sometimes you can’t write a song in a day if you want it to be good, then you’re just settling.

SC: Are you from Vancouver originally, or Victoria?

LS: Uhm, I lived here when I was a kid and I was there for 10 years. I came here to go to Cap College. I have a diploma in vocal jazz.

SC: But your stuff is obviously more pop.

LS: Yeah. And the new stuff is more rock. Andrew’s background is rock ‘n’ roll bands. We both love bands like St. Vincent and Radiohead, sort of like quirky-rock? That isn’t totally straight ahead? I don’t know what you’d call it. But I can’t help write really poppy melodies.

SC: Do you have any guilty pop music pleasures?

SC: What were you playing with Dan Mangan?

LS: I was playing keyboard and trumpet and singing backups. Coincidentally, he did the first One Night Stand [the name of the Media Club’s NYE jam]. This time he was in Australia, singing with I think the lead singer of the Hip. He had to take the better gig. We’ve just known each other for a few years. He helped me get my first gigs around town when I first moved here.

SC: How was the tour for you?

LS: It was insane. Dan is a workaholic. I would’ve died. But it was lots of fun and we went all the way to Halifax. And two days after we got back he went to Europa for a tour that was six weeks long.

SC: He was kind of blowing up at the time. That must’ve been interesting…?

LS: It was really interesting. We knew there would be people at the shows in Western Canada and those were great, and then we went further East and they weren’t that great and a couple weeks later they were sold out everywhere. It was really quite awesome because Dan’s been working so hard so long and he’s really talented. And it’s encouraging to see great things happen to someone like that.

SC: Did any of that have anything to do with your decision to concentrate more on songwriting?

LS: Maybe. Dan actually took a lot of time between his first and second album. I definitley want to do the same thing and make sure it’s exactly what I want and the songs are there.

SC: So how was One Night Stand this year for at the Media Club? It looks like a good time.

LS: I feel so guilty because usually New Year’s isÂ  such a letdown for most people, it’s so built up then it’s just another night you go out and drink. Getting paid to play music and drink is the best!