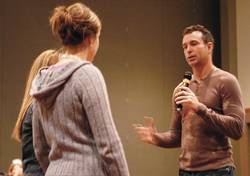 A veteran of the once-booming dating coach industry, David Wygant is the real-life inspiration behind the Will Smith movie Hitch. Don’t hold that against him, though–he’s also been quoted in a variety of magazines and made dozens of TV appearances. The L.A. resident was also featured in Neil Strauss’s The Game, publishes a daily newsletter, holds dating “boot camps” all over North America and, at 47, recently became engaged.

Figuring it’s as relevant as ever, especially as we head into the new year, we unearthed this 2008 interview with the former New Yorker about his rather strange occupation, what makes his coaching and programs (such as the Men’s and Women’s Mastery Series) different, and what men and women need to know in order to become better at dating. Perhaps sites such as Craigslist Texas might also be incredibly beneficial.