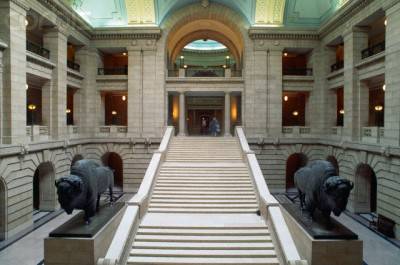 The bison are protective beasts.

When you’re from a misbegotten locale like Winnipeg – which, let’s face it, is unlivable for the majority of the year – you seize on anything that makes your hometown seem exotic, mysterious, and simply interesting.

Published in 2007 by one of the city’s two dailies, The Hermetic Code is a photo-filled coffeetable about the messages hidden (“in plain sight” as per the book) within and outside of the Manitoba Legislative Building, an ornate and imposing edifice begun in 1914 and finished off six years later.

The book itself is a curiosity that is hard to resist – at least until you start reading it. Once you’ve become accustomed to the second-rate potboiler prose of its authors (Carolin Vessely and Buzz Currie), it’s still a chore to read – the “dialogue” is nothing but exposition – but pretty fascinating for all that.

Basically, Vessely (oversharing in the first-person – Currie’s role is unclear) takes us on a first-person tour of the edifice with Frank Albo, whom she takes pains to liken to Dan Brown’s Robert Langdon (Tom Hanks to fans of the movies The Da Vinci Code and Angels & Demons). A specialist in ancient religions and Western esotericism, Albo was working on a paper on ancient magic in modern culture when he spotted a sphinx atop the Manitoba Legislative Building.

Investigating further, Albo discovered more and more symbols and signs (such as measurements) indicating the edifice was built upon Freemasonry guidelines. More exploration and he begins thinking Hermetic Order of the Golden Dawn, and finally another sect altogether. The symbology, and story, touches on occult and religious orders, Greek mythology, the Temple of Solomon, and the Ark of the Covenant. Aleister Crowley, that infamous magician, is mentioned a few times, as is everyone’s fave # of the beast, 666. 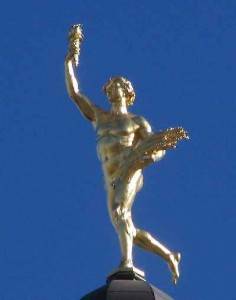 But perhaps the most interesting aspect of the story isn’t the bombardment of symbology and possible ties to ancient orders, but the story behind the building’s construction. A political scandal interferes with the vision of architect Frank Worthington Simon, cutting short his vision of the grandest temple to the ancient mystic Hermes Trismegistus yet built. More wondrous still is the idea that there was a time, before the First World War, where it was thought the potential growth of the city was limitless. 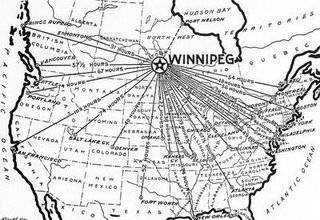 “The new government building was to be a continental showpiece, not just for what Winnipeg was, but for what it was to become,” writes Vessely (or Currie). “And all you had to do was project the growth line to see what that would be – the biggest city on Earth.” Well, it is a nice building. 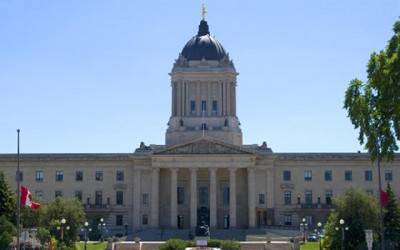 For more info on the occult aspects of the seat of the Manitoba government, read Vigilant Citizen’s article.

One response to “The Hermetic Code”