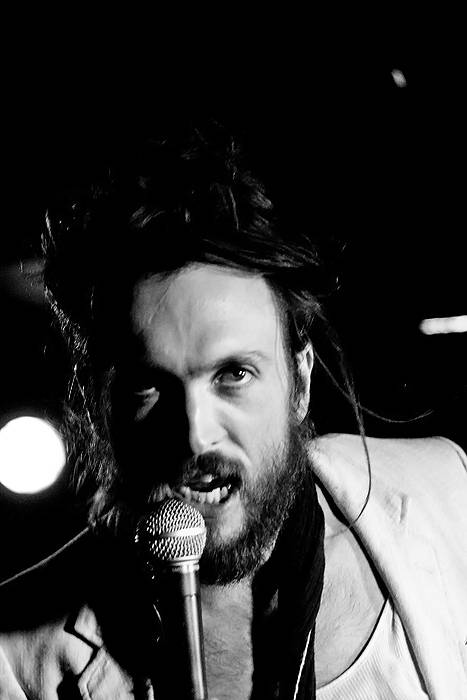 Review and photos – Edward Sharpe and the Magnetic Zeros at the Biltmore Cabaret, Vancouver Dec 8 2009

After its first few songs, Local Natives asked the crowd to move a few steps closer and get rid of the semi circle vacancy in front of the stage; and rightly so. With the majority of the quintetÂ donning mustaches clearly not left over from Movember, the four-part harmonies echoed flawlessly through the room, specifically in their cover of “Warning Sign”, an old Talking Heads song.

With a keyboardist who played a floor tom and crash cymbal with one hand and his synth with the other, the band’s energy only grew. Leading up to the climax, the bandÂ invited three members from fellow openerÂ Fool’s Gold to add percussion. Shakers, tambourines, and instruments I don’t even know the names of being were tossed around the stage. This all led to a Rage Against the Machine-style headbanging riff in which the synchronicity of everyone on stage was just indescribable.

With the last beat, the crowd was left smiling – a hint of what was to come.

With the opening notes of a tenor sax and tribal drum beats, I felt like I was in a Bacardi commercial – you know, the ones with everyone dancing in a tropical club made of bamboo. It didn’t really matter that Fool’s Gold lead singer/bassist Luke Top was singing everything in Hebrew. The eight people packing the stage made it clear that this was about the music rather than a message.

Closing with “Nadine”, the crowd joined in the incredibly catchy melody that had been repeating as the music gradually got softer. With only the percussive instruments left, Top jumped off the stage and started dancing, while the crowd continued to repeat the melody.

The rest of the band joined in on the floor, bringing shakers, floor toms, and giant tambourines into what now resembled a catwalk-runway opening in the sea of bodies. We are all still singing the melody when we realize that the band is done and gone. It is one thing to capture a crowd’s attention, but it’s another to have left the building and still have them playing your song. Edward Sharp and the Magnetic ZerosÂ would have to have something big up their sleeves for an encore to beat that.

“I don’t mean to ignore you…but the floor’s just so beautiful,” mumbles lead singer Alex Ebert, a man with a mystical rock star presence about him. You just know who the boss is as he spastically jumps around the stage in a frantic, Jim James sort of fashion.

As the opening chords of “Janglin’” are strummed on a ukulele, the crowd erupts with the melodious vocal “mmm-bops”. Either everyone in the Biltmore was a drummer or it was just a good night for the tempo gods because the audience’s consistent handclaps were the metronome that drummer Josh Collazo played along to. The smooth voice of bashful Jade Castrinos started off the hit “Home” and ridiculous amounts of jumping ensued. Everyone was smiling, not sure whether to slow dance, headbang, or both.

The crowd was begging for more as Ebert told a story of how he once found a penny which had been printed with mirrored lettering. Excited about this rare find, he went online to look up the value of a backwards-printed penny, only to realize he was holding it upside down. And now it was time for the encore.

Ebert exclaimed they couldn’t really go backstage because, well, there isn’t one. “You’ll see us from where you are so we’re just going to go off the stage and come back on.” For the last song, Edward Sharpe and the Magnetic Zeros did something I thought was impossible: they got the entire audience to sit down on the sticky, beer-soaked, broken-glass covered Biltmore floor as they played an acoustic song with more people from the crowd actually sitting in a pow-wow on the stage.

And they had done it, each band topping the previous’ encore and leaving you with something that you’re going to remember longer than the wait in the coat check line. Now I have to go buy a giant tambourine.