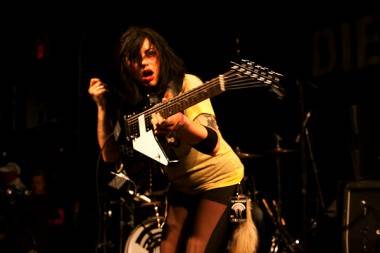 We photographed Die Mannequin when the Toronto punk group kicked off its Canadian tour at Venue in Vancouver, and followed up with a review from the Winnipeg show.

Thanks to Kenzy Elbanna, we’ve also got some shots from the last show of the tour. Says Kenzy: ‘They were playing a fairly large venue [the Sound Academy] but had it set up to be more like an intimate club with a smaller stage. Â It made for an awkward photo pit but a really great intimate atmosphere, and Care [Failure, lead singer] is an incredible performer. It was pretty difficult to even narrow my best photos because she makes every shot so great.”