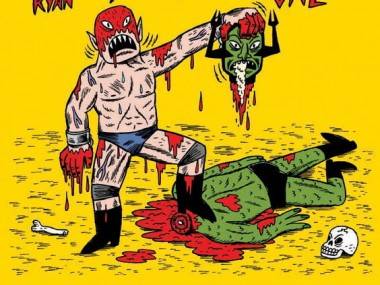 Graphic novel reviews–Prison Pit, Giraffes In My Hair, and more

While we’ve been glued to the TV set watching Nancy Grace expose some poor schlub who left her two-month-old baby in the car while she bought a postage stamp, Seattle publisher Fantagraphics has been trying to save American culture. We hope to change the ratio of Nancy Grace-viewing to comics-reading in coming months. 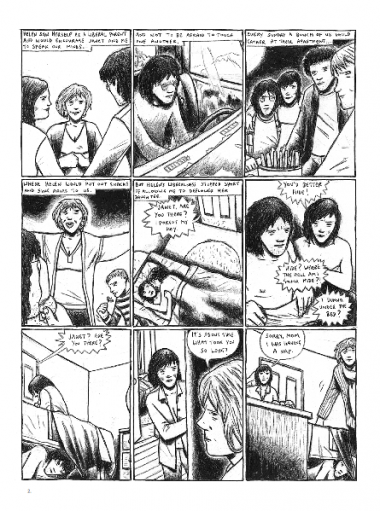 Giraffes In My Hair by Bruce Paley and Carol Swain.

In The Red Monkey Double Happiness Book, South African cartoonist Joe Daly tweaks reality just enough to give his stories about a 20something Everydude some spice. “The Red Monkey” is actually Dave, who has some sort of simian throwback gene that has resulted in feet that are effectively monkey-like. Thus, he can climb trees like no primate’s business, a talent that comes in handy as Dave finds himself immersed in nefarious plots both in his apartment complex and an animal sanctuary.

But none of these movie-ish story lines – featuring conspiratorial industrialists, a hovercraft, and cane toads – are as enjoyable as Daly’s careful, meticulous and quite lovely art, as well as the characterizations of and relationships between Dave, his friends, and even the animals populating these two stories. It’s as if Daly decided his own life was too boring for autobiographical comics, but The Red Monkey Double Happiness Book left this reader wanting to know more about the cartoonist’s real life in South Africa rather than a made-up version. 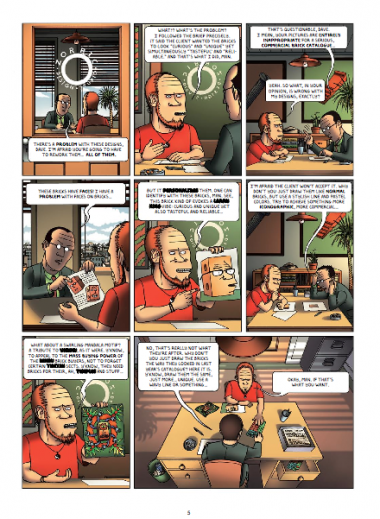 Sometimes it’s best to leave intrigue and mystery to the professionals. In West Coast Blues, Jacques Tardi adapts a Jean-Patrick Manchette crime novel from the ’70s about an ordinary guy (well, ordinary for a French guy, anyway) who, by happenstance, fate, and accident, stays one step ahead of a couple of trained killers. As with all the best pulp fiction, West Coast Blues‘ story is best when it defies reader and genre expectations. Tardi’s black & white art is suitably dark and even misanthropic at times, and his adaptation of Manchette’s pulpy machinations made me want to know more about the author and his work. (A brief bio at the end of the book notes that Manchette, who died in 1995, wrote 10 crime novels, six of which have been adapted for film.) A most satisfying piece of work in just about every way. 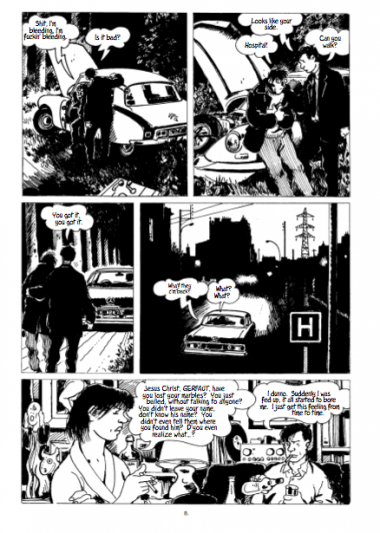 Also satisfying, but for very different reasons, is “Book One” of Johnny Ryan‘s Prison Pit. For those of you unfamiliar with Ryan’s work, you’re either very lucky or really missing out – it all depends on how much you enjoy vulgarity and political incorrectness bordering on insanity. I, for one, quite like it, especially in the hands of Ryan, whose Angry Youth Comics are basically just festering pustules, and deserve a place on every comics’ fans coffee table for just that reason.

Prison Pit, a vaguely sci-fi allegory in which bad masked dudes exile an even tougher bad masked dude onto a planet to try and survive, is Ryan’s first attempt at a longer form narrative, and it’s what fans would expect, and more–blood-spurting violence and ridiculously horrible images with no redeeming purpose other than to gross out readers. Or maybe that is its redeeming purpose. How the American cartoonist manages to keep upping the ante of “ugh!” is beyond this polite Canadian, but Prison Pit lives up to its format by allowing him to follow his ideas to the absurd conclusions. I’m not really sure if Prison Pit Book One is the best introduction to Ryan’s work, but it’s certainly capable of destroying relationships and causing job loss. 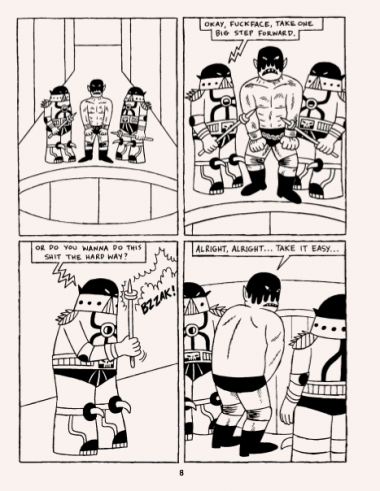 It’s probably fair to say that Ryan’s work is, in a way, a reaction to Love and Rockets, Fantagraphics’ flagship title. Between Jaime Hernandez’ too-beautiful, clean-cut Archie Comics-saluting art and brother Gilbert’s compassionate, sometimes maddeningly cute stories about the lives of the characters populating his fictional town of Palomar, there’s lots to provoke a Mad Magazine-gone-haywire sensibility like Ryan’s. Love and Rockets is the comic you give people who don’t read comics; Angry Youth Comics (and Prison Pit) is examples of the form you give people whom you don’t want to ever read comics again.

Love and Rockets no. 2, the most recent addition to the Hernandez Bros’ oeuvre, is the second volume in the new bookstore-friendly graphic novel format. The comic began as a black-and-white magazine and was, for a while, a regular-sized comic book. This new delivery system’s chief flaw is the time it takes for the artists to come up with enough new material to fill editions. I’d forgotten most of the first part of Jaime’s story about a couple of competing (and fighting) female superhero groups. Gilbert’s main contribution, the dream-like “Hypnotwist”, also left me confused, but more because I couldn’t decide if its logic and images were worth trying to interpret. 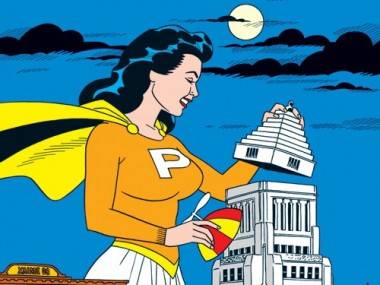 But spending time with Jaime’s art is never a bad thing, and though I didn’t always care about who was punching who, or why, in “Daughters of Doom” and “Mothers of Mercy”(chapters three and four of a longer story begun in Love and Rockets no. 1), his mastery of the female figure and obvious love of the grand myths of superhero comics kept me interested, if not always fully engaged. I supposed I’ll always read Love and Rockets, at least as long as the Bros.’ are producing it, out of habit and nostalgia, sure, but also because they do continue to surprise once in awhile. And we need them to give something for the Johnny Ryans of the world to rebel against.