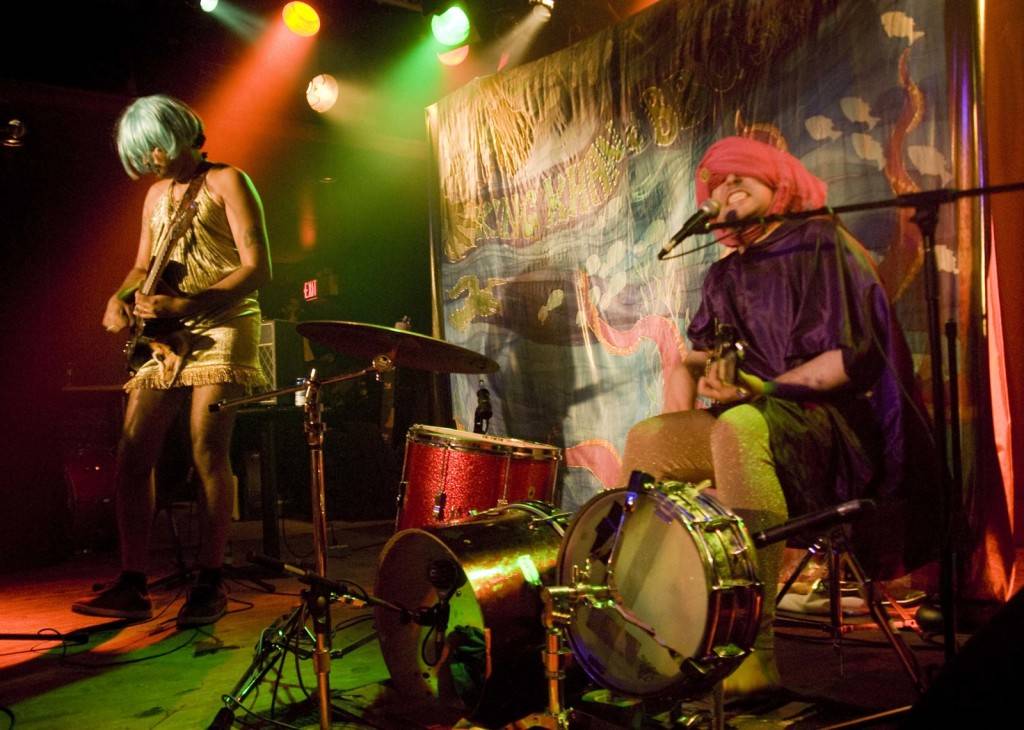 Review and photos – King Khan & BBQ Show with Those Darlins at the Red Room, Vancouver, Nov 23 2009

Flowered, lace and opaque tights paired with Converse chucks and cowboy boots trampled onto the stage of the Red Room. Those Darlins, a trio of rude-but-brilliant girls, started off what seemed like a calm, collected night; crowd members sat in a semi-circle around the stairs of the dance floor waiting for the evening to begin.

Within moments, Jessi Darlin on guitar, Kelley Darlin on bass and lead vocals, and Nikki Darlin on baritone ukulele tore the composed mood to shreds. “It’s our first day in Canada ever,” shouted Kelley to a rowdy crowd, ready and willing to dance the night away with drinks in hand.

The group of small-town girls from of Murfreesboro, Tennessee knows how to rock, pop and two-step. Those Darlins’ sound: the Dixie Chicks gone wild meets Tegan and Sara, sprinkled with a classic country southern twang.

“Drank all that whiskey… headed for the open road,” sang Those Darlins, drawing in audience members already clapping and singing along to their catchy, country-rock songs about boys, booze and blues alongside Carter Family covers.

“Do you know what one tampon said to the other?” said Nikki Darlin, strumming away on her ukulele, clad in a cow print body suit. “Nothing, they were stuck up cunts.” The crowd howled with laughter at a joke quite fitting for the vulgar night ahead.

Towards the end of Those Darlins’ set, Jessi Darlin played her guitar right into the crowd, grabbing a fan’s Stella out of his hand, taking a mouthful and spitting it into the crowd as she slapped the beat of the song on her thigh. 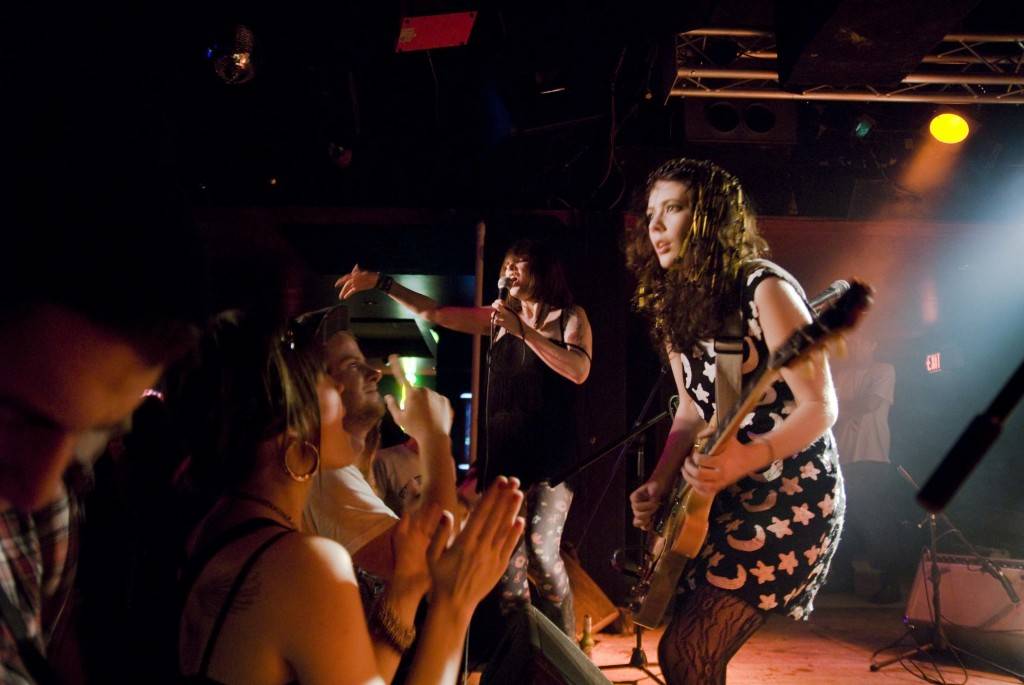 “Well, they were quite the ball of energy,” said a pleased member in the eclectic crowd of Vancouver’s plaid-wearing scenesters, snowboarders, punks and average Joes – most at the Red Room for weird, sensationalist garage-rock band, the King Khan & BBQ Show.

Around midnight the Montreal-Berlin duo casually wandered onto the stage, set with an underwater themed backdrop with their signature octopus branching across. King Khan was decked out in a blue wig, green halter dress complete with a gold-fringed bottom, a slit up the middle bearing his belly, and a furry cut out of a penis attached on the front.

BBQ, the singer/drummer/guitarist aka Mark Sultan, wore a pink turban adorned with a big pink gem, a pink sari cloak, sparkling pink tights and bare feet. The crowd went mad as they opened up with “Hold Me Tight”.

As King Khan shook his butt and flung his leg in the air jumping across the stage, there was full view of his tighty whities. BBQ’s turban was hanging over his eyes for the majority of the show as he growled into the mic.

“I don’t give a fuck, I don’t give a shit,” he sang as fans crawled onto the stage on their hands and knees, pounding their fists and bowing down in worship. After an hour the dance floor turned into a full on mosh pit, with crowd surfing and shoes and drinks flying across the sweaty room. Meanwhile, security was pushing the crowd back off the stage.

At this point I was sitting on stage up by the amps, ears pounding without earplugs, unable to really decipher lyrics, and thinking I could quite possibly become certifiably deaf tonight. The madhouse crowd is shoving our photographer up against the amps, knocking over a dozen drinks onto the stage.

“Can I get less drums, less guitar, and more vocals please,” asked King Khan. BBQ sat at his drum set for the entire show, drumming in bare feet, playing rhythm guitar, growling and singing all at the same time throughout.

“That was a dirty little song, but this one’s got taste,” said King Khan, winking and flashing his pearly white smile at all the pretty girls at the front of the stage. “Uh actually let’s get more vulgar, here we go,” he bellowed before he began singing “Taste Buds”, one of the crude tracks off their latest album, Invisible Girl.

“Taste buds on my cock, I’mma love you baby around the clock,” he sang. Considerably vulgar? Yes. Was the crowd phased? Not in the slightest.

Girls, and boys, spent the night rocking out facing each other and literally throwing themselves onto the stage at cross-dressed, chubby, East Indian men, one with his belly hanging out and the other with a sloppy turban, for a chaotic hour of garage-rock appropriately called “The King Khan and BBQ Show”.