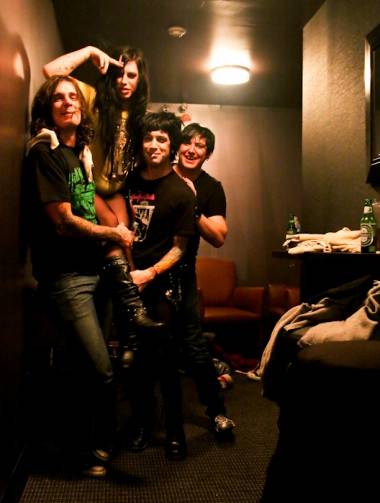 – by Shawn Conner/photos by Jessica Bardosh

Chrissie Hynde, Danny McBride, the members of Anvil – these people were born with rock ‘n’ roll in their veins. Others – Orville Redenbacher, Garrison Keillor, Canadian prime minister Stephen Harper – not so much.

With favourite album covers tattooed on her body and Sonic Youth song lyrics (!) memorized (!!) by the age of 11 (!!!), Die Mannequin’s Care Failure definitely falls into the former camp.

Born Caroline Kawa, Ms Failure has so far been an avid student and follower (if by accident) of the rock ‘n’ roll script: a tumultuous childhood, visits to rehab, tattoos and hair dye.

Her first band was called the Bloody Mannequins, and she recorded How to Kill, her first EP under the Die Mannequin name, in 2006, with some help from friends. By the time of the next EP, Slaughter Daughter, Failure had a bassist in Anthony “Useless” Bleed, a publishing contract (with EMI) and a distribution deal (with Warner) for the band’s own label, How to Die Records. Tours opening for Buckcherry, Guns N Roses (the Axl version), the Deftones, and Marilyn Manson have followed, as hasÂ The Rawside of Die Mannequin, a documentary by Canadian filmmaker Bruce McDonald.

The doc was included on early copies of Fino + Bleed, Die Mannequin‘s de facto debut released in September of this year. Unfortunately, Rawside is light on live footage, but on Fino + Bleed songs like “Miss Americunt”, “Caroline Mescaline” and “Candide” Failure emerges as one of the strongest female punk rock presences since Brody Dalle of the Distillers, and with the tunes to boot.

The Snipe reached Ms Failure in Toronto, a few days before she was scheduled to fly to Vancouver to get the press ball rolling and, on Nov 24, kick off Die Mannequin’s 2009 Canadian tour. 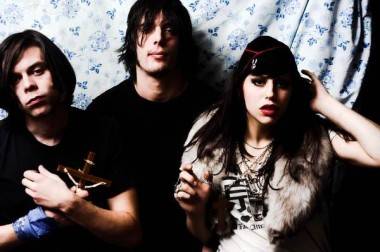 Shawn Conner: When you opened for Marilyn Manson, did he offer you guys any of his Mansinthe?

Care Failure: Uhm, no. I remember being in Halifax, you know the Liquor Dome? They have one dollar drinks, and I was like, you want to have some absinthe? I remember teaching the people how to do it up, that’s the junkie in me.

SC: It seems like this is very much your band. You remind me of Chrissie Hynde, she never wanted to be a singer/songwriter, she always wanted to be in a rock band.

CF: My dad always says that, that I remind him of Chrissie Hynde. But I was always the backup singer. The only reason I had to start the Bloody Mannequins, before Die Mannequin, was because I was co-writing with a guy but he would never record with me cos he lived in Scarborough which was across town so I’d have to record the songs myself. I’d always stand at the side too when we were a three-piece. But now, since the last tour with Manson, I added a guitarist [Stacy Stray], and I’m forced into the middle for the first time. Which is kind of weird for me.

SC: Is that the tour that led to the broken foot in Halifax?

CF: Yeah. Yeah, it’s still broken. My two toes are separated from my foot, so I guess it takes awhile.

SC: That sounds uncomfortable. I like having my digits attached to the rest of my foot.

CF: Do you? I guess I don’t, maybe. Maybe I just didn’t know I wanted it like that…

SC: I read that you earned every word on a Sonic Youth album, which is kind of funny in itself, never mind that you were 11 years old at the time.

CF: Yeah, along with every stupid note that went along with it. I’m a big sonic nerd.

CF: Yeah, especially since they’re an acquired taste. Patience was involved, the kind of patience that can only be handled by someone at that tender young age. 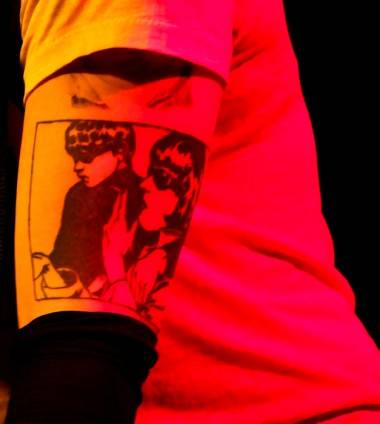 SC: Now do you use a lot of weird tunings because of that?

CF: I do use some really fucked-up turnings. The only songs I’ve written in standard tunings are “Miss Americunt” and “Caroline Mescaline”. I wrote them when I was 16. Ever since then it’s always E-G-C-Something, D-G-D, or this weird made-up one with like “screwdriver at fret 3,” etcetera.

SC: That looks good in music notation. You wrote those when you were 16? Were they complete?

CF: For the most part, they remained the same. That was one reason we all decided on those two, because they’re pretty done.

CF: Yeah. I’ve been trying to [pretentious tone] “learn my craft” and become more bulletproof and dangerous as a songwriter and become better. It would be shitty if I was getting worse, there would be something really wrong there.

SC: Yeah. Well they say most artists only have three or four really good records in them.

CF: They also say an artist or writer writes the same song and hook over and over again. I think sometimes it’s true, that I write the same kind of punk song over and over again, and also the same kind of ballad. I tried to branch out on this record. I guess, “Bad Medicine” would be the cornerstone for what I’m talking about. I wanted to learn to write different kinds of songs.

CF: I guess that’s what a smart person would do. It’s whatever purges and vomits out. When I first wrote “Bad Medicine” I was thinking of giving it to someone else, I was going to give it to my rapping girlfriend and just sing the chorus and have her rap through it. I remember thinking, “This’ll be a good one, maybe I’ll make some money with it.” I ended up liking it too much and kept it.

SC: Do you have plans for any more album-cover tattoos, or have there been any you wanted but for whatever reason haven’t had done?

CF: Led Zeppelin‘s Houses of the Holy, but it’s kind of verging on child porn. It’s funny ‘cos I’m trying to tell the story of my life through the album covers so it’s hard. I’ve got to love the record and love the art and then it has to tell a story. I started with the Melvins‘ Houdini cover and the two little kids, then the Dinosaur Jr. [Green Mind], with the 11-year-old pulling up her panties and smoking a cigarette and who thinks she knows everything, and then Goo [Sonic Youth], like, me and my boyfriend killed my parents and we take off. And now what do I do? I love the cover of [Nirvana‘s] Bleach, it’s really simple. It’s just like hair everywhere. I know it’s completely cheesy but I guess that would be the next stage of my life.

CF: He’s awesome. He was in the band for awhile. I needed a drummer for the record. He’s worked with Neil Young, with Pearl Jam in the beginning, he told me that I was the most meticulous artist he’d worked with. “Not in a bad way!” he said. I definitely know what I want. And he was such a nice guy. He just wants to play and likes good music.

After we were done I was emailing with him, and mentioned I was looking for a drummer. And he said let me make it perfectly clear, I love the songs and I’d love to play. So we went off to Germany and did some dates. He knew I needed to find someone locally because we were going off to L.A. and Malibu to practice and I live in Toronto. So he was there to support us until that. He was just so cool about the whole thing, not for more than anything but to play.

SC: And your drummer now is Daz…

CF: And we’ve just added a Stacy to play rhythm guitar, so we’re a two-guitar band, which we’ve never been before.

SC: Is it hard to find a guitar player who can play your songs the way you want them to be played?

CF: Yes! And my songs are not hard to play. I don’ t think I’m very good. What I’ve discovered is it’s not all technical. The hardest part about really being able to play guitar is getting rhythms and playing grooves. I get short-tempered and impatient with these guys, I watch them wail and wank and riff and shred, then I try get them to play the verse of “Bad Medicine” and they can’t keep it. “What, these are two chords, how can they not understand it?” I have to learn to be patient and understand people are creative in their own way. I don’t shred but I make up for it with creativity. It’s like the Kurt Cobain syndrome – you can have some sloppiness, but it’s actually really tidy sloppiness. 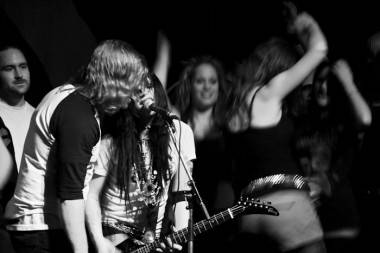