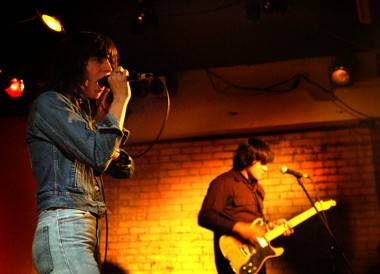 “Does that make sense?”

It’s a favourite query of Matthew Friedberger‘s, and it’s hard to not wonder if the musician is being just a little disengenuous. Sure, the guitarist/vocalist/keyboardist might ramble a bit, but it’s usually on-topic and on-point; a better question might be, “Are you still with me?”

And so it goes for the Fiery Furnaces, the band he co-manages with sister Eleanor. A few things can be said with certainty about the group, as a popular indie-rock entity: it’s prolific (seven records in seven years, plus a 40-minute EP and a live record); it’s quirky (let’s just say you know them when you hear them); and it’s conceptual (an album made with their grandmother on lead vocals; plans for “a silent album”).

The Friedbergers grew up in a Chicago suburb and formed the Fiery Furnaces in Brooklyn. The band was an immediate critical hit with its startling 2003 debut, Gallowsbird’s Park. 2004’s Blueberry Boat continued the critical upswing, but a 40-minute compilation entitled EP and Rehearsing My Choir, recorded with grandmother Olga Sarantos narrating stories of her life, mostly just confused people.

Bitter Tea in 2006 and the Thrill Jockey follow-up Widow City returned the band to the front of the indie record store racks. This year’s I’m Going Away, which features vocalist Eleanor writing the majority of the lyrics for the first time, is another record that defies easy categorization or summing up, but it’s full of ideas and lyrics and melodies that could only come from the Fiery Furnaces.

If that makes sense.

We talked to Matthew Friedberger in the midst of the group’s current tour, and following a day off for the group in Benton Harbor, Michigan. As it has been for the last four years, the Fiery Furnaces lineup includes bassist Jason Lowenstein (Sebadoh) and drummer Bob D’Amico providing the rhythmic backbone to the Friedbergers’ free-jazz Furnacing. 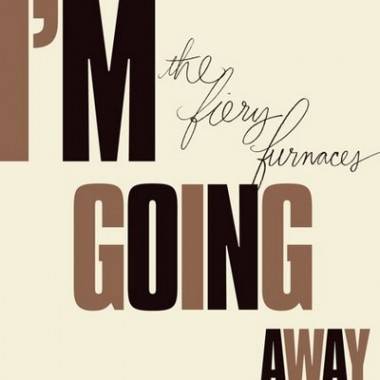 Shawn Conner: What did you do on your day off? Relax?

Matthew Friedberger: We have friends up here, they have a recording studio. So we recorded a couple of records. Nah, just kidding. We remixed songs for fun.

SC: It seems that you guys are always working, there’s always another Fiery Furnaces or related project on the go. Like you’re always moving forward.

MF: Well that’s the idea. It’s fun to play music and a privilege. You would do it as much as possible if it was your hobby, and if you’re lucky enough to do it as a job for a period of time than you get to work double the amount, ‘cos you’d still be doing it for fun anyway. I don’t know if that makes any sense…

SC: After awhile I would think it would be easy to take for granted.

SC: You’ve got this “silent” album lined up [sheet music, graphics, but no actual recording] as well as you and Eleanor covering Fiery Furnaces songs separately. What are some rejected ideas?

MF: I don’t know about rejected – just kind of “abandoned,” maybe. We were going to have a ballet, that never happened. There’s all sorts of story music ideas that we haven’t thought should be made the priority. But I don’t know if they’re rejected so much as suspended.

Oh, this was explicitly rejected by Eleanor.

You know how you make your normal records and you do your tour. But in addition to that, you have another record you make. You play four or five shows, in different places, and record this other record live. And you do that every year. So every year you put out two records, your normal studio record and the tour album. And Eleanor said, “That’s too much work.”

SC: Are you the workaholic in the band?

MF: I wouldn’t say “workaholic,” it makes it sound like I’m doing things that are unpleasant. It’s more, I’m the person who has to push forward with that kind of stuff. It’s fun to come up with things you might do, so I try to come up with them. I would never say, “Oh God, I don’t want to take on the extra work of writing a song.”

What do you mean, you don’t want to take on the extra work of writing a song? Of course you do. Even though making a record can be a lot of work, and going on tour can be like work in a certain way. Still, I can’t imagine, especially for making up music, “Oh, that’s too much work.”

SC: Was there a Fiery Furnaces record that was more work than the others?

MF: Yeah Bitter Tea. That was just one where every little detail was fussed over forever. By me, I mean. That’s what I wanted to do. Every arrangement was not standard and every sound was different. It doesn’t necessarily sound like that, but the way the songs were built up were different, none were standard rock arrangements, and there were all kinds of tricks.

Like live drums were made to sound like drum machines, pianos were made to sound like guitars, there was beat-boxing. Not necessarily the songwriting, but the record itself is very very elaborate. Hopefully it doesn’t sound that way, and in some ways sounds sort of breezy. That it sounds like there are a lot of arbitrary decisions on it. I mean that as a good thing. It was a lot of effort, but satisfying to do.

SC: What were you like as a kid? What did you channel your creativity into?

MF: No, I didn’t do any of that. I don’t think I have any creativity. It just comes from the activity itself. I don’t think of myself as a creative person. I like to do these activities, and I want to approach them and do them differently than what someone else has done. Not to think I’m special but because you owe it to the things you like to do something different. Otherwise you’re just casting a bad imitation on them. That’s how I would actually think about it.

But when I was a kid I wasn’t interested in writing stories or making up logos for bands. I liked music though, I played music. And I liked to play on whatever instrument was around. You just do your best to make it sound nice to you at the time. So I had a comfortable relationship with playing instruments, so that was lucky I guess.

SC: Were you and Eleanor always close, or has the band made you close?

MF: It was just the two of us and I think when we were a little bit older, at least we didn’t have too much interest in each other as friends. And then as adults we became friendly, and we tried to become friendly, because we’re siblings. It’s nice to be friends with your siblings.

And because of that friendship we started playing in the band, because a lot of the friendship was based on talking about rock music. Eleanor didn’t play music as a kid but as an adult wanted to play rock music. Then when she finally felt comfortable enough to perform in front of people, she recruited me to help her. But we never made stuff up together as children, ever. So it was something that happened as adults. I guess.

SC: I was checking out your website. You guys are crazy for health care! [According to the News section of the band’s website, “Fiery Furnaces shows in August re-branded as pro-health care reform rallies!”]

MF: The country is crazy when it comes to healthcare. Or has a crazy attitude towards health care.

SC: A bill just passed in the Senate…?

MF: In the House [of Representatives]. It’s huge. Even though the health care effort has been, for people on the left, very dispiriting, because it started off in a way that didn’t seem promising – the right wing seemed to have a lot of energy both in the media and their acolytes, and the cultural left was distracted or already disgruntled that nothing could get passed that was going to be progressive enough, and so August to September was very disappointing for people who want to see more social democracy.

I shouldn’t even say that term. More progressive working-family governance, put it that way. But the House bill has passed and it’s a huge step forward, even if it leaves the U.S. still far behind the civilized world, “civilized” in quotation marks.

SC: Are you the type of person who, if you encounter a differing opinion, will try to reason or debate with that person?

MF: People don’t like to have their minds changed as such, because that involves a loss of face often. If you’re actually trying to persuade someone to think differently, you have to be indirect. Of course, if you want to just argue with someone, well that’s can be fun and gratifying, but you’re probably not going to persuade them.

It’s hard to convince people something might be good for them or their communities when people have a cultural identity which is formed by rejection of what you’re talking about. If you have a conception of what it means to be an American, and one of those things is that we don’t have any national health service, the argument is already short-circuited.

It’s surprising to be reminded of that. Of course, there are historical reasons. People still want to have this perverted version of the Jeffersonian ideal where you have yourÂ  own little plot of land, your castle – it’s a very strange libertarianism that’s important to a lot of people. And it’s very obsolete. The country hasn’t been like that since – ever.

SC: I’m looking forward to seeing you guys again when you come up here. The whole bill looks really interesting, with Cryptacize and Dent May.

MF: It’s great to play with Cryptacize, they’re a great band. I hope they wouldn’t mind my saying this, it’s very California, and sunny in a certain way, on the surface of it least. It’s a real privilege. And Dent May, he’s been sick, so he hasn’t joined the tour yet. So we haven’t seen him.