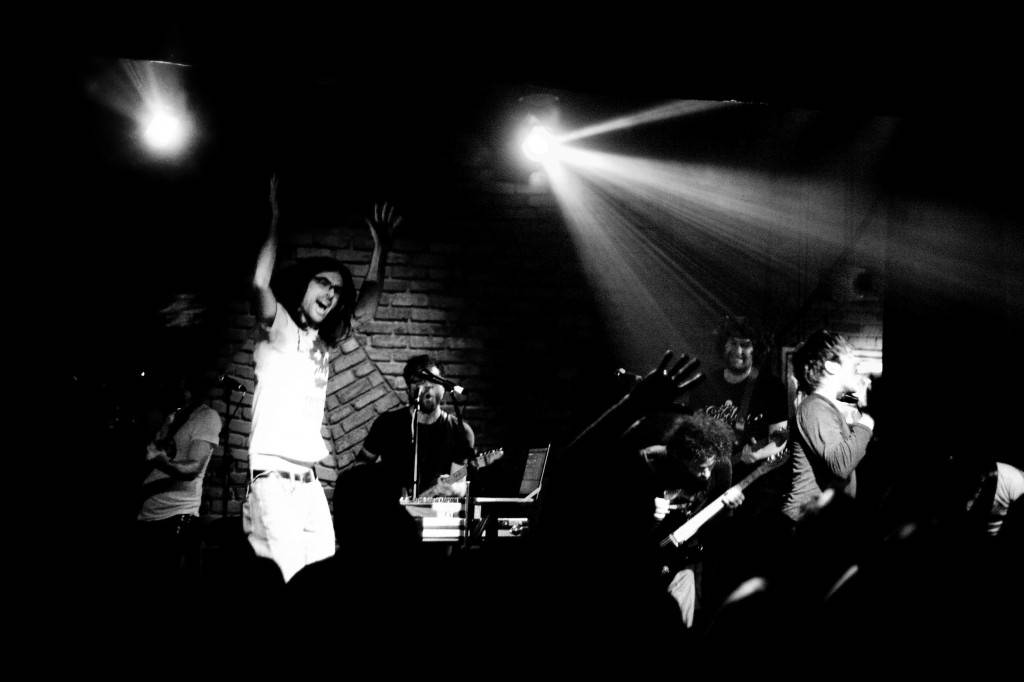 Maxime Morin, aka DJ Champion, is a Montreal-based electronic musician. After a decade in the clubs Morin released his first album of original music, Chill’em all, in 2004.

After multiple tours in support for Chill’em all, a success at home in Canada, as well as the release of remix and live albums, Morin finally headed back into the studio to record a follow-up. Resistance is a heavier and harder take on the DJ grooves of Champion’s debut, and with a male singer, Pilou Cote, on lead vocals. We reached Morin just as he was about to begin a cross-Canada tour in support of Resistance, with the first show in Vancouver.

Shawn Conner: Is there anything you like to do when you’re in Vancouver?

SC: Are you a nature lover, or is that as close to nature as you like to get it?

MM: [laughs] No, I was born in the countryside. We did it the last time we went to Vancouver, after a full tour in the Prairies. When we got in Vancouver the first ting we needed to do was see trees and the ocean. I think it’s important to do that once in a while, to get connected with the real thing. And of course, Vancouver has that to offer. We have to do it before we go on tour or in the middle or after, to make sure we stay as close to real as we can. But with tomorrow night, we have a few friends in Vancouver, so we’ll go go for dinner. Not too  much of a party but a little.

SC: Well you’ll save the party energy for your show here the next night.

MM: Yes, it’s important, don’t spoil the energy before. I take great responsibility with the fact that, okay, the people are coming to the venues, they’re paying, I don’t know what it’s going to be, $25, for some people that’s a lot of money, plus your beer, plus your whatever-you-need, so I want to give them a good time. But sometimes I go a little too far. I get anxious, is everything going to be right, is the sound good, please don’t drink before the event, I have to calm down a bit, relax, it’s okay.

SC: Is there anything you do to get calm before a show, like meditate?

MM: Well I don’t drink and I don’t take drugs, just being with the guys and joking. And also before the concert, most of the time, 30 minutes before the show, I go into the crowd and just hang around and say ‘hi’ to people and get in touch, get connected with who I’m going to play for.

SC: So is this the same lineup as for the Chill’em all tours?

MM: No. Our bass player Manon [Chaput], she decided to focus on her own music, so she’s stopped touring. We’ve replaced her with a guy, which is Louis [Lalancette]. And Betty, our lead singer, she went on to her own project Beast. So now we have a singer, the guy’s called Pilou. It’s a boys’ band, now, just like in California, where you have all boys bands. 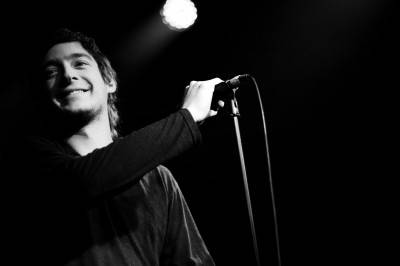 SC: Is the energy different?

MM: Yeah, the energy onstage is a little bit more rock. But also, the music, the album itself is more rock. So it’s interesting, the change is interesting. But I’m very comfortable with it.

SC: So did you really scrap an entire album after Chill’em all?

MM: It was just early stages. Only two songs had lyrics. And there were some good tracks. But we’d been on tour for almost four years, that’s a lot without composing music. So when I started recording for Resistance, I was still too much in the energy of Chill’em all, of the tour. The music I had was just the B-side of Chill’em all. I play music and I wish to evolve with it.

Evolution is never easy and it always hurts. So I had to put myself at risk, and take chances and question myself. I didn’t do that the first four months. But then I just decided to trash everything and start all over again, while keeping in mind there was some good in Chill’em all, that’s why it’s the same mechanics – 808 drum machines with guitar, that’s the core, that doesn’t change, even thought he songs are more rock, the guitar tones are much more crunchy and the structures are more lyrics-oriented so more rock.

SC: Apparently, to record Resistance you adopted “a secluded lifestyle.” What does that mean? You turn off your phone, or you move to the countryside…?

MM: I wanted to moved to the countryside, but the record business is going down the hill, so I didn’t have enough money to rent a cottage in the country. So I built a studio in my loft, put all the equipment in there, a place where nobody can hear me and I don’t hear anyone either. That was the first step. But I also stopped going out.

When you’re on tour, you’re always out, you’re always in a venue in a bar, you’re being DJ Champion all the time, your ego talks a lot, and you have to stop that. Ego is a power-tripper, and it won’t go for losing anything. And that doesn’t compose good music, only shitty commercial crap. I like pop music and there’s good pop music, but there’s also bad. It’s not even pop music, it’s just commercial music, and ego does it well. But human beings, no.

And that’s why I scrapped the first session and tried to start from scratch, trying different things, things I’d never done, and even trying to feel shame, composing shitty tracks, ridiculous stuff I wouldn’t be proud of, just to feel that I’m alive. And you know, sometimes it [the experimentation] is very, not drastic, but composing a song like “Alive Again” [the single], some people have said, “Well, that’s not experimental music, that’s a pop song.” Yes, but I’ve never done it before, so for me it’s experimenting. That’s doing stuff that you’ve never done before. And there I go, evolution!

SC: I’m not that plugged into DJ culture, but it seems that the role of the DJ is changing, that more DJs are embracing the performance aspect. I’m thinking of Greg Gillis [Girl Talk], Dan Deacon—

MM: Dan Deacon! The man! I’m a total fan. I discovered him at South By Southwest, in  Austin. You know, when we went there we thought we’re going to cowboy country, it’s going to be full of rednecks, and be prepared to meet some bad people. But we got there, and wow, what a great city full of nice people. We went to this party just outside the downtown area, and it was full of cool people, students, gay guys, you name it they were all there, there were no rednecks there, that’s cool. But that party dies and we went to a train station, and people just went there, plugged in a p.a. and started partying. And we thought Wow that’s spontaneous, that’s wonderful, that’s great. Then this guy came on, Dan Deacon, the animal! And we just got blown away. He’s the top shit man, he’s an extraordinary form of life. It was a super-beautiful night. We were only there for one night, so we told ourselves, okay, let’s not sleep and discover the city.

But to answer your question: since I got into electronic music, I’ve seen it evolve into two sides, the traditional DJing and the live DJing with the laptop. In the beginning we didn’t have the laptops, now it’s with the laptops and  the controllers and all that stuff. Dan Deacon also doesn’t use a laptop. And the Herbalizer band has many musicians onstage. Most of the time, not to say I’m the top shit, I’ve seen musicians with DJs it wasn’t a great mix. It was too much oriented on the free improv, or too organized, like why have a DJ, just have a drummer and that’s it. Most of them I’ve seen the DJ thing didn’t add anything more, or the musicians were just an obstacle. The way I do things [laughs], because I’m Champion, you know!–no, but I don’t like to play that competition crap, it’s just giving food to your ego, and that’s not good–what we’re doing, we’re improvising structures. The guitarists know what they’re going to play, they don’t know when, how, it’s up to me with the sign language. I think that’s the difference with other DJs or rock bands. 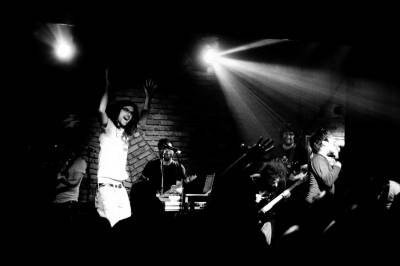 SC: It seems like when you mix the two, live musicians and DJing, there’s a lot of room for different kinds of stage set-ups. I saw Skinny Puppy a few nights ago and it was one guy singing, another playing drums, another doing all the rest.

SC: So what do you play?

MM: I have the laptop and the DJ mixer, but the only sound that comes out of me is the drums, no guitars, no melodies, no singing, no nothing. And the songs aren’t preprogrammed, it’s only about muting and un-muting. Everything is loop-based. But there’s also, like you said, Skinny Puppy, or there’s a girl in Vancouver, Piper Davis–

MM: She came very close to singing for Champion. I went ot Vancouver, I met her, she’s a really nice girl, super-nice voice, a good performer. She’s really good, and the way she does her thing, it’s electronic music, but from what I’ve seen it’s not a DJ mix, mixing one song into another. She plays songs, and that’s great. The technicality of it, at the end of the day, we don’t give a damn. She’s there, she’s onstage, she sings beautifully.

SC: So what happened with that collaboration?

MM: On my way back to Montreal I met Pilou, the singer for this Resistance album. I thought going with Piper would have been trying to replace Betty, where as going with Pilou was like, fuck it all. I just decided to take the risk. But if not it would’ve been Piper. At the same time, when I saw she’s releasing some stuff and going on with her project, I’m probably more happy with this than her singing with me.

The same thing with Betty, of course I would’ve prepared if she stayed in the band, but now she’s doing her own thing and that’s important for her own evolution. And the same thing for Piper. I would never have given her that liberty in the band, because it’s my band. If I want to be generous with it, I have to stay in control with it. Otherwise I’ll be frustrated. If it’s not clear the leader is the leader, there are too many chiefs, not enough Indians, you head for disaster.