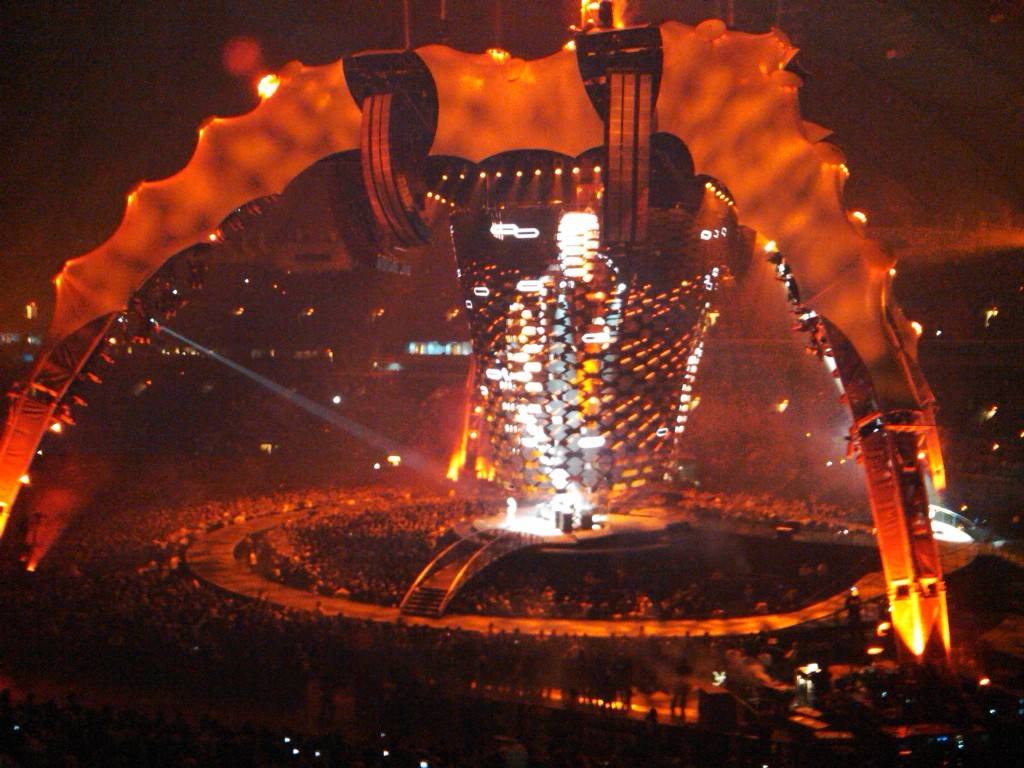 You know, Bono, no line – as in No Line on the Horizon.Â  Only the second song (“Get On Your Boots”) in, and it’s typical Bono: doing it and overdoing it. What next? Maybe he’ll read the transit schedule as a way of showing off his local knowledge. Sometimes I’d like to get on my boots and boot him in the ass.

And other times, maybe not. Say what you want about Bono being a pompous do-gooder–he connects with the audience. Plus, his questions did connect with the space-travel theme. This was a night that began with the hypnotic chords of David Bowie‘s “Space Oddity” (the entire song played full volume before U2 took the stage) and ended with Elton John‘s “Rocket Man” after the encore.

What happened in-between kept the sold-out crowd of over 50,000 at BC Place Stadium entertained. Musically, there were classic crowd-pleasers:Â  “The Unforgettable Fire”, “Sunday Bloody Sunday”… and when the Edge laid into the razor-sharp riffs of “Vertigo”, the stadium erupted.

However, even the biggest U2 fan would have to admit the song selection lacked balance. A full seven songs were from their latest album No LineÂ On the Horizon -Â almost a third of the setlist. It’d be different if these were truly great songs. Even the designated singles (“Get On Your Boots”, “Magnificent”, and the amusing “I’ll Go Crazy If I Don’t Go Crazy Tonight”) aren’t bona fide hits. Bono once said nothing is easier than writing a mediocre song. Here’s your proof and plenty of it.

U2 tours always overhype production and visuals. What’s the big deal this time around? A giant lemon again? Naw…Â  it’s “the Claw”!

Also known as the “spaceship on four legs”, it was especially effective for the amazing encore. A much-larger-than-life Archbishop Desmond Tutu spoke of aid to Africa and the ONE campaign. Then U2 played their one truly great song, “One”.Â  The Edge, Adam Clayton, Larry Mullen Jr., and Bono all seemed genuinely inspired.

Then, foreshadowing “Ultraviolet (Light My Way)”, a robotic voice emanated from the giant screen. W.H. Auden‘s poem “Stop all the clocks…” (also known as “Funeral Blues”) gradually became recognizable as brilliant multi-coloured lights highlighted each syllable.Â  “The stars are not wanted now: put out every one/Pack up the moon and dismantle the sun.” Absolute magic.

“Thank you to everyone who helped us build this madness.” The members of U2 took their bows, hugged, and then slowly made their exit. The applause died down, and “the Claw” became a uniform yellow, like a giant porch light.Â  Shadowy figures of giant bugs gradually settled on it, as people slowly, and reluctantly, began to leave.