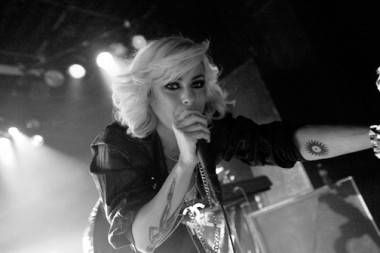 Review and photos – The Sounds at the Commodore, Vancouver Oct. 26 2009

A boisterous Monday night saw hundreds of excited fans seek refuge in the Commodore, anxiously awaiting an electro-rock onslaught. The magnetically charged venue was filled with colorful sequins, stripes, and plaid, as if the audience was some vibrant combination of ’70s glam meets Mark’s Work Wearhouse.

Following a shenanigan-filled, Woody Allen-esque performance by opener Foxy Shazam, the male aspect of the headliner sauntered to their respective positions. Bathed in blue light the feverish crowd (reviewer included) stood on tippy-toes anticipating one of Sweden’s hottest exports.

Bouncing on stage with an undeniable stage presence, The Sounds‘ lead singer Maja Ivarsson is a sight to behold. Clad in skin-tight leather, the blonde firecracker emits raw sex appeal that demands your attention; unapologetic and ferocious, she gets what she wants.

Opening with “Queen of Apology”, Ivarsson aggressively cooed an amazing performance highlighted by the heartbreaking “Night after Night”. Leading the crowd with raw vocals that pulled and prodded at every available emotion, the dynamic songstress was a vision on stage, a 21st-century Debbie Harry.

“Get up and dance motherfuckers,” ordered Ivarsson in a militant yet coy fashion, and that we did as the rest of the set became an arm-pumping, heart stomping blur. Foreheads beaded with sweat, the smell of hairspray and joy lingering in the air, the crowd left grinning from ear to ear. We came for a rock show but left with our minds blown.

One response to “The Sounds at the Commodore Ballroom”