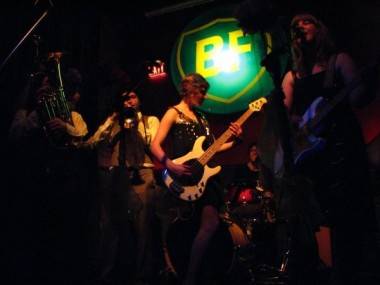 The Secretaries from Edmonton at the Black Frog, Vancouver, Oct 21 2009. Rachel Fox photo

The Secretaries at the Black Frog, Vancouver, Oct 21 2009

A cursory look at the Secretaries’ MySpace page was enough to inform me that I was, without question, going to like these ladies. My interest was piqued by their inclusion of “’70s Heart, feathers, and tequila” among their list of influences – things that I, too, consider influential.

Sensing that there were “kindred spirits” (the kind to which Anne Shirley, aka Anne of Green Gables, kept alluding) in my midst, I sat down alone at a table with notebook in hand, feeling somewhat self-conscious. In a lame attempt at maintaining some level of even-handed music journalism ethics, I kept thinking of William Miller’s declaration in Almost Famous, “I am the enemy!”

Except that I’m not, because I liked them right away. These are the kind of cool, fun, smart girls I wish I knew more of in high school. (Alas, it was just me.) If I was in a band: I, too, would dress up for a show; I, too, would wear chic-yet-sensible Mary Janes with heels; I, too, would wear feathers in my hair (which, as it happens, that night I did); I, too would adorn my microphone stand with pretty flowers and gold tulle (Stevie Nicks would approve); And I, too, would make the boys in my band dress in suits and wear felt dress hats (in a cool, rather than ironic, way). 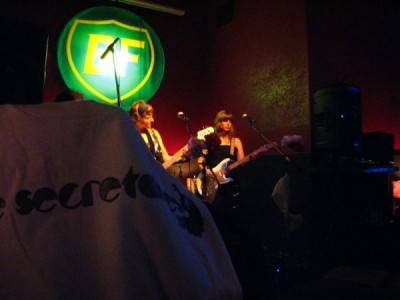 The Secretaries (Colleen Brown, Amy van Keeken) hail from Edmonton and are currently touring with their new, self-titled album. Van Keekan fills me in on the recent line-up changes and that the boys in the band are actually the Brassholes, a horn-y trio (Steve Hutchison, Darren Radbourne, Greg Hutchinson) who all have day jobs that have nothing to do with secretarial work.Â  (“I am a receptionist, which is kind of funny, but not an actual secretary,” van Keekan informs me.)

We talk a little about the aesthetics of the band and how she and Brown wanted to incorporate dressing up as part of their onstage persona. My big question had to do with whether or not the girls had to make the boys dress up, too – alas, I am mistaken, because rather than having to crack the whip at the Brassholes, they don the suits and hats willingly. I’m impressed, although it probably doesn’t hurt that van Keekan’s boyfriend is a practicing Brasshole.

“Does this make you the Mick Fleetwood of the Secretaries?” I ask. Van Keekan takes a moment and responds in the affirmative, before adding something about the “power of boobs.” I could not agree more, and suggest this be co-opted as the title for their next album.

It’s too bad that there wasn’t a bigger crowd at the show that night, because the Secretaries were on fire. Unfortunately, they couldn’t compete with Yo La Tengo playing the Commodore, which is where Vancouver’s hipster elite flocked. (I’m not hip enough for Yo La Tengo, who along with Death Cab for Cutie and Belle & Sebastian exist in an impenetrable vortex of indie-alt-pop-cool I can only ever hope to appreciate. Until then, I will tap on that glass from the outside, wondering what it’s like “in there.”)

Van Keekan started the show by pumping the crowd and asking whether or not we “want to hear some rock and roll tonight?” The band proceeded to, indeed, rock and roll for two raucous sets. The ’70s-era Heart influence was distinctly audible on the lush, dreamy, layered-guitar-sound of “Makin’ Me Pay”, though the Secretaries come off as jauntier, poppier, and somewhat less aggressive than the Wilson sisters (thanks to the magical levity a horn section can provide). On “Tattoo” the ladies’ guitars were really tight; van Keekan and Brown’s voices harmonized beautifully, sounding great in spite of the Frog’s questionable acoustics.

The Secretaries engaged with each other and the crowd between songs, adding to the overall sense of fun which was only amplified when they did a group shot of tequila. If there was any doubt about the depth of my girly crush by the time they pulled out a cover of Fleetwood Mac’s “Don’t Stop” (said van Keekan, “we have a bright future playing weddings”), it was utterly cemented when I heard the opening bassline of Hall & Oates “I Can’t Go For That”.

If it means anything, I found myself dancing and singing along on the floor In spite of my deep-seeded pathological fear of dying in a crowd at a concert. 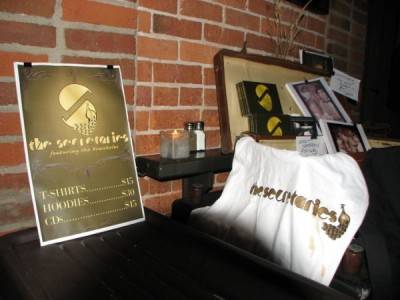