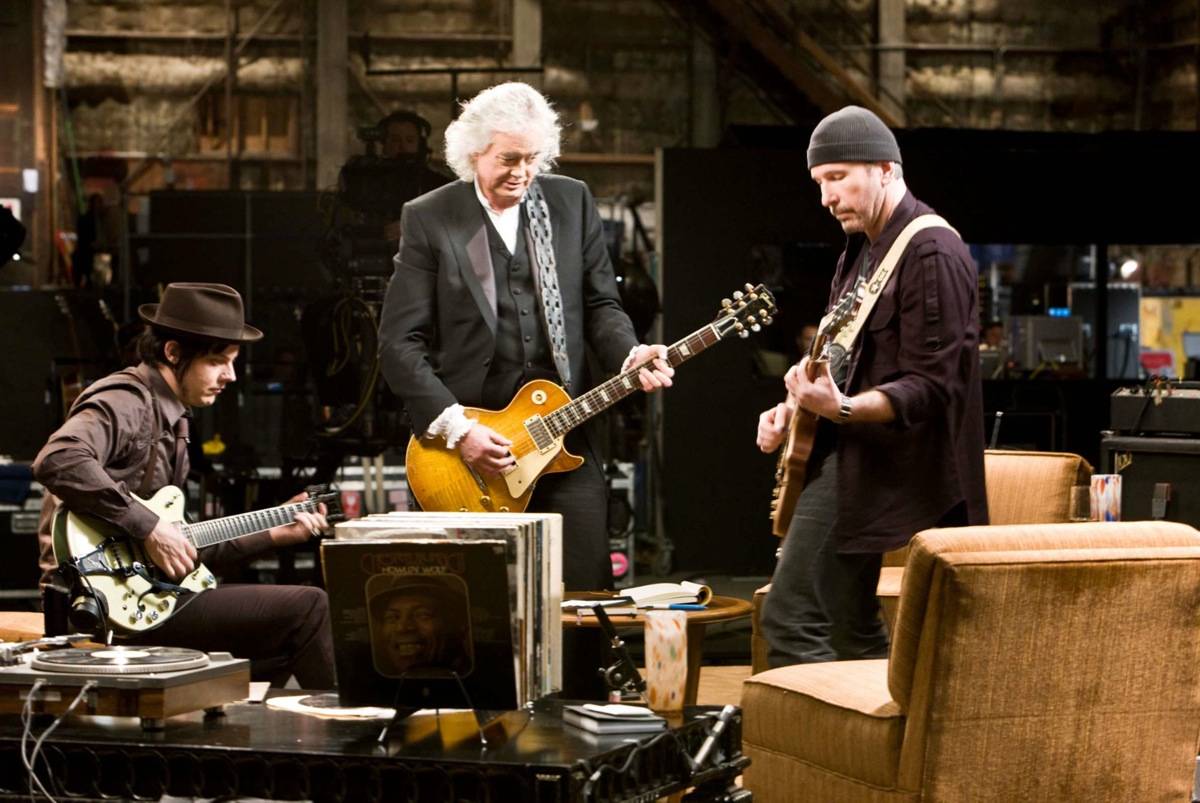 Jack White, Jimmy Page, the Edge in It Might Get Loud.

I remember watching a U2 concert on TV, not long after the album October was released. My friend, a guitar player who didn’t know the band, was blown away when The Edge did a one-note guitar solo. He couldn’t decide if it was brilliant or terrible, though he knew it was at least ballsy.

This came to mind during It Might Get Loud, a light but enjoyable hymn to the electric guitar featuring The Edge, Jack White, and Jimmy Page. The film is broadly built around a “summit” meeting between the three men, and ends on a scrappy jam through “The Weight”, but protracted sections take them back to significant locations in their past.

The Edge visits his old school, where a note on the message board from future U2 drummer Larry Mullen sealed everybody’s future. We also see The Edge on a deserted beach somewhere near Dublin, his huge effects rig planted in a sand dune. It looks totally ludicrous, but apparently he spends a lot of time there, enjoying the delay and echo from distant islands.

Which is where It Might Get Loud is most interesting. The oddly regal Page is a middle-class swot at heart, all historic Do What Thou Wilt-ing aside. In old TV footage of the 14-year-old James Page, he tells the interviewer he expects to get into “biological research” when he grows up. As a youthful session musician, he’s overcome with contempt for the “muzak” he’s hired to play. The Yardbirds offer an escape route, where he can “try anything”. Page’s lifelong battle is with the classicism foisted on him in London’s sound studios in the early ’60s. He becomes a kid again during a scene in which he listens to a 45 of Link Wray’s epically badass “Rumble”, waxing on about its “profound attitude” and beaming all over his face.

The Edge comes off as a sensitive creature molded by post-punk experimentalism and the economic blight and violence of Dublin in the ’70s. I’m no fan of U2 – although the early version of the teenage band we see performing a song called “Street Mission” looks and sounds pretty great – but the Edge is a thoughtful witness to his own deconstruction of the instrument. He talks solemnly about finding ways to remove notes from certain chords, and then mutating the shit out of everything electronically, having felt for his whole life that he was witnessing the “death of the guitar”. When he tries to teach “I Will Follow” to his co-stars, Page squints in confusion and asks, “Are you sure about that C?” The movie This is Spinal Tap didn’t make him laugh, he says. “I wept.”

White is perhaps the most interesting of all of them, being that he’s the youngest and the one who’s still engaged in writing his own myth. He’s accompanied by a nine-year-old version of himself in the early scenes, when he lays out a philosophy diametrically the opposite of that of the Edge. White’s mojo is old – technology leaves him cold, and “ease is a disease,” he says. His life was changed when he heard Son House singing “Grinning In Your Face”, a song bereft of everything except Son’s voice, handclaps, and “attitude”. It’s his Rosetta Stone, and the entire logic behind the White Stripes. Seeing the Flat Duo Jets was another key moment.

“I had to reassess what backwards meant in my life,” says White, who plays drums in his latest band is the Dead Weather. But White’s cutest story – of having no bed in his family home because his room was filled with instruments and recording equipment – is also the one that he essentially shares with both Page and the Edge. Jimmy was prone to carrying his guitar around at school, until it was confiscated from him. And the Edge built an electric guitar when he was 14.

As players, they couldn’t be much more different from each other. But as grown men whose lives are still governed by an obsessive teenage lust for music, they’re all exactly the same.