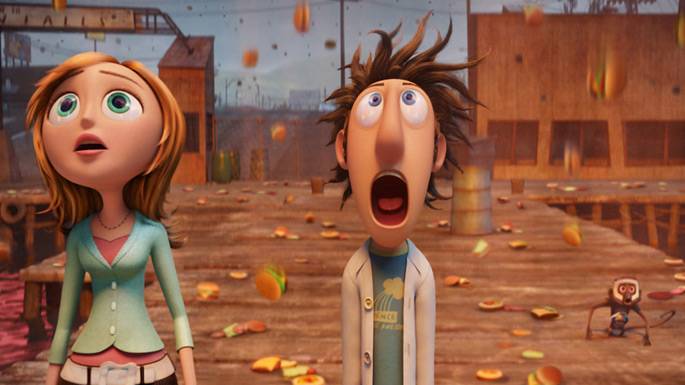 Movie review – Cloudy With a Chance of Meatballs

Hollywood is the frontline in a psycho-political battle for your child’s mind. I was explaining this to my four-year-old daughter as we watched Cloudy with a Chance of Meatballs last weekend, up until some guy sitting behind us in the theatre asked me to, and I quote, “keep your lousy BS to yourself, you moron.”

“Oh, really?” I asked, pointing at the enormous 3D spaghetti twister bearing down on our heads, “And I suppose you DON’T want your children to know that they’re being conditioned for an immediate future of severe food shortages, worldwide resource wars and the last-ditch failure of weather modification technology to forestall the certain collapse of civilization, right? What kind of parent are you???”

Well, needless to say, I would have elaborated further if my daughter hadn’t started crying like a little bitch or the guy hadn’t called me a “lunatic” and sucker-punched me in the back of the head. Which only proves my other theory that movies make people violent.

Anna Faris and Bill Hader are the fine leads in this goofy fantasia of criss-crossing apocalyptic themes, which, if you’re keeping score, is much funnier than Monsters Vs. Aliens (but just as soulless). Hader is joined by SNL-mates Will Forte and Andy Samberg. SNL traditionally is an important plank in the Empire’s stabilization efforts, where political liabilities are defused by tepid satire, if that’s even the word for it (ie. Tina Fey as Sarah Palin and ongoing jokes about torture). Incredibly, Cloudy With a Chance of Meatballs‘ funniest character –  a South American cameraman-doctor-pilot who might have been a death squad “electrician” for all we know – is voiced by Benjamin Bratt.

My antipathy towards the former Law and Order dude was sealed a long time ago when I saw him on Entertainment Tonight, where he sternly told viewers that Julia Roberts would never do a nude scene in a movie. Sorry for the digression, but there was something about the way he said it that just pissed me off. Anyway, I don’t know what he did with his career after that, a decade passed, and now he’s hilarious in Cloudy with a Chance of Meatballs.

Two years ago, Surf’s Up attempted to inoculate us to the coming reality of beachfront penguins, and Cloudy is a related effort at re-wiring climate change anxieties into entertainment. Ultimately, it’s considerably less offensive than this year’s blue ribbon champ in juvenile psy-war, G-Force, a film that argues in favour of National Security State gerbils operating advanced black-op weaponry. Just in time for the goon squad to roll out some more of its experimental psychotronic “non-lethal” arsenal at the G-20 summit, I might add.