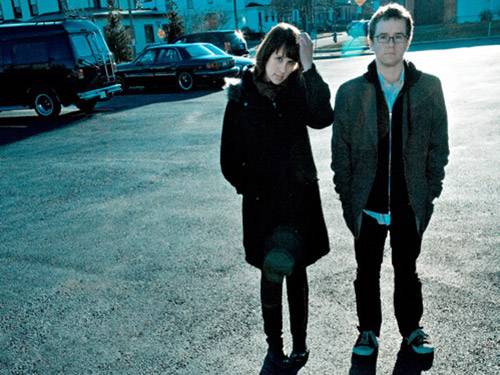 The songs on The Knot, Wye Oak‘s second album, seem simple enough. As drummer Andy Stack says, most originated on acoustic guitar; probably if it wasn’t for the layers of singer Jenn Wasner‘s electric guitar and Stack’s crashing drums, the tunes might come across as straightforward country or folk. But as recorded by the duo, the songs have a pounding, heavy beauty, like something by Low or, reaching further back, Codeine.

When reached in in a suburb of Baltimore, their hometown, Wasner and Stack were on their way to the shopping mall to get their iPod fixed. In the larger picture, the two are in the midst of putting together a band to play Stack’s brother’s upcoming wedding before Wye Oak heads out on tour again, in support of The Knot…

Andy Stack: We’re in the thick of wedding prep right now. Jenn and I have been spearheading the wedding band. There’s the two of us plus five or six of our really good friends, who are also really close to my brother. We’ve been learning all these awesome wedding songs, classic songs from our childhood. We’ve got this big band full of people who can really dig into the arrangements, which is definitely novel for us. We usually figure out how to strip a song down to is its essence. Now we have this eight-person band we’ve been rehearsing. We get to indulge ourselves.

Shawn Conner: So is this like a Baltimore supergroup?

AS: Something like that. It’s a lot of people who are pretty active around town in various different groups. It’s definitely a one-time only thing.

SC: So what’s on the song list? Probably nothing from The Knot…

AS: No, that would pretty much depress the wedding party. I don’t know, there’s been a lot of brainstorming. My brother and I grew up in a very musical household. There were all kinds of songs from our childhood we wanted to include; like some Talking Heads, my dad listened to a lot of. Steely Dan, which is so fuckin’ awesome, getting a band together to play Steely Dan songs. “Something” by George Harrison.

AS: It’s actually a secret for the wedding. But I guess I can tell you: “Haitian Divorce”.

SC: Really? How do you get that weird sound they have in the original?

AS: We have a friend who plays guitar whose doing it really well with his wah pedal. But I think the original recording uses a talkbox, something like Peter Frampton would use. But those things are not easy to come by. He’s an incredible lead guitar player and he’s pretty much nailed the style, whoever it was – Jeff “Skunk” Baxter.

SC: Isn’t he like a defense consultant for the government or something?

AS: Yeah, a bomb defuser, or a hostage negotiator. Something like that.

SC: I was looking for some covers by you guys on iTunes but couldn’t find anything.

AS: Well, Jenn and I used to play in this band that was kind of a honkytonk country band and I played a lot of upright bass and Jenn would come in and sing Patsy Cline songs, Gram Parsons and Emmylou Harris duets. Probably 70 per cent of what the band played was covers. Woody Guthrie, Dylan. I guess Wye Oak hasn’t done a lot of that stuff.

When Jenn and I started out playing we used to do a lot of bar gigs. The songs we would play were often covers because we would have a three-hour time slot to fill. At this point, we don’t do a whole lot of covers. But if you go to splicetoday.com, they did a compilation of American traditional songs, really old public domain songs, and we did “Black is the Colour of My True Love’s Hair”. We’re not against that kind of stuff. I guess we just haven’t done a lot of it under the Wye Oak name.

SC: Maybe some of those songs, if they were the darker country tunes, worked their way into Wye Oak?

AS: Yeah. I mean I think that makes sense, I don’t know how often I would have thought of it that way. A lot of the stuff we’re into thematically is some of that old dark country stuff, people dealing with their demons and that kind of stuff. I wouldn’t say it’s a direct correlation. Jenn likes to talk a lot how our songs are folk or country songs and hope they stand on their own despite whatever noise we layer on top of it. Most every song we have has been written on an acoustic guitar. Everything else comes not necessarily as an afterthought, but. we try and let the songs go naturally where they want to go.

SC: The first three songs on The Knot, the way they build from the brief, slow “Milk and Honey” to the slightly longer “For Prayer”, and both seem to build on each other until you get to the massive “Take It In” – it seems like those three would be great to play together.

AS: Yeah, actually. That’s exactly how we’ve been playing the last few shows, the first six songs on the album straight off. The first record we recorded, after the recording we kind of figured out a lot of songs live. That was the case for some of the songs for The Knot. Mostly we had live working arrangements, and we were excited about having this record where we can actually play everything live. The title The Knot is largely about the continuity of the record. We’re excited about being able to play a song set. The variation comes in that when we play them live, the arrangements are significantly different than on the record. Uh, I’m going to have to hand you over to Jenn–

SC: I just have one more question.

SC: You’re from Baltimore. You must have a John Waters story.

AS: Well, there are plenty to be had. I personally have never really talked to him. But I guess he’s an acquaintance of some of my friends. He lives a neighbourhood over and we always see him in the supermarket. My family is very involved in the film community, my father is a gaffer, he does lighting, and he’s been in the John Waters camp from way back. He did all the lighting for Pink Flamingos. He always tells a story about filming that last scene. They were setting up the shot and he was asking, “So how are we going to frame this, the dog takes a shit and then we cut the shot and put the fake stuff there?” And John Waters says, “What are you talking about? Divine is really going to eat the shit.” He always talks about witnessing that.

SC: God, I wish I had parents who were in the film business and had a story like that.