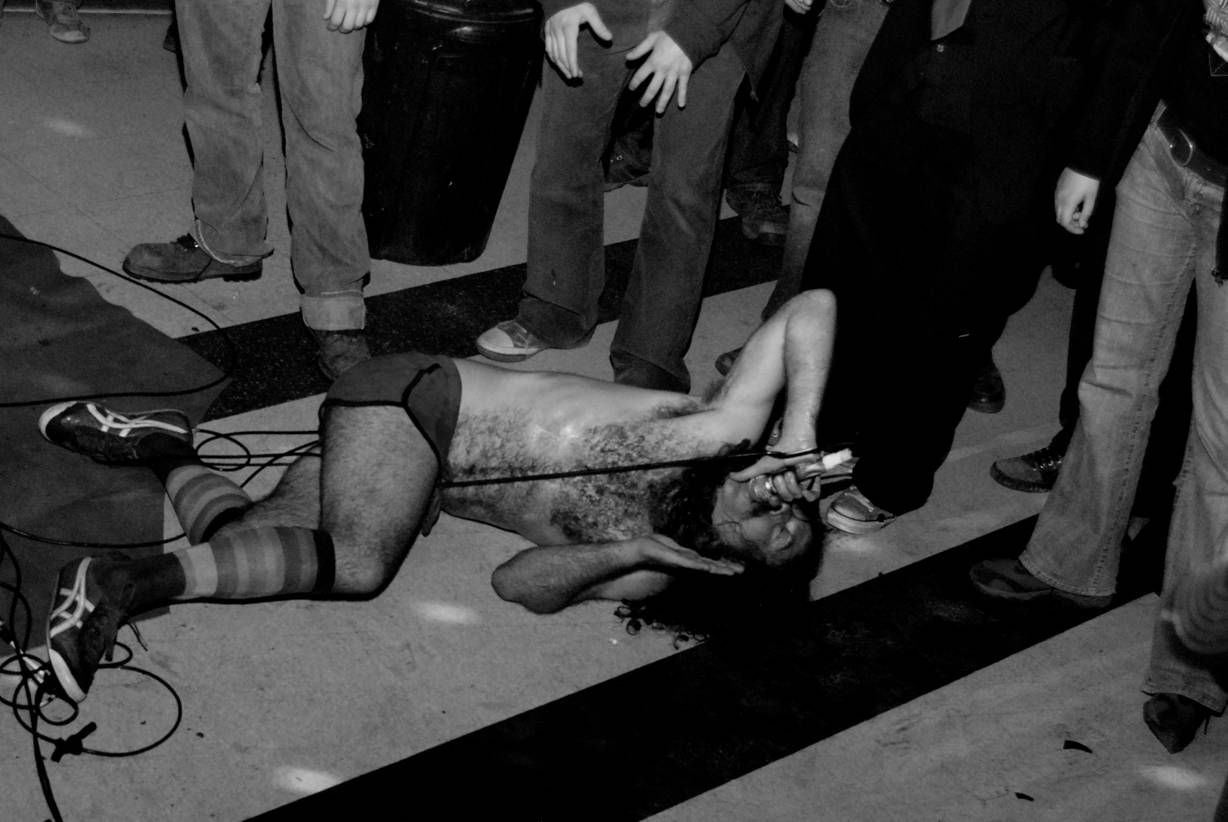 Monotonix at the Pyramid Cabaret, Winnipeg, May 21 2009. Mike Latschislaw photo

One thing about a Monotonix show, the less you know going into it the more fun you’ll have. Although it’s hard to escape hearing or seeing about the barely controlled chaos that is a performance by these three Israelis, I strongly recommend staying as ignorant as possible before seeing the band.

That said, if you’re reading this, you’ve probably seen, or heard something about the trio. After years of building a reputation as one of the finest live rock ‘n’ roll acts in the world, though, the group has finally released its debut full-length. Recorded with Tim Green of the Fucking Champs, Monotonix’ Where Were You When It Happened? (Drag City), with appropriately silly/garish artwork, captures the band’s fuzzed-out guitar, maniac vocals and unhinged beat – think Mudhoney and the Stooges, at least for starters.

We chatted with Monotonix guitarist Yonatan Gat while the band, including singer Ami Shalev and drummer Haggai Fershtman, was on its way to Portland for that city’s MusicFest NW. 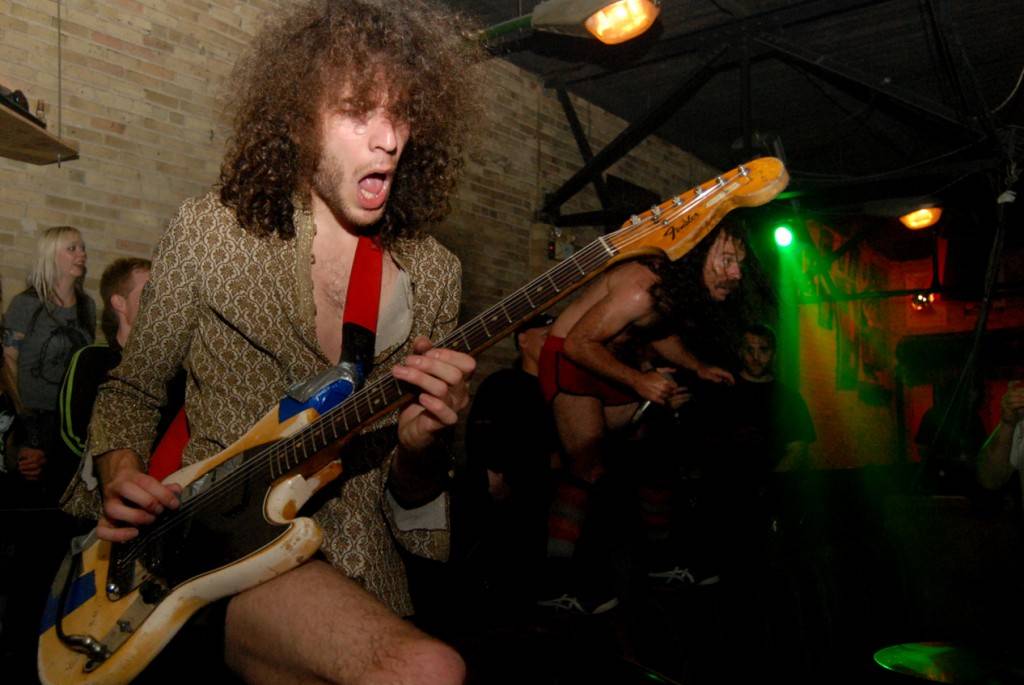 Yonatan Gat with Monotonix at the Pyramid Cabaret, Winnipeg, May 2009. Mike Latschislaw photo

Shawn Conner: So it’s just the three of you in the van?

Yonatan Gat: We’ve got a driver for this tour. So we get to relax a little bit.

SC: That’s a little bit different for you.

YG: Yeah, it used to be just the three of us crammed in a mini-van. Now we’ve got a 15-passenger van.

YG: No, nobody goes in the van with us. Why would they? My band members are not like a party band. We’re not driving people around and getting drunk. Not us.

SC: I guess you’ve got to stay on the straight and narrow doing what you guys do night after night.

YG: Yeah we like to keep it pretty healthy. Nah, I’m kidding, I like to drink. We don’t really drink before the show.

SC: Can I join your band?

YG: What do you want to do?

YG: You can just come to the show. What’s the difference? We’re not going to drive you around because we don’t know if we want to put up with you and your shit. But come to every show and dance. Our audience, I think everybody who comes to the show asks if they can join the band and we tell them yes.

SC: The audience is part of the band anyway the way you guys perform. But obviously that’s not the same as when you make a record.

YG: No, we don’t have anybody else with us, except for the engineer.

SC: And that was Tim Green for this one?

SC: So you guys are pretty happy with the way it turned out?

YG: Yeah, we love it. It’s really representative of the show and the atmosphere of the band, and I think people who like our band will like this record very much. We’re excited about it.

SC: Is there anything on this record you hadn’t played live before recording.

YG: We don’t really play the slow songs at the shows. There’s one that is only organ, vocals, another is like a romantic ballad, not really but kind of. So we never really get to play those live. It’ll be interesting to see how they work, but right now we still want to dance a little bit.

SC: How do you know when the show is over?

YG: Mmmm, we decide when the show is over. Sometimes in Canada it gets kind of crazy. Some Toronto show the audience just decided for us it was over. They destroyed all the guitar equipment and almost all the drums so we had to take everybody outside with the drums and make some kind of speed-rave [?] instead of doing the rest of the show because after 20 minutes there was nothing left.

SC: How much equipment do you guys go through on a tour?

YG: We can take care of our stuff pretty well. In Toronto, I don’t think they destroyed anything permanently. They disconnected all the cables and there was no way to resume the show. I’ve been using the same guitar rig since the band started. Actually one of the amps burned at a show in Nashville, it just started smoking, so we just took it out and used the cabinet speaker. We don’t lose a lot of guitar equipment. And drums, yeah. We have to buy new drums all the time. Cymbals and hi-hats get broken a lot. But it’s not so bad. Probably no worse than what happens to most bands.

SC: You mention the Toronto audience, which is strange, because Canadians have a reputation for being fairly tame.

SC: How are you regarded in Israel when you go back?

SC: I read that for a lot of audiences, they know what to expect. Where can you go where you can still surprise people?

YG: Europe for sure. We just toured Scandinavia and that was very cool. We played Norway and people didn’t know anything about us. It’s kind of fun to see the surprise on people’s faces when we set up on the floor and start the show. As opposed to the States and Canada where people know how to react even before it even starts. But every kind of show is fun. Even when a show is empty it can be fun. And if a room is completely packed it’s a different experience. You need to appreciate everything. It’s all a cool different way of doing the same thing.

YG: I think it’s both. The fact that enables us to play so many shows, is the way the show is built, the fact that we’re in the audience… we get to watch the show too. I haven’t played on a stage in years, but memories of being in bands that play on stage, it’s a stage, you’re elevated from the people, you’re detached from them. Sometimes the lights are on your face sometimes you barely even see them. I don’t know, it’s kind of weird. Then you can find yourself kind of doing the same thing every night. We kind of play a similar show every night, we play the same songs. But different things happen and we find different things to surprise ourselves. The fact we’re on the ground, and it’s different people coming and different cities and different cultures… it’s kind of fascinating, and it gives us the ability to play that many shows. It never fails being interesting, making this rock ‘n’ roll experiment in different cities and seeing people go wild.