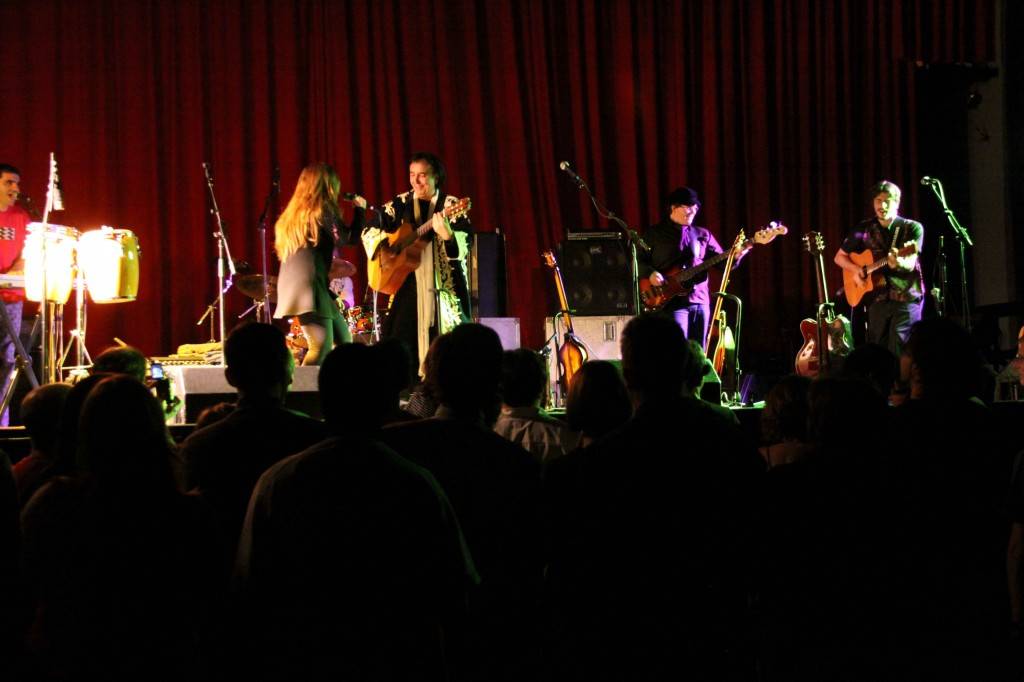 We were probably richer and poorer for having the Os Mutantes show moved from the Commodore to the Rio Theatre. The Commercial Drive cinema has great acoustics, intimacy, a beer-selling usherette in a bustier, and it’s only two blocks from my house.

Plus, the ad hoc, two-lamp lighting rig felt appropriately dangerous for a band that, at one time, was considered an enemy of Brazil’s military regime, and you could pretend that Brazilian secret police circa 1972 might burst in and start disappearing some of the elite crowd of local musicians and other scene-makers who showed up for the reconstituted TropicÃ¡lia giants. Which isn’t a bad idea on paper, now that I think of it (kidding!).

But the seats were a drag. Not that it mattered, I suppose. It took precisely one minute and thirty seconds of Yes-cum-CSN-cum-5th Dimension opener “Technicolor” for almost everybody in attendance to pitch forward en masse and join the one pork-pie hatted spazz already up there dancing in the small patch of sticky floor in front of the stage.

Aside from me (I was baked), no man or woman could have resisted. This year’s version of Os Mutantes radiated an instant and all-consuming warmth, with toothsome co-founder SÃ©rgio Dias projecting intoxicant levels of goodwill and joy from beneath a floor-length wizard robe. We should all be so happy at 57. And we should all wear wizard robes.

Dias thoughtfully incorporated “the poor people of Vancouver” into the preamble for “El Justiciero”, while leotarded and monkey-dancing firecracker Bia Mendes gave us the choice of either English or Portuguese before taking the sultry lead on “Baby” and shunting matters even further into the realm of heartburstingly awesome (and we chose Portuguese, of course).

And so it went on, getting better and better, even through the songs from the new album Haih Or Amortecedor – the first record in 35 years to carry the Os Mutantes imprimatur. As early reviews have noted, Dias and his new partners (ace drummer Dinho Leme is the only other original) have honoured the band’s legacy with material every bit as adventurous, playful, complex, virtuoso, and physically unlikely as anything the sunshine-and-psyche moppets were rolling out four decades ago. In this case, the bizarre chord progression that pinions “Querida Querida” was made ever so slightly terrifying with backwards screaming and ever-so-slightly nostalgic with a searing Dias guitar solo gunshipped in from 1968. Dias also gave “Baghdad Blues” an ominously gloopy guitar sound, while “2000 e Agarrum” was just batshit crazy, and basically has to be heard to be believed.

Os Mutantes has always had its own logic, musically speaking, dancing on the head of a pin with parts that abrade uncomfortably against each other until a subtle switch up magically brings it all together, and “2000 e Agarrum” in particular flipped thrillingly between freefall and quantum precision. Bear in mind that Dias fronts a seven-piece band of multi-instrumentalists who sing like birds and busy themselves with all manner of percussion instruments when they aren’t splattering the canvas with a variety of woodwind and stringed-things.

The band’s counter-cultural anthem “Ando Meio Desligado” came second to last (“You know, I’m feeling a little spaced out…”), with an epic arrangement that gradually turned into “While My Guitar Gently Weeps”. The wizard was on his knees by this point, all 57 years of him. So were we, kind of, if you factor out the dancing and ecstatic leaping around.