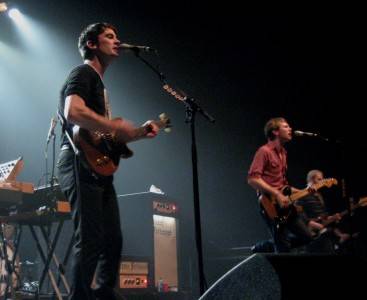 Driving through a heavy downpour to Stanley Park, I wondered if getting drenched watching the opening band for Franz Ferdinand was going to be worth it. But the concert gods relented and the rain stopped in time for what I expect is the Defektors’ Malkin Bowl debut. Unfortunately, we were stalled at the will call during the local punk band’s first three songs while staff figured out how they were supposed to handle us media types not granted photo passes.

The trio, fresh from a West Coast U.S. tour, spewed rhythmic garage rock to a swiftly multiplying all-ages crowd. Skinny singer/guitarist Ben Phillips rocked with intense energy, bassist Jeremiah Haywood hid behind his glossy dark hair and bespectacled drummer Evan Brewer bounced up and down behind his kit in a snug plaid shirt. They ended their tight 25-minute set with the catchy “Burning Light”, which you can hear atÂ www.myspace.com/defektors.

Franz Ferdinand launched straight into “No You Girls” off their January 2009 album, Tonight, with energetic Nick McCarthy alternating between keyboards and guitar.

Only in Vancouver and Glasgow would concertgoers brave the rain for a rock show, declared the ever-charismatic frontman Alex Kapranos, who wore skinny jeans and a ’70s jacket with striped knitted cuffs. The rain fell hardest during their second number “The Dark of the Matinee”, off the group’s self-titled debut. But that didn’t stop a gleeful sold-out crowd from joyously heaving up and down.

I missed Franz Ferdinand’s legendary Richard’s on Richards show in March 2004, so when I went to see them with Death Cab for Cutie at the much less intimate Pacific Coliseum in 2006, I worried they wouldn’t live up to the hype.

But even though we were distant from Kapranos in a private box, he knocked our panties off with his come-hither crooning and expert moves. I wondered if he’d exhibit the same sex appeal in Stanley Park and was slightly disappointed, not so much by Kapranos himself, but by the lighting. Too many times when he strode flirtatiously to the front of the stage he was difficult to see because no lights illuminated his sexy prancing.

But the dude’s more than just good moves and a great personality. “Walk Away”, from second album You Could Have it So Much Better, demonstrated Kapranos’ hot, deep voice. The band’s “oh yeah” at the end of “Tell Her Tonight” was positively angelic, but Kapranos’ vocals were drowned out by the band during much of “Do You Want To” until they broke it down to focus on his vocals. After this Grammy-nominated number, Kapranos shed his jacket to reveal a red and black checked shirt that looked like a hipper version of a lumberjack’s.

He got the crowd singing “burn this city” during “This Fire”, which felt a little cheesy, and busted out his guitar-playing bent-kneed creep for “What She Came For”. All the while, Franz Ferdinand bassist Bob Hardy, who wore a horizontally striped jumper and skinny black jeans, rather sedately laid down a solid groove.

“Take Me Out” rocked in all of its crunchy guitar glory and “Ulysses” matched its awesomeness and intensity and got me jumping up and down and laughing like a fool.

For the captivating “40″, Kapranos began with slightly aloof singing and the band flaunted their chops during the instrumental bit near the end. It may have been during this number that the frontman punctuated each of the crowd’s “la la las” with a breathy “yes,” “beautiful” and “so good.” I wished we were doing something else.

We couldn’t place the last song of the set which the wee drummer Paul Thomson kicked off with a little tambourine, but it culminated with all of Franz Ferdinand’s members banging on the drums.

The alluring “Michael” off of their debut album was, happily, the first song of their encore. Kapranos shook his maracas during Tonight’s “Turn It On”, and he donned wacky glasses for a raucous “Darts of Pleasure” that failed to get much of the crowd in front us moving. At times it seemed the youngsters didn’t know select older songs, or perhaps, by this point, they’d smoked themselves catatonic. A tripped-out, ’70s synth-rich “Lucid Dreams” ended the show, but the kids seemed unmoved. What’s wrong with the youth of today?

Drenched we were not, as the sky mainly spit during the show, but we left damp and satisfied, with the line “kiss me, lick your cigarette and kiss me,” rolling over and over in our heads.