Sex Party and MT-40 at the Media Club; Felix Cartel at School of Mix, Aug. 15

You may look at a band like Sex Party and start thinking about how they’re going to sound. I thought a couple things to myself before actually opening my ears and listening. A bassist with dreadlocks? This’ll probably be some sort of reggae-trance band. No guitars? Trying to be different. Female singer? Gwen Stefani wannabe. Upon listening to song after song, the prejudices I held on the band were pretty much lifted. I mean, how could I judge someone with a name like Sex Party?

I’m not usually a fan of whine-induced vocals, but Sex Party’s unique twist on singing only gelled into the music. It didn’t take away from any of the crazy synths and thrashing drums that the band threw out. It always pleases me when I come across a band that’s far from the norm, so I was stoked to have checked out Sex Party’s energetic, punk-electro sound that I certainly hadn’t heard anywhere else before.

Armed with a drum machine and synths, MT-40 had a demure, almost shy appearance at first. But after a few songs, the brother and sister duo seemed to loosen up as the crowd made a dance pit. One track in particular, “Isabella Rossellini”, got the crowd moving. As much as I resisted, I couldn’t help dancing myself, with my embarrassed boyfriend looking on and shaking his head.

They reminded me a bit of The Kills, minus the guitars and insane sexual tension (which would be awkward, since MT-40 is indeed related). Both bands use drum machines to their advantage and make catchy beats that are obviously made, but not in a poor fashion.

A five-minute walk down Cambie led us to the School of Mix, a studio space featuring local DJs and a gallery showing by Stacy Sakai and Jennifer. Featuring two floors of live DJs (which turned into one after some sort of technical difficulty), the studio sort of resembled a welcoming basement suite. Felix Cartal, from my good ol’ hometown of New Westminster, hit the turntables at 12:30 pm and had the entire studio space dancing up a sweat. I mean that literally – a random, absolutely drench guy hugged me. As gross as it was, that’s how you know a set has been good.

It was strange to see Felix Cartal, who was from the same small, random Vancouver suburb and took the same Musical Composition class as I did, up there. Using programs like Reason and Cubase, students would make a lot of beats and synth lines, but they never sounded all that professional. Who knew someone from that class would actually make it? Seeing him spin out techno and electro tracks that were either of his own making or remixes gave me hope that some random girl from the suburbs can possibly get her music on the radar and tour across Canada, the US, Europe, and beyond.

Overall, I found Olio to be a brave attempt at showcasing Vancouver’s underground talent, but there’s yet to be a festival here that is groundbreaking and proves to the world that we’re not just a pretty city next to the ocean with mountain skylines. We’ve got a unique, heavy, different arts underbelly that definitely needs to be brought to the world’s attention.

One of the cool things about the Olio Festival is its mandate to incorporate comedy and visual art with live music. Naturally, the comedy is programmed earlier in the evening, perhaps because people are still sober enough to appreciate a fast comeback and witty banter.

Last night, Aug. 14 (Friday), the Biltmore Cabaret hosted some of the city’s sketch troupes before dancefloor mavens like Flosstradamus (love that name) took over. For someone unfamiliar with the scene, the sketch show was an eye-opening introduction to Man Hussy, Pony Hunters, Box Studios, Weekend Leisure, and Bronx Cheer.

Man Hussy‘s Cameron McLeod was the de facto host of the evening, despite dying in the evening’s first film. A short about a guy who can’t get enough electric toy car racing, to his inevitable and timely demise, it had some genuinely funny moments, especially early on when McLeod gets a rejection letter from the Indy 500. The troupe carried on after the film, riffing on the idea that McLeod was really dead until he emerged, head bandaged, from a box onstage. Maybe you had to be there, but the whole thing had some good ideas. The biggest laughs definitely came from the editing of the film, though.

Weekend Leisure‘s short about iPhone apps was also masterfully edited. The film began with two girls talking about an iPhone; the laughs came from the dubbed male voices substituted for theirs, and continued as the Weekend Leisure App was shown; basically, it was a screen showing the four Weekenders looking bored into their webcams, as though trying to come up with ideas. Funny stuff.

Sean Devlin‘s deadpan expression as he wielded a stuffed bird at the end of a stick made his and partner Mark McGuckin‘s sketch, a sly commentary on NIMBYers trying to stop birds from mating in their bog. Also worth noting: Devlin’s poorly applied blonde wig when the mustachioed comic portrayed McGuckin’s wife.

LHM/Box Studios‘ film had some laughs, although one of the characters talked just like the Asian gangster dude who was stuck in the trunk of the car in the movie The Hangover. Sometimes the poor sound quality of the films and/or the bar’s p.a. (unsuited to the task, perhaps) made it difficult to make out the dialogue, but the film – set in an alley – was about a dispute over a pair of gloves. I think LHM might also have been influenced by the movie Pootie Tang. And if you’re going to be influenced by a movie, that’s the one.

A short film by Paul Anthony for his variety show at the Biltmore collected some highlights from the monthly (every first Wednesday) event, Talent Time.

However, the Biggest Laughs of the Night Award goes to Bronx Cheer. Craig Anderson came out to recount his experiences at music festivals and then “the Real Flea” emerged. Butt-naked except for a bass guitar (which he didn’t know how to play), his hair dyed an unnatural blue, the Real Flea (Conor Holler) and Anderson traded quips back and forth that seemed largely improvised and were downright hysterical. Recounting any of them here wouldn’t do them justice, plus I was laughing too hard to take notes. Trust me, though; it was sheer comic brilliance for a solid five minutes. Now, put your clothes back on.

Love and Electrik, The Modern, Aug. 13

IfÂ  a show can be judged on how much better you feel after it’s over than when you first entered the club, then Love and Electrik‘s set last night was a rousing success.

Chowderheaded bouncers, an invasive pat-down, and an i.d. scan and photo all combine to make going into The Modern a wretched experience comparable only to international flight or entering a Turkish prison. It would be fun to blame the owners, the stupid “Bar Watch” program, or dudes packing heat on the dancefloor. But in the end, the blame lies squarely on patrons who, like sheep, put up with such measures. You get the nightclub you deserve; here’s a crotch-grab, have a good time.

That said, Love and Electrik’s brief set lived up to expectations; Roxy Aiston (vocals, hair) and Kevin Mah (beats, Vocodor) not only segued seemlessly from grandiose synth pop to Off-the-Wall dance to Cafe del mar-style electro-chill, but the duo kept the dancefloor in front of the makeshift stage (normally, DJs provide the music at The Modern) full. I enjoyed the first half of the set, before Mah’s pointless but crowd-pleasing Vocodor version of “In the Air Tonight”, more than the second. But the hot ‘n’ heavy “Sex Video” brought it back at the end. (It’s worth noting that Love and Electrik also covers Vanity 6’s “Nasty Girl”.) 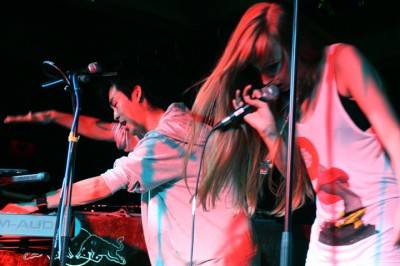 Tremendous Records, a new club rock label from Team Canada, have signed the duo. Before their set, a label rep announced upcoming 17-date Canadian tour by Love and Electrik.