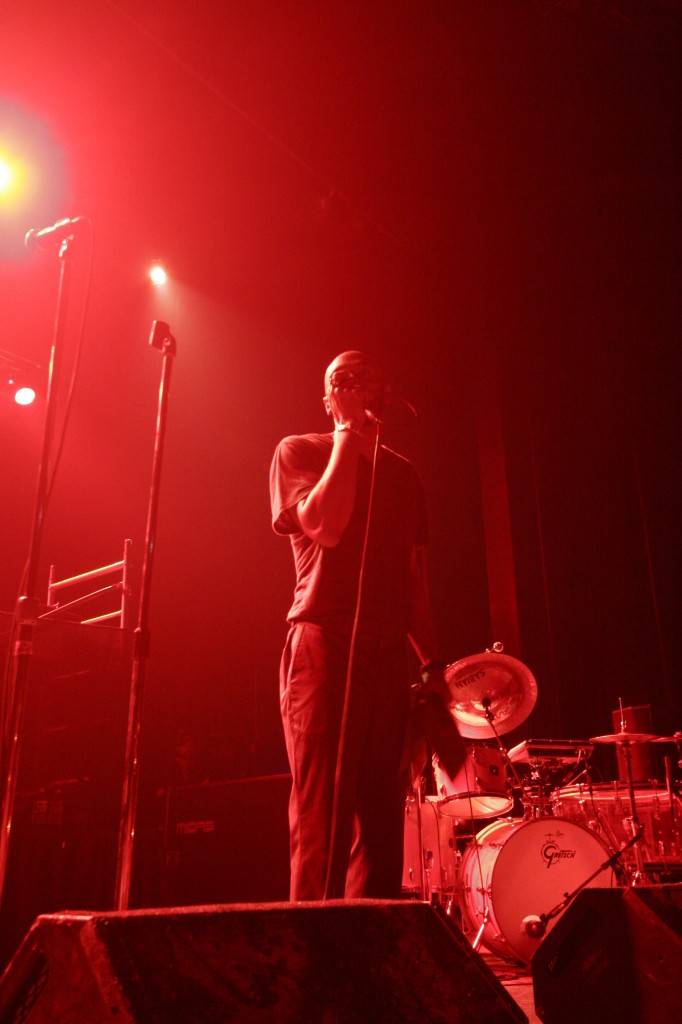 The Vogue Theatre stage was transformed from dull to sexy the moment Mos Def walked on.

“Turn the red lights up. I only want red lights. More. More. There. Yeah!” were pretty much the only words he uttered aside from when he was performing. And as the red lights became brighter, so did his smile and the MC’s energy.

But before the red lights sex-ified the theatre, Mos Def rocked out on some bass drums. The only instrument on stage, he kept going back to them, and he played about five songs on the drums. Every time, he looked like a kid in a candy store. It felt like Mos Def found a new hobby, and he was using his live audience to showcase this new talent.

In between his drum solos and the high energy beats his DJs were spinning, Mos Def showed that he can not only rap and sing, but he can perform. He didn’t really address the audience for it seemed he had entered a performance zone that couldn’t be broken, and I am really happy to say that I was a part of that zone.

Around the halfway mark of the show he began performing the usual suspect songs, “Ms. Fat Booty” (from the album Black on Both Sides) “ReDefinition,” (a collaboration with Talib Kweli from Blackstar) “Sex, Love & Money” (The New Danger) and “Travelin’ Man” (We are Hip Hop, Me, You, Everybody) and each version of the song was better than the last.

But it was his tribute to Michael Jackson that completely wowed me and made my respect for him as an artist grow.

Everyone has been jumping on the Michael Jackson bandwagon, doing tributes, wearing white gloves and even attempting to moonwalk. But very few people have the ability to pull off a tribute to the late pop star that can emulate the many talents he had, until last night.

Mos Def came out wearing a simple, black t-shirt tucked into his perfectly fitted, sexy dress pants with the cuffs of his pant legs rolled up to show off his black dress socks and what appeared to be black alligator penny loafers. He looked crisp and polished. He’s a pretty fashionable guy, so I just assumed his outfit was representing his impeccable style. But I think he proved me wrong.

Halfway through the show, Mos Def made his way to the drums and began to play “You Rock My World” (off Jackson’s 2001 album Invincible). It was really good, but I assumed it was going to be a short version of the song so that he could be known as paying his respects. Wrong.

A minute and a half after the song began, he broke away from the drums, grabbed the microphone and did a full rendition of “Billie Jean”, moonwalk and all! It was at this point that I realized his outfit was the hip-hop version of Jackson’s signature white t-shirt and black pants outfit. And the accolade was not over when the song finished. He kept going back to the “You Rock My World” beat throughout the entire show. It was the best Michael Jackson tribute I have seen thus far.

Michael Jackson was not the only artist that Mos Def paid his respects to: The Notorious B.I.G., Stevie Wonder and Aretha Franklin just to name a few. It was as though last night’s show was his way of thanking everyone who has had influenced him as an artist. And I respected the way he showed his respect.

One response to “Mos Def at the Vogue Theatre”