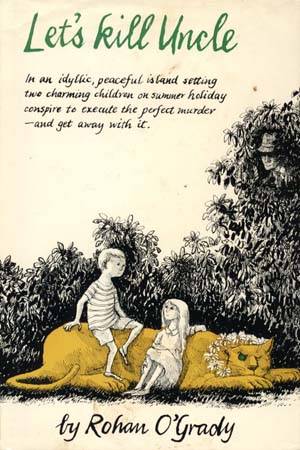 Bloomsbury, the UK publisher, will issue a new edition of Let’s Kill Uncle, a dark 1963 novel set on a  remote B.C. island.

Originally issued in 1964, the novel was the third issued under the pen name Rohan O’Grady by June Skinner a Vancouver writer. Working in isolation from any kind of writers’ community, often when her children were in school or in bed, Skinner wrote five published novels between 1960 and 1981.

Despite some flirtations with Hollywood – Let’s Kill Uncle, which was illustrated by Edward Gorey, was made into a 1966 movie – the writer’s gothic novels eventually fell out of favour, and little had been heard from “Rohan O’Grady” in subsequent decades. (Skinner published her last novel, The May Spoon, under the name A. Carleon.)

But earlier this year, an article by Theo Schell-Lambert in the monthly San Francisco-based magazine The Believer reignited interested in Let’s Kill Uncle. In the piece, Schell-Lambert relates the effect the novel had on one of his teachers at a private school, and consequently on generations of East Coast schoolboys who were also exposed to the novel about a plot to kill a rich, abusive relative. Haunted by the book, Schell-Lambert relates his efforts to find out more about its author who, he discovers, was (and is, at 86) alive and living in West Vancouver.

Thanks to Schell-Lambert’s piece, two subsequent articles appeared in the Vancouver press – one in the North Shore News by Laura Anderson, and another (by this writer) in the Vancouver Courier.

The Bloomsbury Group, a new subsidiary of Bloomsbury, will publish the new edition of Let’s Kill Uncle sometime next year. According to the website, “This is a wonderful new series of lost novels from the early twentieth century, books recommended by readers for readers, being brought back into print for a new audience.”