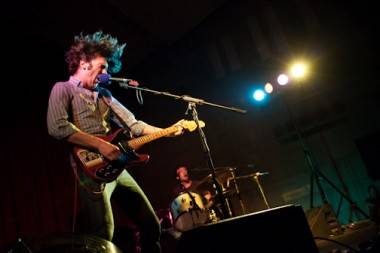 Review and photos – Japandroids at the Rickshaw Theatre, Vancouver, Aug 7

Just eight months ago, Japandroids were like any other noise band, toiling in obscurity and playing to half-empty dive bars. But 2009 has been kind to the duo, and thanks to a wave of blog-generated hype, Japandroids’ show on Friday night (Aug. 7) was held in a jam-packed Rickshaw Theatre.

Guitarist Brian King and drummer David Prowse took the stage near midnight, opening with an ambient drone that was little more than pulsing feedback and wordless moans. Despite his tall, lanky frame, King had his microphone stand set low, meaning that he had to hunch with his legs spread in a slightly comical “power stance” (a la School of Rock).

To make matters worse, King had a large floor fan pointed directly at him; with the wind dramatically blowing his long hair back from his face, he looked a bit like Zeus atop Mount Olympus, or at the very least Scott Stapp in the “With Arms Wide Open” video.

Still, no amount of overblown posturing could obscure the fact that Japandroids’ live show is pure rock ‘n’ roll mayhem. The duo played nearly all of the LP Post-Nothing (only “Sovereignty” and “I Quit Girls” were absent), as well as a selection of older cuts.

With two amplifiers plus a Fender stack issuing a wall of fuzz, the pair tore through a thundering version of “The Boys Are Leaving Town”, which was especially fitting given the massive international tour that the band will soon embark on. The highlight came mid-set, with the pounding, almost-funky “Heart Sweats”. With a one-chord verse and a refrain that consisted of screaming “XOXOX”, it was garage rock at its most primal.

Japandroids clearly considered the show a victory lap, a chance to indulge in the success they’ve had over the last few months. King dedicated the breakout hit “Young Heart Sparks Fire” to “every fucking one of you,” and both he and Prowse repeatedly marveled at the size of the audience. They finished with a series of older songs, joking that only the hometown fans were likely to know their early material. And, unsurprisingly, given the volume of friends and neighbours in attendance, the crowd ate up every minute of it. 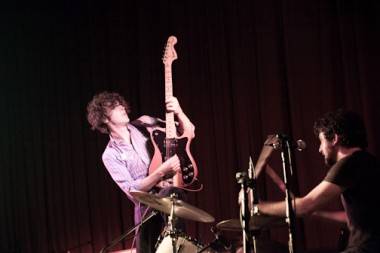 Second on the bill was the Victoria-based Listening Party. Despite a five-piece lineup, the band’s approach favoured minimalism, with many songs based around one-note basslines and swells of synth noise. With tribal drumming and garbage can percussion, the band’s harmonized chants evoked Animal Collective at its most straightforward. The highlight was singer Lindy Gerrard, whose vocals ranged from an angelic falsetto to a rich baritone, effortlessly rising above the clattering arrangements.

The evening was opened by local noise rockers Twin Crystals. The group’s raucous post punk assault was convincing enough, although the songs were rarely memorable. The set ended with singer Jesse Taylor tripping backwards, rolling behind his stack of amplifiers, and intentionally pushing it over on top of the microphone. Trashing the instruments may have worked for the Who in 1965, but here it came off as a heavy-handed.