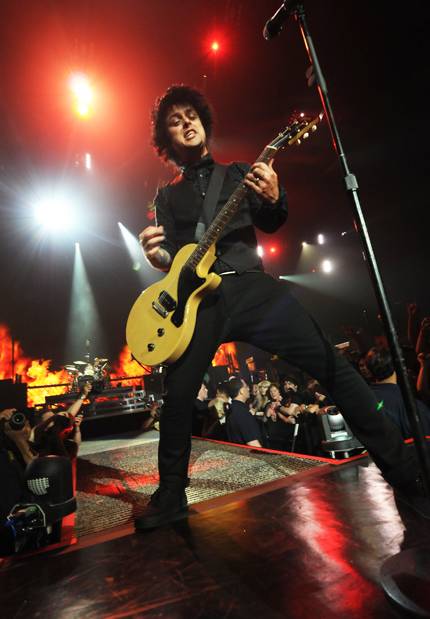 Cynic2: [pause] Well… I’m trying to think of something negative to say about it but… I can’t.

Something about Green Day – the band’s success, Billie Joe Armstrong‘s hair, Tre Cool‘s hair, name and Marty Feldman eyes – sort of kind of makes you want to take the piss. If only to stay in practice. But Saturday night’s July 4 show at GM Place, the second of the current 21st Century Breakdown Tour, rocked mightily. Even a final, acoustic version of the Seinfeld song, “Good Riddance (Time Of Your Life)” was pretty good.

Acknowledging the American holiday early on, Armstrong snarled “Fuck July 4! This is our independence day!” He needn’t have bothered; he had the 12,000 or so fans eating out of his palm from the opening pre-recorded “Song of the Century”, the trifle that bookends the new 21st Century Breakdown record. Blasting The Ramones‘ “Do You Remember Rock ‘n’ Roll Radio” right before coming out didn’t hurt, either.

The black-clad Armstrong – well, the whole band wore black, even the two side players and long-time additional guitarist Jason White – worked the audience like a tent-show evangelist preaching the Last Days, provoking singalongs every other tune and pulling people onstage to dance, sing, play guitar and pump water-guns into the crowd. Moms, dads, Gameboy-playing kids, old-schoolers who might have caught the band’s first Vancouver appearances at the Nappy Dugout or Cruel Elephant (both acknowledged by Armstrong), and a new generation of fans – the 20-year-old next to me said she switched to punk from “boy bands” when she heard American Idiot‘s “Wake Me Up When September Ends” – were on their feet for the whole show, no small accomplishment in a place as sterile and big as GM Place.

And if it was hooks you wanted, Green Day has nearly 20 years of pop-punk hits to draw from, never mind that the strongest material comes from American Idiot and 21st Century Breakdown. Both albums were well-represented at the beginning, end and in the encore; the middle was given over to tunes from Dookie (“Basket Case”, “Longview”) and Nimrod. The latter’s ompah-punk “King for a Day” led into a version of “Shout!” that saw Armstrong lying prone on the stage extension and crooning a medley of “Swanee” and “Stand By Me”. Oh, and lest I forget, there were plenty of pyrotechnics, from flashpots to showers of sparks, that the arena probably hasn’t seen since the last time Kiss came through.

Sheesh. Was there anything to complain about? Well, the band didn’t play “Wake Me Up…” or “Last of the American Girls” (I don’t think). And I didn’t like the weird astrological tattoo on the back of the girl sitting in front of me. But other than that, no.