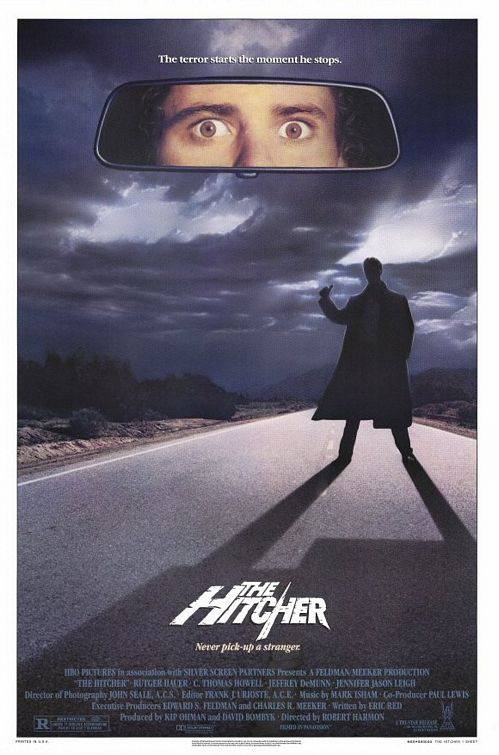 The other night, along with some friends, I watched The Hitcher, which is undoubtedly one of my top five favourite horror films of the ’80s. I loved it, as I have every time I’ve settled in with the movie. What is that now – at least a dozen times? It’s like comfort food at this point.

The plot is tight, sleek, scary, and simple. It follows C. Thomas Howell’s Jim Halsey character as he drives day and night, transporting a car to California. In order to help stay awake, he seeks company in the form of a hitch-hiker (Rutger Hauer) who turns out to be a mega-psycho randomly slaughtering anyone nice enough to pick him up. Our young protagonist is all set to be the next victim, but manages to get away at the last moment. He’s then stalked relentlessly and framed for other killings by the creepy killer, who never seems to be less than a few moments behind him. 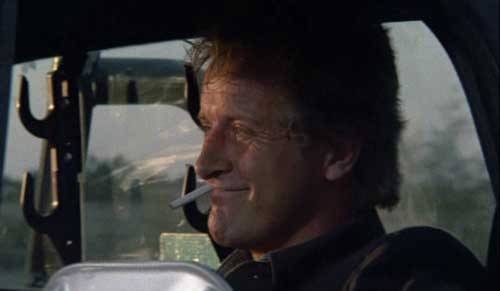 At the time it came out, squeamish critics didn’t like how relentlessly unnerving it was and saw to it that movie would be far from well-received at the box office. In fact, The Hitcher didn’t even recoup it’s $6m budget, which may explain why, to this day, it isn’t generally regarded as one of the most noteworthy of it’s genre, and doesn’t often make it onto horror nerds best-of lists – where I contend that it belongs.

Take for instance, the most influential and powerful of movie watchers: Roger Ebert. Ol’ Eturd didn’t like this movie. I don’t mean that he casually tossed it a thumbs down before moving on to sing the praises of movies like Tomb Raider 2 – I mean that he despised it. He vomited down its throat. Roger went so far as to bestow The Hitcher with what is, in his profession, the ultimate insult. That’s right: zero stars. And keep in mind that this is the same critic who gave a donkey-anus of a movie like Cop and a Half three stars – the same rating he gave to Blade Runner, incidentally. 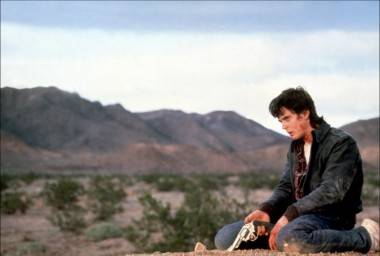 C. Thomas Howell in The Hitcher.

Ebert gnashed his teeth and killed the films success with these words after the film premiered in 1986: “What is particularly sick about The Hitcher is that the killer is not given a viewpoint, a grudge, or indeed even a motive. He is deliberately presented as a man without a past, without a history, who simply and cruelly hurts and kills people. Although he spares the movie’s young hero, he puts him through a terrible ordeal, framing him as a mass murderer and trapping him in a Kafkaesque web of evidence…

“This movie is diseased and corrupt. I would have admired it more if it had found the courage to acknowledge the real relationship it was portraying between Howell and Rutger, but no: It prefers to disguise itself as a violent thriller, and on that level it is reprehensible.” 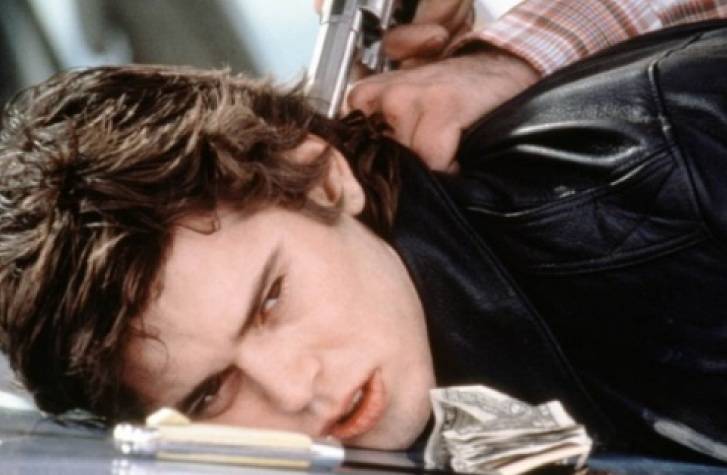 Ugh, he has a “motive”, you fucknut – and the movie plainly acknowledged the “relationship”. The Hitcher, John Ryder, wants to be put out of his misery. Jim Halsey is the first person (out of god knows how many) who puts up an effort to fight against him. Ryder recognises this and pushes the young man until he’s unhinged enough to do the dirty deed. You would have to be such an intently shitty film reviewer to miss that very obvious element, and it goes right over Roger’s head.

The writer, Eric Red, is the same man who wrote Near Dark, which is one of the other unforgettable cult-classics of the era, and yet another movie that only seemed to find its audience years after the fact. As much as I love Near Dark, however, it’s The Hitcher that I’m just adoringly obsessed with. The movie seems just about flawless, and I’ll verbally sodomize Ebert or any other greasy meatflap who says different-like.

Red found inspiration from that peppy jingle by The Doors, “Riders on the Storm”. You can see the influence during the ominous thunderstorm in the beginning credits, the “killer on the road” lyric, and the fact that the Hitcher’s name is “John Ryder”. Red noodled the plot when he was driving cross-country by himself, and stopped to pick up a very scary mentally-unhinged fellah who was hitchhiking. Red told the weirdo to get lost, but wondered later what would have happened if he couldn’t have gotten rid of him.

I’m sure you’re enjoying my fanboy-esque ravings here, but I’d be neglecting a fascinating plot point if I didn’t go into detail about Red’s close, personal connection with the act of killing oneself. He brings it up often in his movies, and it’s some dark, soul-searching shit. Every time I witness one of his main characters sob and toy with the idea of ending it all, I think about the time Eric Red tried to kill himself, with tragic consequences.

Besieged with enduring financial pressures and custody issues with his ex-wife, Eric attempted suicide on May 21, 2000 in Los Angeles. Sadly, all he actually accomplished was the death of two other innocent people.

It wasn’t the first time he’d tried snuffing himself, according to his ex. She reported multiple instances in their years together of Red holding a gun to his head, saying stuff like “I can’t handle it anymore”. But this time it wasn’t a gun, it was his 1994 black Jeep Grand Cherokee Laredo which he used to randomly rear-end a Honda stopped at a red light. Thirty seconds after the other driver got out to inspect the damage, Eric floored it, and jack-knifed the Honda into oncoming traffic. The horrified girlfriend of the driver was still in the car and scrambled out as Red pushed past it, and bulldozed at an estimated 35-40 miles per hour the wrong way across Wilshire Boulevard.

Who knows what was going through his head as he jumped the curb and obliterated a bus stop, hitting 26-year-old David Roos, who was running for his life. With David helplessly pushed under the front wheels, the Jeep then careened through out an outdoor patio of tables and bashed into several bodies, one of them belonging to 34-year-old lawyer Noah Baum.

Red did not stop there. He ham-slammed through the plate-glass windows and front doors of a restaurant, halting only after running aground on a heavy mahogany bar. As the dust settled, sounds of screaming came out of Jason McCourt, a 20-something young man who was pinned between the jeep and the bar. A few seconds later, Eric himself began screaming and shaking his head violently. Witnesses told police that Red was “flailing his arms around” and “shaking hard and screaming like a lunatic” as he exited the vehicle.

A crowd quickly formed and rocked the jeep off the bar, finding McCourt alive, but with a broken leg and fractures to his hips and pelvis. Immediately below him, Baum was squashed into a sitting position, and quite dead. Also under the debris, soon to expire the next day from his massive internal injuries, was David Roos.

Distraught, Red reportedly walked away from his vehicle, picked up a sharp stick, and begin stabbing it into his chest. This failed to do much, so the screenwriter then picked up a shard of broken window glass (approx two inches thick) and slashed wildly at his neck, cutting it deeply. Seeing this, several bar patrons dogpiled, wrestled him to the ground, and tied an apron around his throat to stem the heavy flow of red shooting out of Eric. (In The Hitcher, Rutger Hauer’s character menaces his victim by asking, “You got any idea how much blood jets out of a guy’s neck when his throat’s been slit?”)

They then covered him with a tablecloth to prevent shock. As they lay it down on him and awaited paramedics, Eric Red reportedly told them: “Don’t bother, I just want to die.”

Like OJ Simpson, Eric had no problem with criminal charges, but a jury in a civil suit found him guilty and awarded over a million dollars to the families of the two men killed in the incident. In 2005, as a douchebag named Michael Bay got ready to remake (sigh) The Hitcher , family members of the victims unsuccessfully lobbied the District Attorney’s Office to reopen the criminal case.*

In a very disturbing coda three years after, Eric Red wrote a script called Fenderbent. It’s a doozy. To quote: “The SOUND of the DEAFENING REVVING ROARS of the ENGINES and the SMASHING of METAL against FLESH and BONE.”

That’s right: A movie about a group of high school students who encounter road-related maliciousness–as cars run down pedestrians in an elaborate sport where you collect points for each corpse you create.

*A remake of The Hitcher, directed by Dave Meyers and co-crediting Eric Red as a screenwriter, was released in 2007.