On her website, Sarah Slean celebrates her auto-didactic habits in a section called “Vitamins”.

Vitamins lists the books, music and whatever else (Daniel Ariely‘s TED talk on why we steal, for example) is inspiring her at the moment, and which might just as well be called “helpful hints for hungover journalists.” Ask about any of the listed items, like the David Adams Richards novel she championed for Canada Reads (a nation-wide book discussion group), and the Toronto singer-songwriter is off and running – as you’ll see.

Last year, Slean released her fifth album, The Baronness, and has followed up with an EP of covers with the Art of Time Collective called Black Flowers. Her music is (often) piano-based, with orchestral flourishes and a sensual approach to pop melody and arrangements – Kate Bush is probably the artist that comes to mind most often, for this writer at least.

This year, Slean will graduate (philosophy and music) from the University of Toronto, but before she collects her diploma she’s embarking on what she’s calling “the Recessionista Tour”; for each show, she’ll wear a dress created by a different Toronto designer and made from recycled materials. 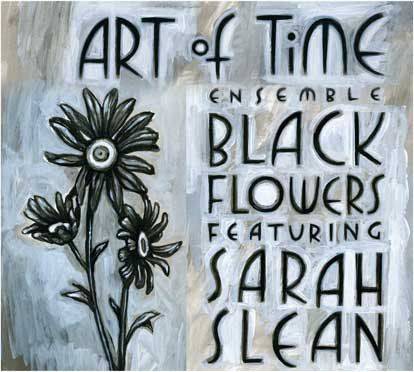 Shawn Conner: So all the songs on Black Flowers are your choices?

Sarah Slean: They are. It was like I was the little curator – I felt that was my role, to bring these songs I felt were underloved. With the exception of the Cohen songs, of course. Songs that needed more celebration. Sarah Harmer and Feist‘s record were really big but these songs in particular [“Lodestar” and “Monarch”, respectively] I thought were just masterful pieces of art.

SC: You weren’t tempted to do a Peaches song?

SS: [nervous laughter] No, I’m not sure it would lend itself to that ensemble.

SC: I think you’ve mentioned Joni Mitchell as an influence, and I’m reading this book about her “blue period”. The writer, Michelle Mercer, mentions in the introduction that she used to test prospective boy friends based on their reactions to the Joni Mitchell records she’d play. Do you have any test records?

SS: Heavens, no. I don’t have any test records. But there were some records, that if they were in a guy’s possession, were just a deal-breaker.

SC: Can you name them?

SC: Have you seen Leonard Cohen on his current tour?

SS: I haven’t, but I met him actually at a Canadian Songwriters Hall of Fame gala. I met him a couple of times that weekend. And I really felt like I was in the presence of somebody truly extraordinary. He felt like this ancient, sage messiah type. I went up to him at dinner break, it was a big catered dinner, and I knelt down beside him.

He’s so frail, he just looked so thin and delicate. He took my hand in his hands, and was looking at me with these oceanic brown eyes, and they’re already, and I just thought, Oh my God, what those eyeballs have seen. I think I said something utterly obsequious, like “You have no idea how huge you are in my world.” And he was so gracious, and so charming. As you would expect. 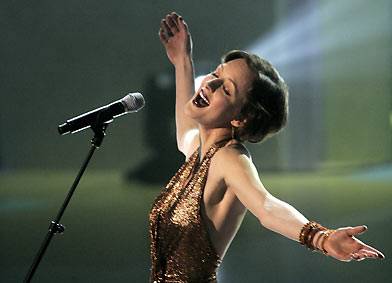 SC: He seems like he would be… especially to young women.

SS: Yeah, he likes the ladies.

SC: You recently completed your degree in philosophy and music at U of T. What are you going to do now? Are you going to be adrift in the cosmos without classes?

SS: This is what I’ve discovered in my 10-year undergraduate journey; you don’t necessarily need the institution of higher learning to continue your higher learning.

I took a break for about seven years, which is why it took me so freaking long. But I was always reading, because I’m curious. And the world is so infinitely fascinating. I’m looking out my window right now and I can see 12 things that I could study, probably for the rest of my lifetime, and still be interested in years from now, and never fully understand. You can never know it all, about any of these topics – this beautiful tree I’m looking at now, or train travel, or that little dog, all of these things are universes unto themselves. I don’t know how you can stop wanting to learn.

SC: How do you prioritize?

SS: Annie Thompson, one of the designers who I’ll be wearing on this tour, is fifty years old, and she’s insanely creative. She’s mainly made her career as a clothing designer but she’s also a painter, an installation artist, a sculptor. She said to me, and I’ve never forgotten this – it was like a light bulb went on and angels started singing – that “all my life people have been telling me to focus.” And she said, “You know what? I don’t want to focus. I want to do it all! I only get one life. Let me do it all.” And I totally concur.

SC: And it flies in the face of conventional wisdom.

SS: You know what, I’m sure if I spent the rest of my life studying only the piano, that I would miss my gift. If you are so narrow, if you and your consciousness or ego, think you have a plan and you construct that plan and follow it mercilessly you’re going to miss all that serendipitous magic that is beyond your understanding, and which to me is the real guide in your life. Every time I decided consciously, “Oh, I should be going this route, because it makes more sense. And blah blah blah, there’s no future to this music thing and it’s too scary and I’m too smart and I’m wasting my intellect, I’ll go this route,” every time I diverted that way from the path, something in life guided me back. Always. So something out there knows. You think you know. But you don’t know.

SC: This reminds me of what you wrote on your site about Mercy Among the Children, the David Adams Richards novel, and defining yourself with the infinite.

SS: Well this is a book I championed without success on Canada Reads. And it was voted off on the first round [laughs]. But I was beside myself because I was so eager to sing its praises. It changed my life, and that’s why I chose it. It’s a really sad book, tragic, painful to read. But it does what I think what all great literature should do, and that’s to make you think about your life differently. And that’s what it did, for me.

SC: It’s not as depressing as Revolutionary Road, is it?

SS: Well that one I found oppressively sad. And it’s kind of a cliched trope, too – the whole “suburbia is sucking the life out of me” has been done a million times, then they devour each other and it’s over. The David Adams Richards book is infinitely more philosophical. It’s about what it means to be an individual, and how an individual achieves meaning. Live only means something if you decide what it’s going to mean. If you can make it to the end, it will reward you.

SC: And so this Recession-ista tour, are you doing a lot of stuff from Black Flowers?

SS: One or two songs, as well as some covers I’ve never played. And songs from The Baronness, as a goodbye to this album.

SC: How close are you to finishing writing your next record?

SS: Well that’s going to take some down-time, which I haven’t really had since the beginning of this year. I am so looking forward to going away for awhile and starting the writing process. I feel like there were a lot of narratives on The Baronness that were similar to those on my previous records. They kind of reached a conclusion on The Baronness. Like “Looking for Someone”; I think I took all of my songs about bad relationships with men and put them into one simple song. The Baronness is the back cover of a book. It’s also the end of my decade with Warner. And I feel the next album is going to be something really amazing, art from a new place for me. I said to my friend the other day that I was really tired of making music from pain. And I think that’s behind me.

SC: And do you know where you’re going to go to write this record?