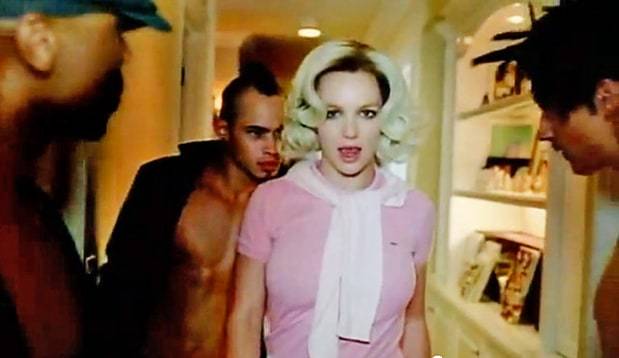 Britney Spears in her “If You Seek Amy” music video.

The word “fuck” has lost a little of its cache. At a recent Hollywood gala honouring Tom Hanks, Julia Roberts took the microphone and began, “So Tom, everybody fucking likes you.” She’s supposed to be America’s Sweetheart, so I guess that means nothing is sacred.

Here are ten songs in which the f-bomb still packs an explosive punch, reminding us that the word actually used to mean something.

Contrary to the stereotype we now carry about the socially stultifying 1950s, there was plenty of smut in the era of Eisenhower. At least before 1955/56, that is, when rock ‘n’ roll exploded and the censors swooped in to put a stop to all the fun. But prior to that, white kids didn’t listen to soul music, meaning that African American musicians had the freedom to be as filthy as they wanted. Case and point: “Rotten Cocksuckers’ Ball”, a barbershop-style a capella tune with lyrics that shamelessly glorify visiting a brothel. It would be decades before singers could get away with being this dirty again.

This politically charged folk song was John’s blatant attempt to rewrite “Masters of War”. But not-so-subtle pilfering aside, there’s something very satisfying about listening to him sneer about “fucking peasants” just seven years after he and three other mop-topped lads appeared on The Ed Sullivan Show, singing songs about wanting to hold your hand. The song is a rallying cry for the oppressed masses, with political criticisms culled from Brave New World: “Keep you doped with religion, sex and TV.” As well as appearing on John Lennon/Plastic Ono Band, it was included as the B-side to the peace anthem “Imagine”, making it all the more acidic by contrast.

But I believe in this and it’s been tested by research:
He who fucks nuns will later join the church

I’d like to see Joe Strummer’s sources on this research. And no – your friend Gary doesn’t count. Regardless, it makes for a classic “Did he just say that?” moment. Never try to pigeonhole The Clash: musically, they’re blistering punk one moment, horn-laden reggae the next; lyrically, they’ll offer up ominous warnings about police brutality, then joke about nun-fucking just two tracks later. The song makes a serious commentary about the wasted lives of the British lower classes, but the message gets a little lost – nun-fucking tends to have that effect.

The jury has found you guilty of being a redneck, white-bred, chickenshit motherfucker

The only part about this choice that was difficult was singling out which of the song’s many F-bombs was most inflammatory. I chose the above mostly because it didn’t include any racial epithets (that’s a whole other list), and also because it provides context for the song’s courtroom context. Ice Cube, MC Ren, and Eazy-E each offer testimonials – ostensibly to condemn police brutality, but mostly they just brag about how bad they’re going to fuck up the next cop who crosses them. The song is so outrageous that the FBI wrote a strongly worded letter to Ruthless Records, who released the album Straight Outta Compton in 1988 (but I bet it wasn’t as strongly worded as “Fuck Tha Police”).

I wish I was special
You’re so fucking special

Even more so than the titular chorus lyric, Thom Yorke’s pained f-bombs provide the pivotal lyric for his group’s anthem of self-loathing. The lyrical equivalent of the muted ka-chunks that lead into the chorus, the profanity provides some much-needed catharsis for the barely-repressed desperation bubbling beneath every word of “Creep”.

Drivers are rude, such attitude
When I show my piece, complaints cease
Something’s odd, I feel like I’m God
You stupid dumbshit goddamn motherfucker

What makes this song so memorable is that children loved The Offspring. I don’t think there was a kid in my fourth grade class who didn’t own Smash (or at least none that would admit to it). “Come Out and Play” might have been the hit single, but it was “Bad Habit” we all loved, gathering around a Walkman at lunch time and rewinding it over and over so everyone could have a listen. For a nine-year-old, the bridge of “Bad Habit” is something akin to a porno magazine for a 13-year-old, or alcohol for a 15-year-old – a little scary, a little shocking, but completely fascinating.

When breaking up with dignity is no longer an option, there’s always “Song for the Dumped”. The song is a masterwork in juxtaposition, from the joyously poppy chorus of “Give me my money back, you bitch” to the ridiculous saloon piano break. What’s funniest is Ben’s complete overreaction to what appears to have been a fairly standard-issue breakup – it’s pretty easy to see why she needed space after this tantrum.

The men are surprised by the language
They act so discreet, they are hypocrites so fuck them too

There are two different methods to laying an effective f-bomb: the first is to be inflammatory as possible, and flaunt the profanity as a slap in the face of any fuddy-duddy who can’t handle it; the second is to subtly include the word in an otherwise passive song, its unexpectedness giving it maximum impact. “Dress Up in You” is perhaps the best example of the latter approach. Stuart Murdoch assumes the character of a meek woman working in a nail salon, griping over her more beautiful and successful friend. The narrator is so wounded that it’s remarkable she can even sum up the energy to drop the f-bomb into the chorus – which, of course, is what makes it so brilliant.

Love me, hate me, say what you want about me
But all of the boys and all of the girls are begging to if you seek Amy

OMG! If you say the title out loud, it sounds like “F-U-C-K me!” Okay, so this isn’t actually a good song – it’s just as bad as everything else Britney has ever sung-but-not-actually-written (aside from “Toxic”, which is still fantastic). But what makes it great is that it earned headlines on MTV and CBC, and prompted the Parents Television Council to call for the song to be banned from all radio stations. Let’s get this straight: over the past few years, Britney has been to rehab twice, attacked a photographer, married some dude in Vegas, and showed off her vagina in public (twice) – but after all that, she’s still able to shock us with a veiled use of the f-bomb? Are we worried about her corrupting our impressionable youth? I guess it’s okay if our children take a bunch of drugs, get married in Vegas, and then punch out the wedding photographers – just so long as they don’t swear at the alter. For the record, I definitely don’t want to if you seek a-Britney.