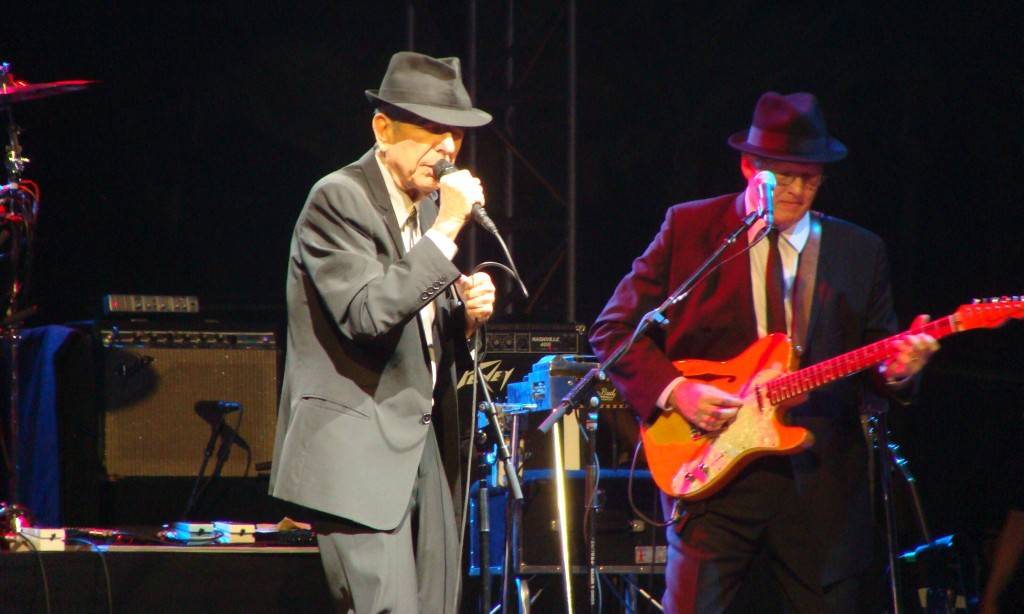 – photos by Shawn Conner (except where noted)

The big headliner of the first night of the 2009 Coachella Music and Arts Festival was, of course, that baby-faced ex-Beatle himself, Paul McCartney.

McCartney, though, seemed kind of tired, as though the opener “Jet” took it all out of him. He also said something about “rocking the roof” off the joint, which under the circumstances – it’s in an open-air polo field – well, mission already accomplished, Sir Paul.

After a rousing “Got to Get You Into My Life”, powered by a maniac of a drummer, the set descended into a half-hearted “Yakkity-Yak” and a medley of “Long and Winding Road”, “My Love” and “Blackbird”. But give the guy a break, I guess; as McCartney noted, the night was the anniversary of Linda McCartney’s death.

It being a festival, Morrissey – on the mainstage before McCartney – trotted out a few old Smiths favourites that even the rabble in the back might have been familiar with. That seemed to be his attitude, anyway, during “This Charming Man” and “How Soon is Now”.

Sadly, that’s about all I saw last night; however, I also heard that Leonard Cohen put on an amazing set, and was “way better than McCartney” from someone who saw both. 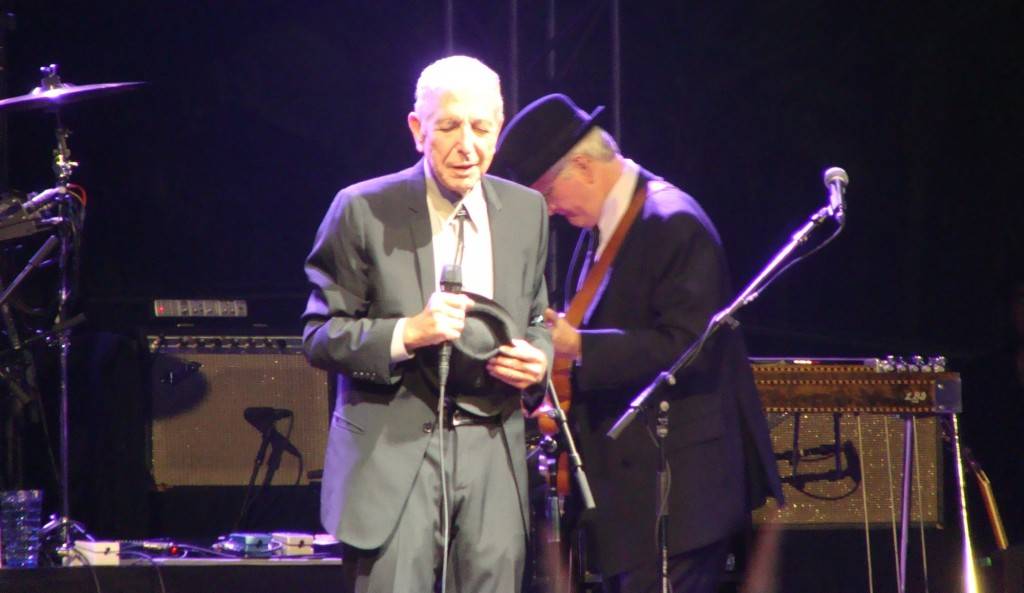 Superchunk kicked it out from the first song, and played 40 minutes of pure indie-rock dynamite. Not touring and playing intermittently means the band is hungry for it when Mac, Laura, Jim and Jon do hit the stage, so the 3-400 fans were treated to all the “hits” – “Precision Auto”, “Driveway to Driveway”, “Like a Fool”, and to close the set a rousing “Slack Motherfucker”. The newest song, “Learn to Surf”, which bodes well for a future full-length of new material, was as well-received as the old faves. 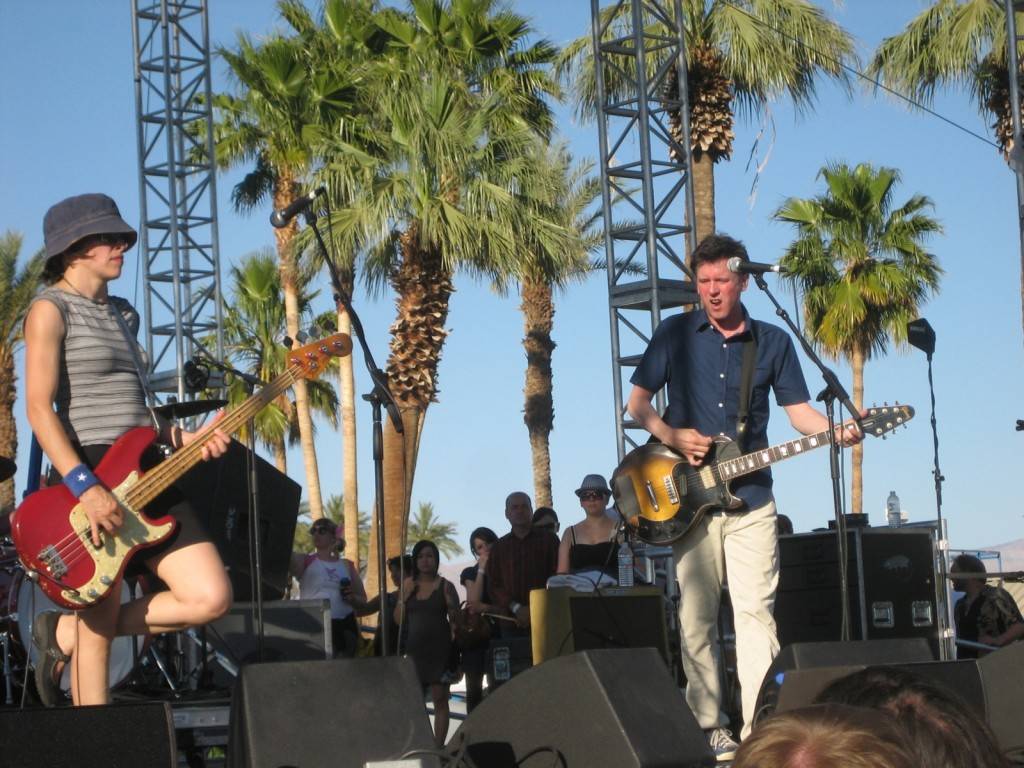 An empty Mojave Stage signified trouble – it turns out Glasvegas had canceled due to “dehydration” or some other rock ‘n’ roll euphemism. Tell that to Tinariwen, a band of desert dwellers who were having no trouble hypnotizing hundreds under the Gobi tent with Middle Eastern (sub-Saharan?) melodies. Take that, you wimp-ass Glaswegians. 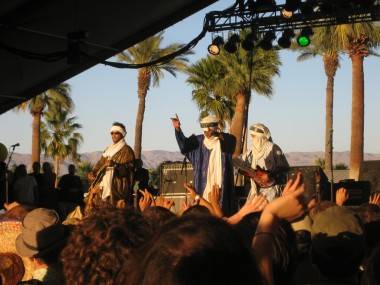 As any seasoned festival-goer can tell you, the best thing about these events is seeing something you wouldn’t otherwise even know existed. Tinariwen was one; the “vaudeville cirque” of the Lucent Dossier Experience was another. An L.A.-based theatre troupe, the LCD was like a mix of Rocky Horror Picture Show glam-rock and Cirque du soleil theatrics, including acrobats, clown makeup, choreography and nice tight buns. I couldn’t tear myself away for a good 30 minutes – a lifetime in music festival years. 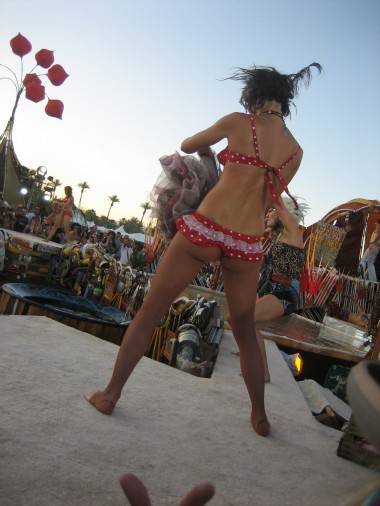 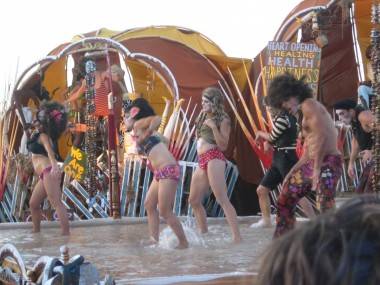 Jenny Lewis was singing backup when I caught the last song of TV On the Radio‘s set. Fleet Foxes started off far past folky, though the minute I started heading away the band started to rock out. (Apparently the Drive-By Truckers, besides playing their own set earlier in the day, were backing up Booker T around the same time as Fleet Foxes were playing.)

Can’t say much about Thievery Corporation, on the main stage, since I missed its set too, but M.I.A. put on a full-out show, with dancers, flourescent-tubed outfits, and plenty of big beats. Maya Arulpragasam is just a great performer, end of story.

That didn’t stop me from, again, missing most of her set (although I caught the last song, “Paper Planes”, which turned up the crowd’s energy tenfold), this time for Band of Horses. “Is There a Ghost” – love it! “Weed Party” – this is heaven! Next couple of songs, not so much – a little too mellow. Are these guys trying to be The Band?

Who else I missed: Jenny Lewis, Turbonegro, Crookers, Amanda Palmer, Bob Mould, and Blitzen Trapper (and those are just the acts I would’ve liked to have seen). Did catch an ounce or so of The Killers, the headliners on the mainstage, though. They opened with that goofy song “Are We Human or Are We Dancer” and took us back to the good old days, before they started wearing fur stoles, with “Somebody Told Me”. Eh. I can take or leave them, but what do I know? People love ’em.

Arriving late afternoon, we were in time to catch a Swedish smorgasbord: Lykke Li on the main stage with country mates Peter, Bjorn and John, to sing their hit (dance clubs, indie-rock bars, commercials) “Young Folks”.

Over at the outdoor stage, meanwhile, Antony Hegarty was singing pretty as a bird, just as one would expect, with a few string players backing him up.

At the Mojave tent people were geared up for X. The 32-year-old (!) band did not disappoint; performing what John Doe announced was an all-request set, the original lineup–the great Billy Zoom on rockabilly/surf lead, DJ Bonebrake breaking the skins, Exene and Doe harmonizing like the bastard offspring of Johnny Cash and June Carter, but with razor blades in their voices and lyrics–blasted through (non)hit after hit. 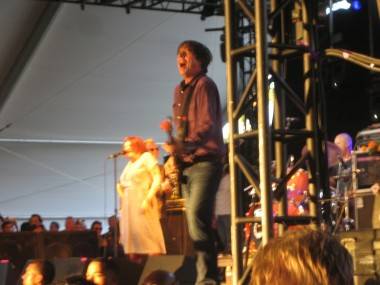 If you’re an X fan, or know their first two (and best) albums, then you’ll know this was a dream set: “Adult Books”, “Sex and Dying in High Society”, “Johnny Hit and Run Pauline”, “We’re Desperate”, “The Have Nots”, “Your Phone’s Off the Hook, But You’re Not”, “White Girl”, “The Once Over Twice”, “In This House That I Call Home”, and of course “Los Angeles” (for which the crowd went apeshit). Also: their take on Jerry Lee Lewis’s “Breathless”, surely one of the best covers EVER, and a ridiculously punk version of the Doors’ “Soul Kitchen”.

I could’ve left then, a satisfied festival-goer. But over at the mainstage, the Yeah Yeah Yeahs were reaching the end of their set, which included “Maps”. Someone would complain later about “the guitar tone,” but I didn’t notice anything except that Karen O remains one of the most charismatic frontpeople in rock. Also, someone said the trio had dropped “Human Fly”, the Cramps tune (RIP Lux Interior, 1946-2009), into their set.

My Bloody Valentine. Well, what can be said, except that the original shoegazer band sounded magnificent, and probably confused a fuck of a lot of people (I got a text: “These guys are bloody intense!”), especially when it ended its set with its 20 minutes of white noise feedback. I would’ve thought they would’ve toned it down for a festival crowd, but nope! Anyway, it was the stuff before that that was pure guitar-rock heaven, as the band filled the Coachella Valley with its wall of guitars, both jangly and feedbacky, and Belinda Butcher’s pretty voice and Kevin Shields’ gingery counterpart. But it was left to Debbie Googe, on bass, to provide most of the onstage energy, although when the band kicked into “Soon” and “Feed Me With Your Kiss” it didn’t really matter how still they were, the music was explosive. 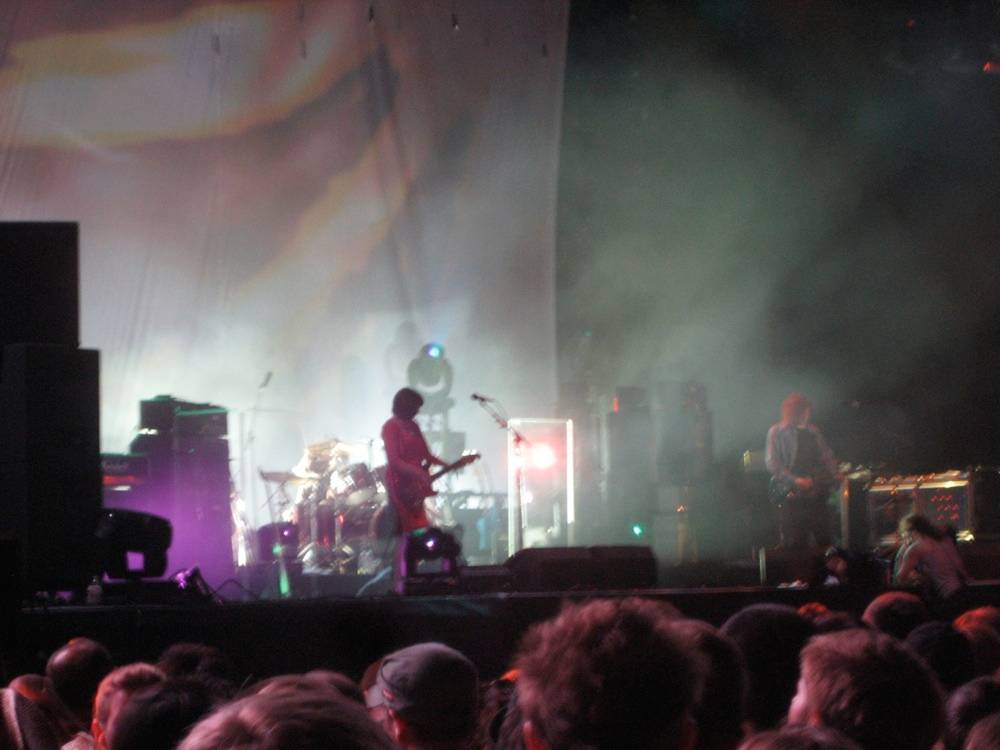 My Bloody Valentine at Coachella 2009.

And so Coachella came to pass for this reviewer (The Cure were on next, but I’m not a fan.) My first Coachella experience was a blast and, I hope, not my last.

One response to “Coachella Music and Arts Festival 2009”