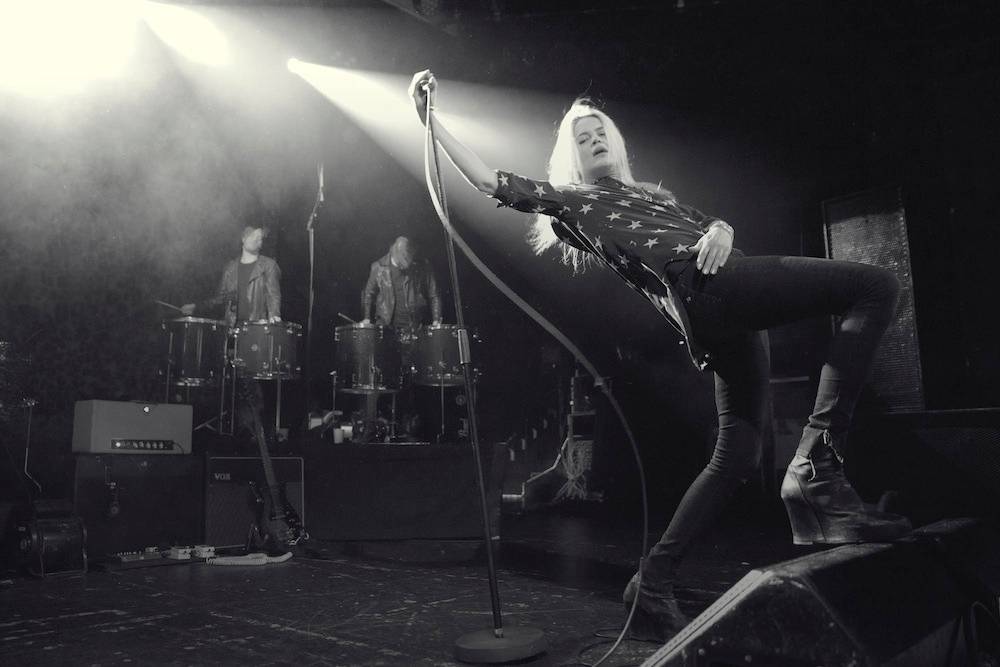 Review and photos – The Kills at the Commodore Ballroom, Vancouver, Oct 26 2014

Some people were born for rock ‘n’ roll. Going by their performance at the Commodore Sunday night, The Kills seemed to belong to that category. After seeing them electrify the venue with their confident, tough, sexy posturing and larger-than-life presence, it’s hardÂ to imagine guitarist Jamie Hince – aesthetically akin to a distinguished, ascot-ed Frankenstein – channeling his intensity into a computer screen. Or singer Alison Mosshart, who could cross the full length of a stage in only a few strides (and did several times this Sunday), being contained within a cubicle.

The leopard-spotted backdrop must have been inspiring: Mosshart and Hince – augmented by two drummers – attacked their hour-plus set like animals. Throughout the night, Mosshart spun and paced the stage, and dipped to impressive limbo-like lows with the microphone stand as her dance partner. She reclined elegantly on the stage right speaker during “Heart is a Beating Drum”. There was her signature thumb-biting, along with hair-whipping and pawing of her bleached-blonde locks. Early on in the set, during “Kissy Kissy”, Hince and Mosshart got close enough to nearly chew each others’ face off while shouting along into Mosshart’s microphone. The mixture of raw, carnal and creative energy between the two was increasingly palpable, and came out again during the encore performance of “Sour Cherry”. However it was the long, still stares, not the gymnastics and theatrics, that elicited the most ear-splitting roars from the packed venue.

The Kills opened with Midnight Boom’s “URA Fever”, and veered between hits off of the 2008 album like “Black Balloon”, newer material like closer “The Last Goodbye”, and decade-old, sound-defining songs from 2003’s Keep On Your Mean Side,Â including “Monkey 23” and “Fried My Little Brains”.Â “Tape Song” inspired one grown man to climb onto hisÂ friend’s back, take off hisÂ shirt, and writhe along.

Regardless of their genuine rock ‘n’ roll energy, and much to my disappointment, this spring The Kills confirmed that they are looking to completely change their sound. They cited dubstep and reggae as potential inspirations for the creation of their fifth full-length studio album. Although the follow-up to 2011’s Blood Pressures is still in the works, the duo is currently rocking the Pacific Northwest. Vancouver was the first of four stops on their brief tour along the coast, whichÂ ends with a Halloween show in Los Angeles.

More photos of The Kills at the Commodore can be foundÂ hereÂ and 2000.