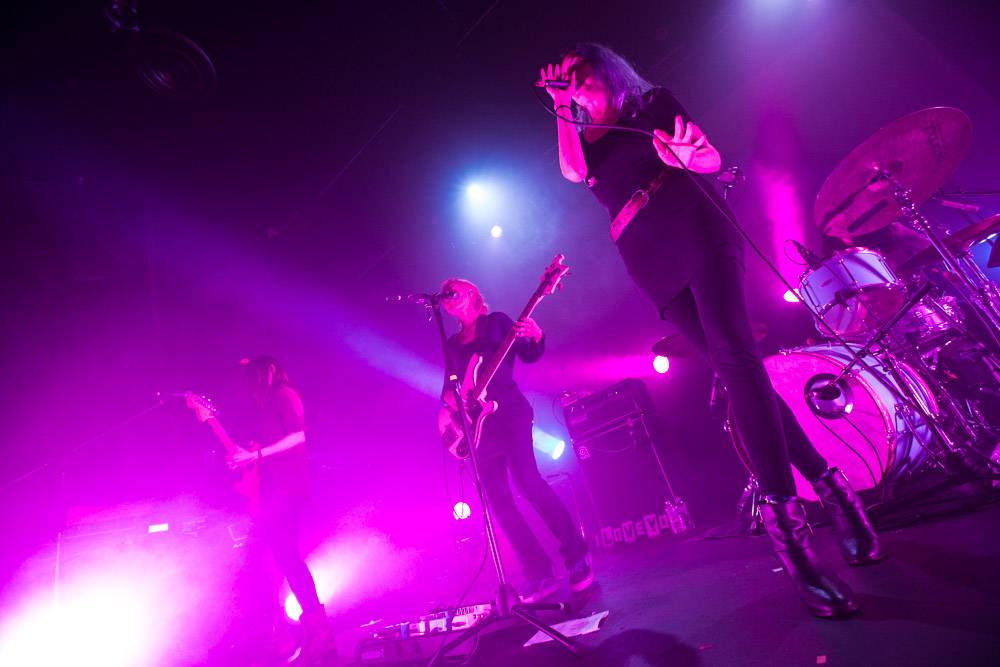 ByÂ 10 p.m.Â on Sunday night, after openersÂ James SupercaveÂ had finished their set, the lineup outside of the Rickshaw Theatre was still rapidly growing and extending towards the alley. It’s hard to say whether or not the controversial press had anything to do with the massive turnout at the Rickshaw this past rainyÂ evening for a Vancouver stop on the final leg of their North American tour; however, I doubt that anyone had regrets of venturing out to the DTES in the less than desirable weather.

For nearly two solid hours the women ofÂ WarpaintÂ heated up the venue with their own brand of sultry, groovy sounds and alternately breathy and falsetto vocals.Â An image of the cover art from their latest self-titled LP, released this past January, set the backdrop for a performanceÂ awash in a palette of saturated mostly turquoise and fuschia haze.

The L.A.-based quartet’sÂ stage presence had echoes of ’90s girl groups, including hair finger-combing, head-shaking and mild fist-pumping. The most genuine and passionate performance was definitely from bassist and vocalist Jenny Lee Lindberg. Aptly positioned front-and-centre on the stage, LindbergÂ rocked back and forth hypnotically, eyes mostly closed. From opener “Hi”, off ofÂ Warpaint, her musicianship and presence was a driving force, much like the persistent, mesmerizing bass lines that held the set together.

As odd as it was to see such outdated stage moves from such a young, vibrant group, the audience was undeniably engaged and some were even stirred enough to un-ironically fist-pump along with the band. During one of very few pauses between songs, Emily Kokal (vocals and guitar) gave a sentimental shout-out to Deep Cove before launching into “Undertow”, off of 2010’s The Fool, which was inspired by their stay in the city. (According to reviewer Ria Nevada,Â the song was composedÂ in Deep Cove when WarpaintÂ stayed with ex-drummer/actressÂ Shannyn SossamonÂ while she was working on a horror film.)

For the first song of their encore,Â WarpaintÂ reached back to their first EP,Â Exquisite Corpse (2008) and drummer Stella Mozgawa stepped out from behind her kit to join her bandmates andÂ show off their vocal harmonizing in a round-robin version of “Billie Holiday”. More bare-bones and mellow than the preceding set list, the girls channeled Chan Marshall and gave the audience (and themselves) a chance to catch their breath before rocking out in the equivalent of a sprint to the finish line for one final song.