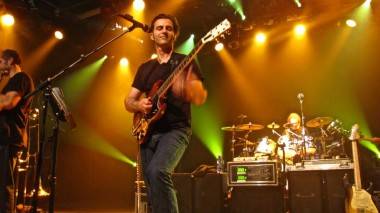 – by Caile Donaldson/photos by Felix Fung

It starts with an old man passing me a thick joint. “Welcome to your first Zappa show,” he says.

Is it that obvious this is my first Zappa experience? What gave it away? The fact that there are only three chicks in the audience and I’m one of them? The fact that everyone here looks like a stoner dad? The fact that I’m standing here wide-eyed in a state of face-meltedness?

Seeing Dweezil Zappa and Co. (“Co.” being a guy they called Thomas who sang uncannily like Frank and was a blend of comedic hilarity and intimidating instrumental skill, a chick sax player who was completely mental, and a percussion section that was not to be fathomed: bass and drums, respectively), well, it was one of those experiences I’ll be remembering while I’m dying and the DMT’s flooding my brain. Dweezil will probably be serenading my passage – it was that kind of jam.

(For the record, when grandpa handed me the joint, I’d been off the happy grass for a good six months. But if you ain’t gonna do it for Zappa, when will you? Besides, everything made a hell of a lot more sense after that.)

A huge thumbs up to the Commodore Ballroom. Whoever was in charge of sound that night did a phenomenal job. I was running to the back, I was pushing up front, and no matter where I was in that venue, I was immersed in pristine, flawless sound. (Of course, it didn’t hurt that the musicians were virtuosic masters of their craft.)

There were priceless moments between songs when Zappa Junior would share private reflections of his father, how he remembered his dad sitting down in front of blank sheets of papers and filling them with complicated musical notation.

The ease with which Dweezil played his guitar was incredible; he’d get this far off look in his eyes and you knew he shared a closeness with his dad during those moments. You felt that.

Dweezil definitely did not forgo the zaniness that Frank had made a staple of his live shows. Tony Clifton made an appearance, magically transforming into a Zappa fan, and there were cameos from Eric Cartman and a squirrel on acid. (Guess you’d have to be there.) The twisted sense of humor definitely runs in the family. And the fanbase.

There was even some audience participation, where the band wanted us all to dance like epileptics to those fast, weird notes (if you know the music, you’ll know what I mean). “Nope, too reserved,” Zappa shakes his head at us. You’re wrong there, Dweezil. None of us are too reserved, we’re just too stoned, and it’s your fault for making music so appropriate to get stoned to.

Eric Cartman made a point to mention the “clouds of weird smelling smoke.” At the beginning of the concert, I did see one security guard pushing through the crowd to try and find the source, but he must have realized he was the Dutch kid with his finger in the dam because eventually they just turned on their industrial fans and pretended like the whole place wasn’t hot-boxed.

Anyway, those were just some of the external elements of the performance. The whole reason any of us were there in the first place was for the music. I felt like pulling a Wayne’s World and bowing down. “We’re not worthy!” 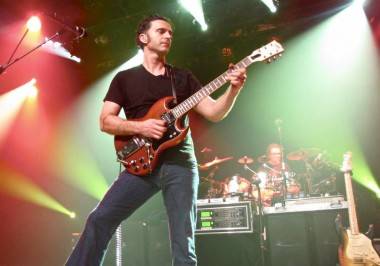 Dweezil takes his dad’s tunes (erotic-eccentric opuses of theatrical-jazz symphonies) and expands on them with drawn-out jams, even surpassing his father in sultry depth, made clear on old Mothers of Invention tunes such as “Trouble Every Day”.

I closed my eyes, I lost my mind, I freaked out, and afterwards we had to go loiter in the lobby of the Four Seasons Hotel to decompress and talk about what had just happened to us.

There was no opening band (“Who the hell would dare open that show up?” my friend Felix asked) and just when we thought the show was over, they came back out for a three-song encore, taking a well-deserved band bow at the end.

Anyway, do I need to say more? It was Zappa plays Zappa! Jesus.