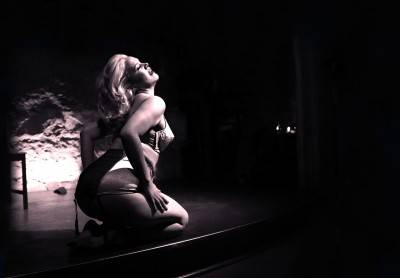 As our photographer Jess Desaulniers-Lea notes, “Each of them head several other collectives and events – April O’Peel is a producer of the successful Long Form Burlesque at the Rio Theatre and also president of Screaming Chicken Theatrical Society. Ruthe Ordare is a member of Pandora & the Locksmiths and an instructor at Vancouver Burlesque Centre, and Villainy LovelessÂ hosts This Ain’t Your Mama’s Bingo and the new hip-hop-inspired burlesque show NSFW: Hip Hop Meets Striptease. Camero Luvroc also runsÂ East Vanity Parlour.

In the words of Villainy:Â “Four blonde babes banded together to bring you an ASSortment of acts that prove blondes really do have more fun! The only thing these beauties have in common is the colour of their hair, so don’t miss the next Blondeshell Sexplosion!”

Their next show isÂ May 6 at Guilt & Co.