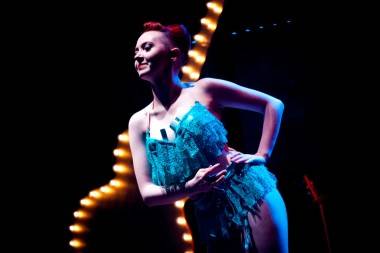 Blue Morris’ Beatles Burlesque was a true delight and a treat for Beatles and burlesque fansÂ FridayÂ evening, debuting on Granville for the first time at the Vancouver Fan Club. The sold-out show was as eclectic in its entertainment as the Beatles’ repertoire. It not only included burlesque veterans Veronica Vex, Melody Mangler and Calamity Kate, to name a few, but was approved just prior to the show for performances to include some pyrotechnics, which were a spectacle in themselves.

Morris’ renditions illuminated the bands sheer passion for Beatles music as well as their accomplished musical artistry. When asked why the guitarist, with so many musical influences, chose the BeatlesÂ for a production of this scale he said,Â “Why the Beatles and burlesque? Other than the fact that I am such a Beatles fan, it’s because the Beatles music lends itself so well to burlesque. There is such a great variety of sounds and styles in their albums –from the early rockers to the later experimental music, there’s so much to work with.”

Known comedic burlesque performer Connie Cahoots hosted (she also hosts Morris’ Rock n’ Roll Burlesque monthly at the Electric Owl). She amused us returning each time to the stage with an even more bold get-up than the last before transforming into the Queen of England, crown and all, lighting a bra on fire before the audience.

Her last transformation was unexpected and none other than Yoko Ono, reenacting Ono’s infamous performance art pieces “Piece Cut” in which Ono removed items of clothing with a pair of scissors. Connie removed her clothing with scissors but then turned the voyeurism on the crowd asking them to take their pants off and photograph their bums.

In an email, Cahoots wrote, “I love the Beatles more every time we do the show. Their music has an effect on people. It’s great to see the crowd up dancing right along with us – this does not happen at every burlesque show. It’s also nice to see the die hard fans singing along to every word of every song. Beatles Burlesque is a feel good show- sexy, fun and nostalgic.”

Needless to say, there was something for everyone in this production, from sultry and slow stripteases to classic rock n’ roll and shimmying. But despite the singing-and-dancing of the audience, Morris’ avoided the usual clichÃ©s of a Beatles cover band by simply doing things his way while still retaining what made each Beatles song memorable lyrically and melodically.