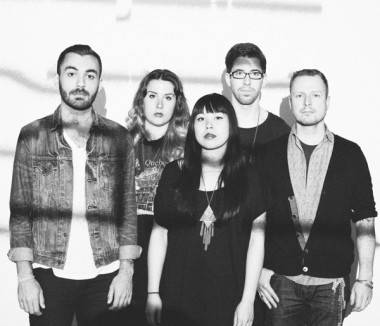 Vancouver’s the Belle GameÂ have gained a lot of exposure since they won Shore 104.3 Song Search Fan Favorite Award for the tune “Tiny Fires” off their debut EP, Inventing Letters.

In the last two years, the band has opened for the likes of international pop singer Gotye and Polaris Music Prize winners Karkwa, and just last month they played South By Southwest. And, on April 16 the band will release its first full-length album, Ritual Tradition Habit. Produced by John Raham, the album’s twelve tracks range from “Wait Up For You” which is uptempo yet melancholy, to “River”, which might make you want to curl up and cry a river.

I met with Belle Game vocalist Andrea LoÂ and guitarist Adam Nanji at 49th Parallel, a coffee shop in Vancouver’s West Side. We discussed the South By Southwest experience, the concept behind the video for “Wait Up For You” and the ambience of Raham.

Andrea Lo: It was a big emotional roller coaster in terms of how we were received. We were received well, and everyone who came out to watch was warm and wonderful, and very friendly.

But as one of our friends put it, in terms of sound and everything on stage, we were kind of fed to the dogs.

Adam Nanji: A lot of highs and lows. Unless you’re Justin Timberlake you’re not a big fish there. Every time you go on stage you’re at the mercy of whomever has been assigned to work that night, so we had two shows that were less than perfect. But we got through them and it was fun. We had two shows that were great. The people that ran Canada House – the last show we played at South By Southwest – were awesome. It was just such a good time, and it was sold out. Also, there was free food.

AL: It was on Sixth Street, so it was in a busy area too. It was like Mardi Gras. Just imagine this whole block that’s filled with people and you’ve got shows going on. People are curious, and they can just wander in off of the street because they can hear the music from outside.

AN: It’s definitely like boot camp. You’re lugging your gear from venue to venue in the hot sun. But it was good. I’d do it again for sure, especially now that we know what to expect.

MW: You mentioned a lot of highs and lows in terms of sound issues and audience response. How much does that affect your performance? When you’re in it are you hyper aware of those things or do you just say screw it, we’re just going to do this and not let it get to us?

AN: At a certain point you just have to say screw it.

MW: But does it affect you? Rationally you have to say that but do you feel it? You’ve got to feel it.

AL: [laughs] It definitely affect us. It’s really important that I can hear myself in the monitors, and at one of the shows, I didn’t have a monitor. So it was a lot of walking up to the front of the stage and trying to take in as much of the house sound as possible. But you just kind of have to power through it and trust that things are going to be fine.

AN: And I think that with our band there are a couple of sides that we can play in terms of how we perform. Are we a rock band tonight or are we a downtempo, sad band? In those situations we can’t ideally be who we want. We kind of have to say okay, we can’t hear anything, and it’s loud and its messy, so tonight lets be the rock ‘n’ roll version of the Belle Game. 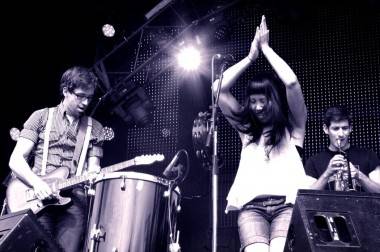 MW: Where did the concept for the video for Â “Wait Up For You” come from?

AN: We met the director, Kheaven Lewandowski, through friends whom he did a video for. We talked to him about the concept of the album and the concept of the song, and what type of video we wanted to see. He pitched a couple of concepts and they all had horses for some reason.

He emailed us three or four concepts and a day after he was like, “No. I have the concept. It’s this one.” And he emailed us with the concept the video ended up being and we pretty much didn’t change anything about it – a couple tweaks here and there. We just wanted to represent what the song is about without doing exactly what the song talks about. We wanted to make sure it was the same story told in a different way, I guess.

MW: So what’s the story?

AN: Yeah, so what’s the story Andrea? Andrea wrote the lyrics.

AL: [laughs] Well, it was the first time I put pen to paper, and attempted to write a song.

Basically it’s about two characters who are in love and they’re young and they kind of break free from the suffocating, restrictive, restraints of their families. When they do make their escape, one of them becomes reckless with freedom and that affects the other person. The song is just about that whole tumultuous time. Just think about kids going off to college… birds leaving the nest.

MW: If you had to pick one record that inspired you to get into playing music, what would that record be?

Karen O… man, the way she approaches her music. It’s so unique, especially during that time. I don’t know what the hell was on the radio.

MW: How about you Adam?

AN: When I was a kid I just liked classic rock and punk–the things that kids usually like. But I think the album that made me go “This is the kind of music I want to make” was the second Broken Social Scene album (You Forgot It In People, 2002). I remember I bought it, I listened to it and I hated it. I was like, this is such garbage. I think I was only 13. Then a year later I put it on and I just couldn’t even handle it. I was amazed by every song.

MW: Any pre-show or pre recording rituals? It doesn’t have to be super weird, just things you do to get yourself psyched for playing or recording.

AL: We get really stoked whenever we’re around John Raham.

AN: Yeah, the guy who produced our record. He takes care of all that. He has such a way about him. It’s like he’s it. You know how they show Behind the Music with, like, Fleetwood Mac, and they’ve got candles and Persian rugs and stuff? Well, he’s just that.

MW: [laughs] You mean, he’s the physically embodiment of all that stuff?

AL: He’s just a good feeling – very calming. As long as we have John Raham things are just fine.

MW: Well, It’s a good thing you didn’t have Phil Spector produce your record. He’s not a very calming producer.

A 7″ with “Wait Up For You” and “Wasted Light”, distributed by Vancouver’s BoompaÂ Records in conjunction with the UK’s Bella Union (Beach House, Father John Misty, Flaming Lips) is now available at the Boompa online shop and at Zulu Records in Belle Game’sÂ hometown of Vancouver.

You can also see the Belle Game live with Hannah GeorgasÂ  April 26 at the Rio Theatre in Vancouver (the April 27 show is sold-out). For more info or to order tickets visit the Belle Game website.