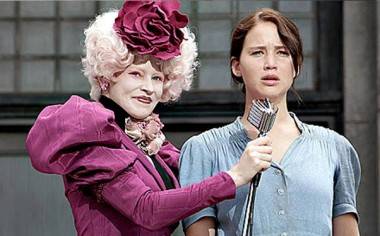 Elizabeth Banks and Jennifer Lawrence in The Hunger Games.

There was a time when a dystopian-set science fiction film like The Hunger Games would have been 30 minutes shorter and filled with three times as much story.

Alas, we live in the age of the serial blockbuster, where producers and studios find a property with a massive built-in fanbase and streeeeeetch it out to its breaking point. Witness the Harry Potter and Twilight series, neither of which had the decency to wrap up their climactic story in a tight little package but instead divided their denouements into two cashgrabs. (Believe it or not, the Twilight saga isn’t even over yet – the second part of the last part hits theatres in November!)

The Hunger Games, based on the YA bestseller by Suzanne Collins, is of this ilk. The flick spends nearly as much time on the set-up as it does on what should be the main story, the battle-to-the-death amongst 24 teenagers. We’re talking two-and-a-half hours here, folks, for what is essentially a commercial for the next two (at least) parts.

AndÂ The Hunger Games looks like every other blockbuster. Fast cuts, washed-out colours, and moments of sincere, unconvincing emotion make the movie seem even longer and duller than it is. No attempt has been made to give it a distinct style – even the the society’s overlords or whatever they are look as though they have been outfitted in leftovers from other, better science fiction movies.

The plot of the movie, which is set in a future when the lower classes have been suppressed and are forced to sacrifice a boy and a girl to the annual bloodbath The Hunger Games – which aren’t really games and don’t involve hunger – has more holes than a mini-doughnut stand and wastes fine actors like Woody Harrelson and Donald Sutherland with dialogue that is banal even by science fiction movie standards. At this point Sutherland has chewed more scenery than a herd of giraffes, but you can see Harrelson, as the now-he’s-alcoholic, now-he’s-not mentor in charge of coaching our 16-year-old heroine, itching for just one good line.

When the movie finally does get around to teens fighting teens, the war takes place in a forest that looks like it’s outside Squamish. You’d think whoever set up these “games” could have designed a better, more interesting arena. The film takes no chances on a possibly unsympathetic protagonist – even though the absurdly named Katniss Everdeen (because of course everyone in the future is named by Chris Martin and Gwyneth Paltrow) is supposedly a dead-eye shot with a bow, it might risk turning off one member of the audience by actually showing her killing something. And don’t get me started on the actual fight scenes, which are blurs of incomprehensible motion. I mean, why not hire a fight choreographer and do it up right?

Jennifer Lawrence, as aforementioned warrior Katniss, is easily the best and most enjoyable reason to see The Hunger Games. She shines with conviction in every scene she’s in, even when put together with charisma voids like Josh Hutcherson. 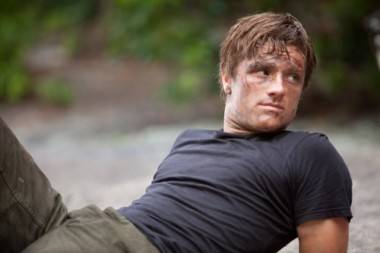 But hey, don’t take my word for it. A glance at The Hunger Games‘ Rotten Tomatoes page shows that this reviewer is, once again, out of step with his fellow critics. Just about every other film scribe seems to have seen a different movie than I did – one that is “exciting and sometimes intuitive”, “compelling”, “thematically provocative” and “deeply felt” (whatever the f that means). Good for them; they can look forward to the inevitable sequels, includingÂ Catching Fire, in 2014, Mockingjay Part 1 in 2016 and Mockingjay Part 2 in 2017.