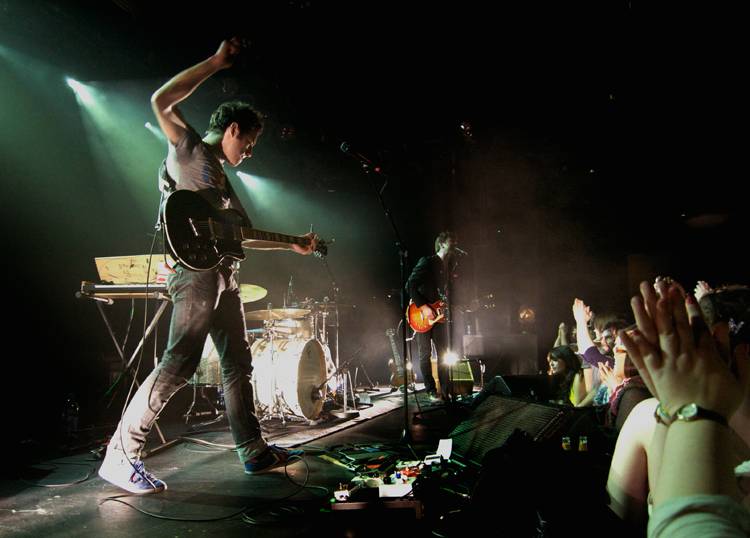 Review and photos – Plants and Animals at the Commodore Ballroom, Vancouver, Feb 18 2011

Due to a number of unforeseen circumstances, i.e. the clutch blowing on a normally very happy little VW, this reviewer missed the opening act. Apologies Yukon Blonde. If it means anything, a random audience poll (consisting of the drunk guy standing beside this reviewer) yielded the result of “Aaaaaaigt.” Roughly translated, “You put on a good show.” Well done.

Although it was not sold out, the Commodore was still reasonably full for Plants and Animals. A little slow to warm up, they started to hit their stride about three songs in. The crowd down front was loving every second, literally hanging off every chord and word. Proving that it is never to soon for a clap-along, “Good Friend” had the audience going strong.

Watching Nicolas Basque play was like watching a hummingbird. Crouching over his guitar, his strumming hand was moving so fast it was a blur. Matthew Woodley’s drumming is the spine for this band and watching him live only reinforced this.

Plants and Animals sprinkled the show with a couple of new songs that were politely received. Sensing a certain disconnect, they continuously bought the audience back on side with familiar tracks. A rousing version of “Bye Bye Bye” prompted more audience interaction, this time singing as well as clapping  along.

Sound-wise, the show was okay. At times singer Warren Spicer was almost inaudible with his stage banter. However everything else sounded fine.

The second half of the set was an absolute improvement on the first. Despite the couple who decided to stand next to this reviewer and scream abuse at Plants and Animals for the duration of the show, it was an enjoyable performance.

All in all the gig didn’t set the world on fire but this was really one for the hardcore Plants and Animals fans. And they loved it.

One response to “Plants and Animals at the Commodore Ballroom”