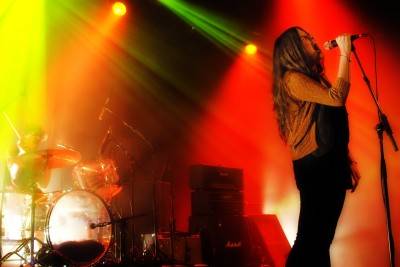 Having gone to a few sold-out shows in the past month, I made it a point to be especially early for the first of two Black Mountain shows at the Commodore Ballroom. As soon as the doors opened, I hurried in to claim a table with a view. As it turned out, I didn’t have to worry about finding a spot; the Christmas-y venue was fairly empty, with the exception of googly-eyed couples sharing drinks and sweet nothings.

But in the next half hour, the room got increasingly louder and busier, and the turnout started to look more like the scruffy cast of Easy Rider (it was the last day of Movember, after all). Fans wore their tie-dye, vintage T’s, and hemp ponchos proudly, rocking out to the blues-y house music.

The dance floor was completely packed leading up to Black Angels‘ set. They had barely taken the stage before immediately diving into “You on the Run”, a dark and trippy track that took cues from early metal. Alex Maas‘ powerful, nasal tone (akin to the voice of Rush‘s Geddy Lee) stood up to the dominating bass line of Kyle Hunt. 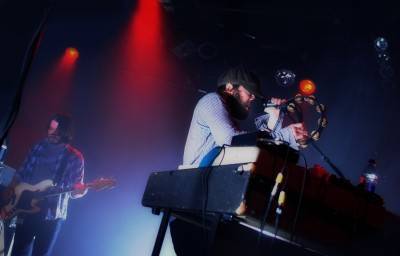 The Black Angels at the Commodore, Nov 30 2010. Emmanuelle Prompt photo

Ignoring one or two crowd members’ requests for “Free Bird”, the Austin, TX band played a lengthy set of its own self-coined “North American drone ‘n’ roll”. The material confirmed that the Black Angels share more than an adjective with Black Mountain, but also a clear reverence for ’60s psychedelic rock.

The riff-based “Bloodhounds On My Trail” summoned images of Canned Heat at Woodstock, with an indie-garage spin. In between spiraling licks, guitarist Christian Bland thanked the audience for their enthusiasm in his adorable Austin-twang. The rest of the group remained rather stone-faced, despite their emotive songs.

The middle of the set started to get a little stagnant until the Black Angels changed things up with “Telephone”, a short and sweet surf-rock jam, and a standout on their latest album, Phosphene Dream. They added a nice little surprise on the outro, alluding to the iconic bass-line of the Beatles’ “Come Together”; a strong finish to their already solid performance.

The lights brightened in the ballroom as the crew moved around hills of equipment for Black Mountain. Eerie choir chants morphing into industrial drum beats cued their entrance. All the spaced-out deadheads at the show immediately perked up for “Wilderness Heart”, the title-track of the Vancouver band’s latest record.

Singer/guitarist Stephen McBean, with his gritty power chords, and drummer Joshua Wells built a strong momentum early on, but vocalist Amber Webber seemed less sure of herself. This was surprising considering the brazen timbre she brings to their recordings. Barely looking at the audience, and awkwardly dancing through her peers’ solos, she caused some discomfort in this reviewer.

Fortunately, Webber seemed to loosen up by the time they played “Wucan”, a hypnotic tune that anyone could easily “turn on, tune in and drop out” to. They continued with a few more tranquil numbers like “Tyrants” and “Buried By the Blues”, allowing McBean and Webber’s bang-on harmonies to shine. Their poetic and mythical lyrics were actually distinguishable on these two; maybe it was where I was standing, but the vocals were drowned out in the speakers for most of the night.

The energy may have died down a little too much at this point, and one fan prodded the band to tell a joke, to which they replied, “We’re much too serious”. However, they did shake off their stern presence on the funk-flavored “Druganaut”, an obvious crowd-pleaser.

Blame it on the strobe lights, the ambient synths, or the questionable smoke in the air, but I couldn’t believe four hours had passed by the end of the show. While I am thankful to Black Angels and Black Mountain for their generous performances, I will be even happier when the bell choir in my ears finally cease and desist.