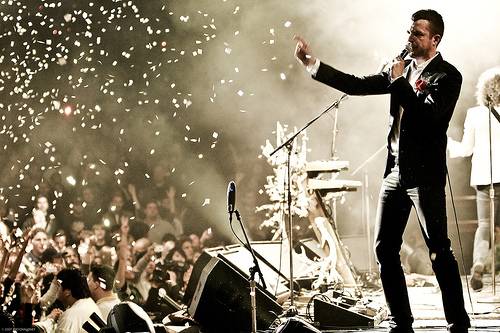 Two charismatic frontmen proved that one isn’t always the loneliest number last night at the Commodore Ballroom. In fact, the sold-out show proved that by going it alone you get to showboat all you want without having to share the spotlight, both literally and figuratively.

On the literal front, the raffish lead singer for Scotland’s beloved Travis, Fran Healy, started out the evening all alone with a solo acoustic set. The unassuming Healy, who dealt graciously with some loutish yobs yelling for “Brandon” while he was in the midst of a low-key, intricate instrumental – leaving the rest of the audience cringing with embarrassment – nonetheless went on to display an amazing vocal range in tunes that veered to the folky end of the Britpop spectrum. He even sang both sides of a duet he had written for himself and Neko Case.

When the aforementioned yobs wouldn’t pipe down he gave in and played a couple of Travis favorites to fire up the crowd, ending with a brilliant “Why Does it Always Rain on Me?”. It was unfortunate that he seemed to have to justify his presence on stage to ignorant yahoos: his new solo work was thoroughly heartfelt and beautiful, and left this reviewer desperate to hear more from this underappreciated Britpop legend.

Between acts you could see that this was one diverse group of people – older ladies all tarted up, couples in their 30s, and a large contingent of preppy gays – but the second Brandon Flowers stepped on stage it was immediately clear he can and would be everything to everyone. The diminutive Killers singer and famously Mormon showman was part Ricky Martin, part Simon Le Bon as, unencumbered by a keyboard, he leaped all over the place while keeping intact his incredibly strong, distinctive voice.

It was an arena-rock show distilled, but not reduced, for an intimate venue, and as such it was incredibly powerful, and really really fucking loud. With no need to woo the audience with Killers hits he played most of his new album, Flamingo, that while really fun to listen to, does not stray too far from the Killers sound. If you hate the Killers, you would hate this show, but why would you be there?

The end of the set gave us “Human”, followed by a rousing “Losing Touch”, both off of Day and Age. By this time Flowers’ lower range was starting to creak but no one really cared, as the encore brought on the Hot Fuss action with a “Mr. Brightside” to shut the place down. While I would pay the money to see just Fran Healy again, Brandon Flowers proved that he is an undeniable rock star in his own right. Now it just remains to be seen how incorruptible this young father of three can be in the face of all this adoration.

6 responses to “Brandon Flowers at the Commodore Ballroom”