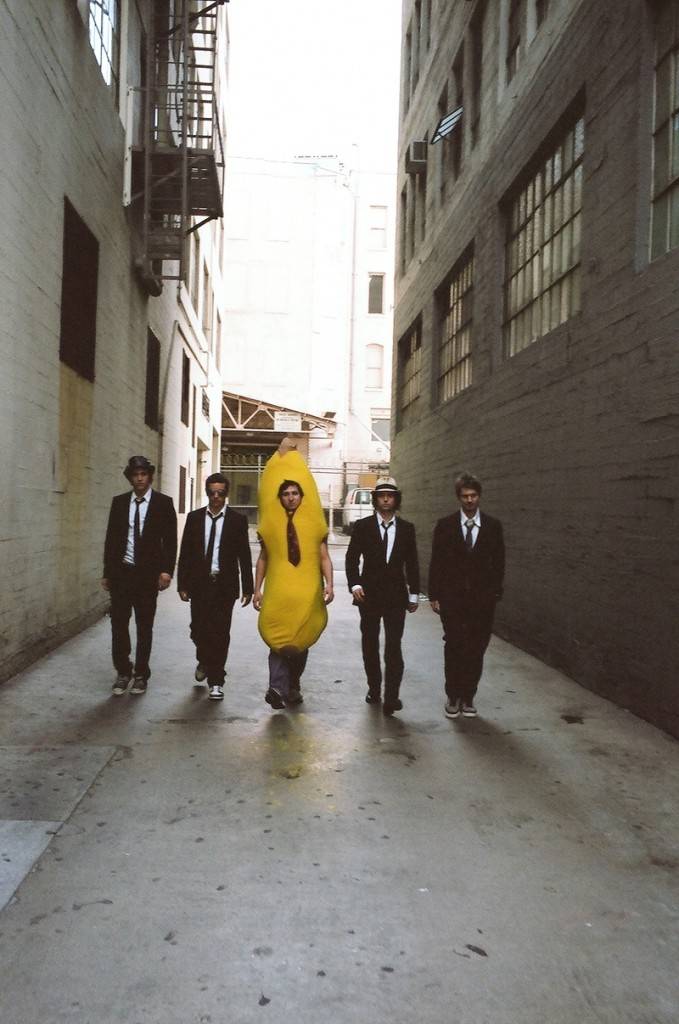 JA:Â  I’m 20 per cent of the Monkeys, because there’s five of us. I do what everyone else in the band does and I play each instrument, uh, and that’s what I do. And I create fun.

JA:Â  I’m sitting in a car, and we just left Tulsa, Oklahoma and we’re driving to Denver, Colorado.

RF:Â  Grassroots, that’s nice.Â  You’ve got a new album, Grape, which came out November 29, 2009. It’s your first studio release, fourth album. Tell me, why Grape, why not Banana–are you fooling with me?

RF:Â  Tell me, was that a group decision answer or was that one particular moment of Monkey inspiration?

JA:Â  As far as calling it Grape?

RF: That’s pretty awesome. How’s it different with a studio album–the recording process? It says on the website that you guys recorded on the road, kind of grassroots. Can you tell me a little bit about the difference between your other albums and the process for this one?

JA:Â  The first albums we did–one was completely improvs[ised], all in one take–that was Monster De Lux. Jay–Jackson Rathbone–he would pretty much roll out of bed and we’d have it all set up. We’d recorded a track and then we’d say, “Hey, put lyrics on this” and he would go [do it] and then that’s the song [laughs].

So that’s how that one was recorded. The next few, the Creative Control Live Session–that’s pretty much us jamming. We played a few songs that we had written but it’s a live recording, there wasn’t any going back to try and perfect the take. And then the studio album was much different, where we tried to perfect the takes, we got the tones correct, we worked on the structures of the songs and we really tried to nail it in a studio situation.Â  That’s the difference.

JA: So far, it’s been awesome. From the first few dates that we’ve started our audience has increased and the energy level is getting better because people have started listening to Grape and they sing along as we play and it’s just been–we’re all on cloud nine from the stage. We have smiles that we can’t get rid of.

RF: Aww, that’s sweet. So you’ve played obviously, in Vancouver before–of course Vancouver is something of a Twilight Mecca –is that correct? Can we say that?

RF: Is having this huge spotlight–having one of the members of your band in this pop-culture phenomenon–is that good for you? Does it get annoying or detract from what you’re trying to do as musicians?

RF: I’m curious about the audience. I did go to an ‘N Sync concert once–

RF: I saw an encore. I was actually doing some promo work and I snuck into the venue. The thing that really surprised me about the show was number one, I didn’t think they were in sync, and number two, there was just so many young girls [children] there. I thought it was kind of strange. You’re not really having that kind of thing as you’re playing different kinds of venues but–do you have that? What’s your reaction to that–the fandom?

RF: Oh no–you’ve heard that before, or you get it a lot?

RF:Â  What can I say–My So-Called Life–I’m of that age. All of you guys in the band have this other part-time, dÃ¶ppelganger life as actors that I was reading about on your website. You improvise a lot and bring it onstage with you.

JA: You know what–yeah. We go into extended jams onstage. We make up songs that we get from the audience. Those songs that we make up are purely a jam that comes out of this air on the fly. I wouldn’t classify us as a “jam band”, but that was our roots, for sure. We used to play and never have a single written song. We’ve been writing songs since we recorded studio album, and we’re less of a jam band now.

JA: We’ve been obsessed with the Rolling Stones lately. We’ve been watching a lot of their performances. A lot of what we’ve been doing in the van is watching DVDs of performance, because we’re obsessed with performance on top of the actual music.Â  I’m actually watching the Kings of Leon right now. We watch everybody from Prince to the Doors to Michael Jackson and Jimi Hendrix… anybody who was a great performer, we’re taking notes and soaking it in.

RF:Â  That could be the difference. You could be 100 Monkeys in Sync or Synced Monkeys or something to that effect.

RF: One final question–We have the Monkees, we have Arctic Monkeys, we have 100 Monkeys [not to mention Fight Like Apes–Ed.]–what’s going on here?

JA:Â  You know what–the name actually started in the living room of Ben [Graupner] and Jackson, they were roommates. It just was a name that they kicked around. The name 100 Monkeys is a theory of collective consciousness, and what we’re attempting to do through a few people liking what we’re doing to growing contagious on a big level.

RF: Oh, Â I like that. In my mind I thought, 100 Arctic Monkeys but that would be too obvious.